McCarron: Federal Intervention a Must 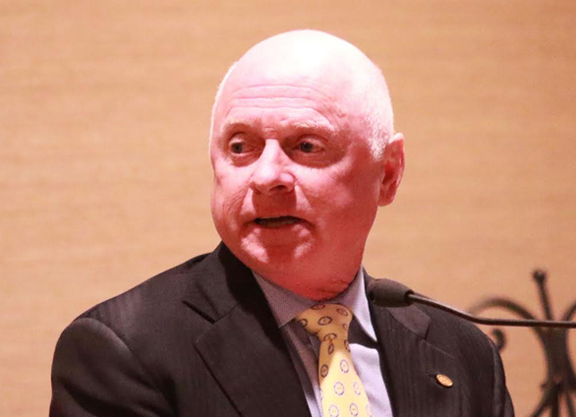 Hall of Famer Chris McCarron became just the second jockey recognized as an Honored Guest by the Thoroughbred Club of America, and used his platform at Sunday night’s 85th annual Testimonial Dinner to urge the adoption of a federal bill to establish a Thoroughbred Horseracing Anti-Doping Authority.

“The status quo is not working, folks,” said McCarron. “Uniform medication rules across the country is a must. I know most people in this room don’t want the federal government to get involved. But we don’t have another avenue. Every other effort has been exhausted and pushed aside.”

With only 20 of the 38 racing jurisdictions having voluntarily adopted the Racing Medication and Testing Consortium’s National Uniform Medication Program, McCarron said the industry needs to do more to protect its equine and human participants. He alluded to the ongoing case of Marcus Vitali in Florida, noting the trainer “has 46 medication violations in his career-23 in Florida alone,”and yet, “is still being able to ply his trade.”

Said McCarron, “It’s a hard, cold fact. There are a lot of horses out there running who shouldn’t be running. And the authorities in this business need to grab hold of those horns and do something about it…and soon.”

McCarron added that the cost of operating a racing stable puts pressure on owners, who then apply pressure to trainers to run unsound horses who should otherwise be out of training.

Examples of racing’s disjointed regulatory structure are easy to find, he said, offering the example of software programs like The Jockey Club’s InCompass that allow racing secretaries to share information quickly and easily, such as which horses are on vets’ lists. But such programs aren’t being utilized in many jurisdictions.

“You can take a horse from California who is on the vets’ list, and run him in Arizona,” said McCarron. “They’ll take the entry. Same thing with New Mexico. This is ludicrous.”

Other jurisdictions suffer from lax medication rules, he said. “In Oklahoma, you can run a horse on Bute and Banamine on the day they’re in [to race],” said McCarron. “This is crazy.”

One result of America’s patchwork of rules and regulatory bodies is an increased danger to jockeys, said McCarron, who noted a study by the American Medical Association, conducted 10 years ago, that that revealed there are 35 accidents a week involving jockeys.

“It could be anything to being stepped on in the paddock, to getting flipped on in the gate, to hitting the deck at 40 miles an hour,” McCarron said. “Worse yet, on average, two jockeys are killed each year, and two more are paralyzed. We’ve had three paralyzed already this year. There’s a multitude of reasons this is happening, but the number-one reason is discretion.”

Said McCarron, “I’ve been to Washington DC six times, walking the halls of Congress, in support of HR-3084, which would give the government the right to assign USADA [United States Anti-Doping Association] to be the governing body of [racing medication and testing] in this country. This bill is supported by Keeneland, the Breeders’ Cup, WHOA [Water, Hay & Oats Alliance], the Coalition for Horse Racing Integrity, and The Jockey Club.”

McCarron said two downward trends in racing should be a wake-up call for racing’s leaders: the decline in starts per horse, and the decline in the number of tracks in the U.S.

“Back in the ’70s, the average annual starts for a Thoroughbred was 14,” he said. “Today, career starts is approximately 11. Due to the fact that horses don’t run as often as they used to, field size is greatly impacted. And when that happens, fans don’t want to bet on 5–and 6-horse races. They’ll look elsewhere to enjoy their leisure money.”

McCarron added, “When I was a kid growing up in Boston, there were 17 racetracks [in the region]. There’s one left [Suffolk Downs]. I think they ran three days this year to keep their license. Forty years ago there were seven or eight Thoroughbred tracks in South Florida. We’ve got Gulfstream left. Calder’s there, but it’s just a track–no grandstand. I broke my maiden at Bowie on Feb. 9, 1974. It’s going to be houses soon. I won my last race at Hollywood Park, the new site of the L.A. Rams football stadium.”

McCarron concluded by urging those in attendance to advocate for change.

“I truly believe that there are enough people in this room with the power to cause change to happen,” he said. “And for the good of the horse, the good of the participants, and the integrity of the game, something’s got to give.”

The night wasn’t without humor, however. McCarron began by thanking the late Bill Shoemaker for taking off John Henry in 1983, as well as, “Pat Day for taking off Alysheba, Jerry Bailey for taking off Go For Gin, and Victor Espinoza for taking off Tiznow,” he said. “Thank you guys–you furthered my career. And I want to give a shout-out to Gary Stevens, for my bonehead decision to take off Silver Charm after riding him twice.”

McCarron talked about filming a scene for the movie Seabiscuit, when his mount, depicting War Admiral, kept beating the would-be title hero, who was supposed to draw off by daylight in their famed match race. An irate Gary Ross, director of the film, stormed over and asked McCarron to explain why his mount kept winning the staged race.

“What can I say, boss? I’ve still got it,” said McCarron.

McCarron was preceded at the podium by his daughter Erin, who used a blend of humor and poignant memories to introduce her father. She told of the time the McCarron family appeared on the gameshow The Family Feud, only to earn zero points (“They didn’t get one question right”), and of the time the New England Patriots coach Bill Belichick used a video of Tiznow’s Breeders’ Cup Classic win in 2001 to show his team the meaning of perseverance.

“You can’t stop fighting the good fight–you have to go to the very last second, and have to fight with everyone you’ve got: that’s basically the motto that my dad taught all of us,” she said. “He always taught us that we always needed to be our best. Not the best, but our best. And he taught us that everything had value: every person, every animal had value.”