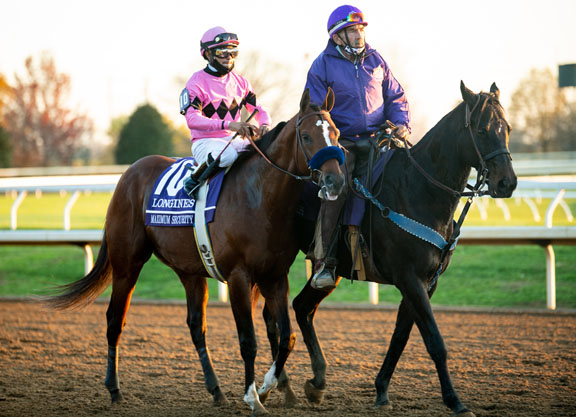 Eclipse Champion Maximum Security (New Year's Day–Lil Indy, by Anasheed) has been retired from racing and will stand as Coolmore's Ashford Stud in Central Kentucky for the 2021 breeding season. His fee will be $20,000.

“Maximum Security was an exceptional racehorse and I have no doubt that he will prove very popular with breeders once they see him,” said Ashford's Director of Sales Charlie O'Connor. “He's an extremely impressive-looking individual.”

Named champion 3-year-old colt in 2019, Maximum Security retires with an official record of four Grade I scores, including the Florida Derby, Haskell Invitational S., Cigar Mile H., and Pacific Classic S. He was last seen finishing fifth behind stablemate Authentic (Into Mischief) in Saturday's GI Breeders' Cup Classic, the only time in his career he had crossed the wire worse than second. As has been well documented, Maximum Security was disqualified to 17th for interference after crossing the finish line first while undefeated in the 2019 GI Kentucky Derby. In addition, $10 million in prize money from his win in the Feb. 29 Saudi Cup is being withheld pending the outcome of charges against his then-trainer, Jason Servis, who was indicted for using performance-enhancing drugs. Maximum Security was moved to the barn of Hall of Fame trainer Bob Baffert after the Saudi trip to register wins in the Pacific Classic and GII San Diego H.

Bred and raced by Gary and Mary West, Maximum Security retires with a record of 14-10-2-0 and earnings of $12,431,900 (including the Saudi Cup). It was announced at the beginning of 2020 that Coolmore had purchased half-interest in both his racing and breeding rights. He is available for inspection by breeders at Ashford.