Maximum Security Gets Back On Track in Haskell Score 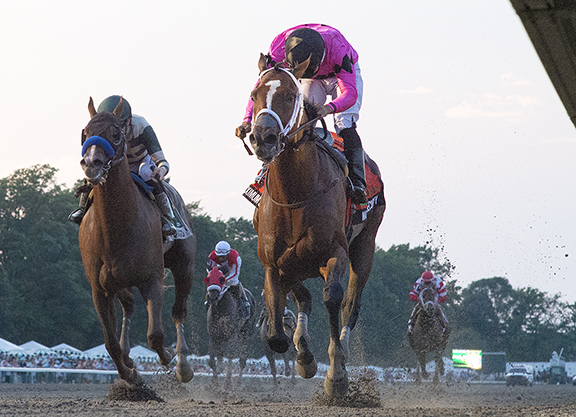 Considering his involvement in one of the most surreal moments in racing history, it was only fitting that Gary and Mary West's Maximum Security (New Year's Day) would be the one to come out on top at the end of a GI TVG.com Haskell Invitational S. that was not without its own controversy. And of course, he had to survive another inquiry to do so. With sweltering weather prompting the majority of east coast tracks to cancel their cards, all eyes were on Monmouth Park Saturday. After holding the afternoon's first two contests following a delay, the announcement was made that all non-stakes events would be cancelled and that the carded stakes races would be held later in the evening.

The gate for the day's feature sprung some 2 1/2 hours after its originally scheduled post time and Maximum Security, the
4-5 chalk perhaps best known for being disqualified from first to 17th in the GI Kentucky Derby May 4, broke well and took up a stalking spot three deep. All but GI Preakness S. runner-up Everfast (Take Charge Indy) bunched up through splits of :22.92 and :47.71. King for a Day (Uncle Mo), who bested the favorite in the June 16 Pegasus, was the first to make his move up the fence heading into the home turn, but he was immediately tackled by Maximum Security with 'TDN Rising Star' Mucho Gusto (Mucho Macho Man) soon joining the fray out wide for Haskell record holder Bob Baffert.

King for a Day was the first to blink and seemed to be running out of horse, then dropped back sharply as Maximum Security appeared to make it tight for him along the inside. That left it up to Mucho Gusto to pull off the potential mild upset, but Maximum Security had more to give still and kept on steadily to score by a length. After a quick look by the stewards that stood in stark contrast to the seemingly endless looks at replays before the Derby decision, the stewards made no change.

“When he was doing as well as he was coming up to the race I had every reason to be confident,” said Maximum Security's trainer Jason Servis. “My horse has a lot of heart. He does not mind going head-to-head with any horse.”

This was the first Haskell win for the long-time Monmouth fixture.

“I've been here 40 years so winning the Haskell means a lot. I worked in the jockeys' room [as a valet] for 22 years.”

Servis remained noncommittal in terms of a next start.

Eight-time Haskell winner Bob Baffert said of the race, “That was exciting. I'm glad they didn't disqualify [Maximum Security]. That would have been awful. My horse is improving.”

With the victory, Maximum Security earned an automatic berth into the GI Breeders' Cup Classic.

“I [knew there was] going to be a lot of speed in the race,” said winning rider Luis Saez, who was also aboard Maximum Security in the Derby. “I'm not going to go to the lead and let everybody press me, and I had the best post, I think. I just came out of the break from the gate and waited to see how fast they were going. When I saw that everybody wanted take the lead I just stayed right there. And when he came to the half-a-mile he put me inside in a pretty nice spot, he was traveling good. When I saw [Mucho Gusto], he came outside me, he came close to me and tried to beat me. I just let my horse run and he kept battling with him.”

Dangled in for just $16,000 when he aired by almost 10 lengths at first asking in a Gulfstream sprint back in December, Maximum Security crushed starter/optional claiming foes in his next two before stretching out and dominating the GI Xpressbet Florida Derby going this distance Mar. 30. He veered out heading for home and impacted several runners before seemingly proving best in the GI Kentucky Derby, only to see his number pulled down and a frenzy of opinions–and litigation from his owners–to follow. The strength of his Derby performance had been flattered by subsequent efforts by a number of also-rans, but Maximum Security didn't seem quite like himself after stumbling and getting out-kicked by King for a Day going a sixteenth shorter at five cents on the dollar.

With Maximum Security part of his second crop, GI Breeders' Cup Juvenile winner New Year's Day has had six stakes winners, which include GIII Ben Ali S. winner Bourbon Resolution. After standing at Hill 'n' Dale Farm near Lexington, New Year's Day was exported to stand in Brazil in 2018 and was subsequently sent to Japan. Less well known is Maximum Security's broodmare sire, the A.P. Indy stallion Anasheed, who was runner-up in the 2002 GIII Arlington-Washington Futurity. He had six crops numbering a total of 112 foals and his daughters have been responsible for three black-type winners, including Florida's triple stakes winner Garter and Tie (Brooks 'n Down). Maximum Security's dam, Lil Indy, is a half-sister to three-time Grade I winner Flat Out (Flatter). She and her 2019 filly, a full-sister to Maximum Security, were sent to Korea earlier this year after she sold for $11,000 with the filly in utero at last year's Keeneland November sale. She leaves a yearling colt by Flashback in this country.