Maxfield Settling in Upon Return to Jonabell Farm 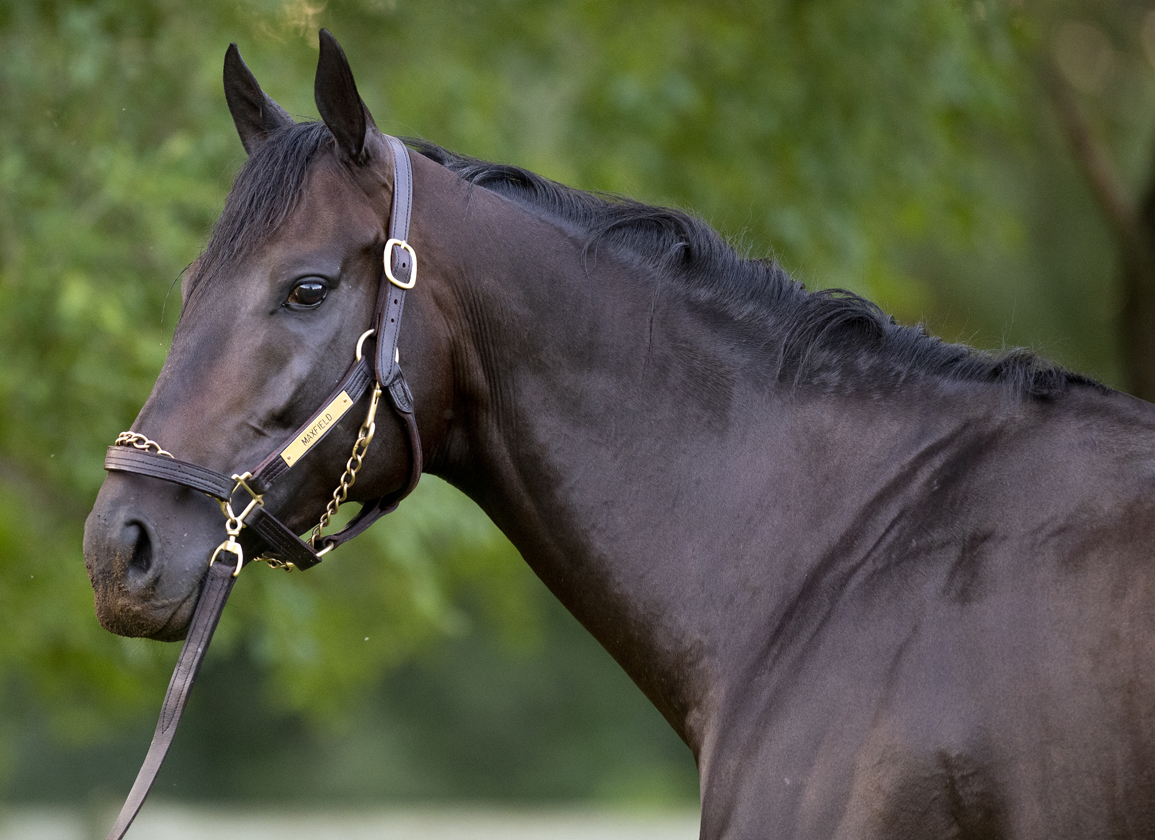 Brendan Walsh was reunited with his first Grade I winner Maxfield this week at Jonabell Farm. | Sarah Andrew

Just a three-mile jaunt from Brendan Walsh's barn at Keeneland, the conditioner's first Grade I winner Maxfield (Street Sense – Velvety, by Bernardini) is settling into his new home at the stud barn of Darley's Jonabell Farm.

Three weeks ago, the Godolphin homebred ended his career on a high note with a final victory in the GI Clark S. at Churchill Downs. Walsh, who had hopped  on a plane shortly after the win to visit his Florida division, had not seen Maxfield since that night. So when he dropped in at Jonabell Farm this week to see his former pupil it was, as he said, like visiting his kid in college.

“We were all very fond of him and we're kind of missing him,” the Irishman admitted. “It's good to be able to come see him and he'll make a great stallion. Hopefully we can look forward to training his babies in the years to come.”

Maxfield had clearly not forgotten his old friend as he accepted Walsh's carrots and pats and looked on quietly as a crowd of breeders gathered.

“He was so talented from day one and he has such a great character,” Walsh said. “He was so calm with everything. With some horses you're concerned about them at the races if they're going to act right, but he just filled you with confidence because he had such a good temperament and there was never a worry about if he was going to put his best foot forward.”

For everyone at Jonabell, Maxfield's return marked a celebratory homecoming.

“To have Maxfield do what he did on the racetrack and then come back to his birthplace to take up residence in the stallion barn, it's unbelievably special,” said Darley's Darren Fox. “It's really what we're trying to achieve here and we couldn't be happier to have a horse of his caliber, pedigree, physique and race record fly the flag forward for us here at Jonabell.”

Maxfield's retirement for 2022 was announced in October this year and the new addition, who will stand for a fee of $40,000, was booked full before he entered the stud barn at the end of November.

“Demand was strong for him from the get-go,” Fox said. “We emailed our clients to let them know when he would be arriving at the farm and before we started showing him, he was essentially full. For a stallion to be full before he does his first stallion show says it all. The wave of interest was incredible and he has certainly amassed a stellar first book of mares.” 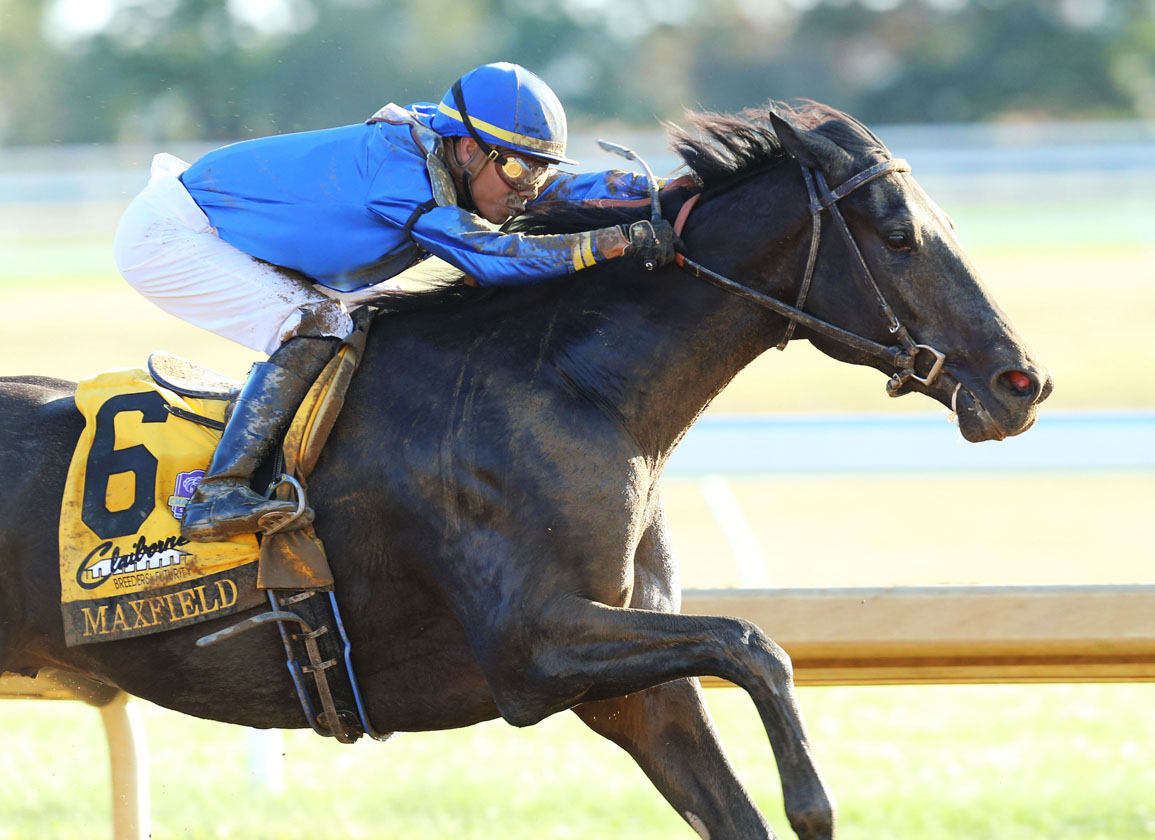 Joining his sire Street Sense on Darley's stud roster, Maxfield is out of the winning Godolphin homebred Velvety, a daughter of red-hot broodmare sire Bernardini, who passed away at Jonabell earlier this year.

“He is absolutely, stunningly gorgeous,” Fox said. “He looks like a Street Sense on first impression with that same size and physique, but he's a smoother, better-looking version of Street Sense. We see shades of Bernardini through his head. For a good-sized horse, he is so light on his feet. He has that jaw-dropping commercial walk that every weanling and yearling purchaser looks for. Then when you add in his pedigree, it's one of the best female families in the stud book.”

Maxfield's second dam MGSW Caress (Storm Cat) was purchased by Sheikh Mohammed's operation for $3.1 million in 2000. The mare is responsible for Grade I winner and sire Sky Mesa (Pulpit) as well as MGSW and GISP Golden Velvet (Seeking the Gold).

Despite a physique that suggested that the colt would excel going two turns, Maxfield was one to watch from the start of his juvenile season.

Breaking his maiden on debut going a mile at Churchill Downs, Maxfield was a dominant winner of his next start in the GI Claiborne Breeders' Futurity.

“The 2-year-old form is almost the cherry on top that you wouldn't expect for a horse of his profile,” Fox said. “His Breeders' Futurity at Keeneland was jaw-dropping. A lot of shrewd people called it the most impressive performance by a 2-year-old that year.”

An ankle chip forced Maxfield to scratch from the GI Breeders' Cup Juvenile, but the colt returned a winner as a sophomore in the GIII Matt Winn S. An injury forced him to the sidelines once more and he skipped a September Kentucky Derby in 2020, but came back to remain undefeated in the Tenacious S. in December and then the GIII Mineshaft S. to begin his 4-year-old campaign.

Although Maxfield's 2020 season was a test in patience for his trainer, Walsh said he never lost faith that his pupil was destined to remain at the top of his game.

“Everyone always says, 'Oh, you had so many highs and lows with him,' but it was never really a low because we always knew he had the talent to come back and we always knew that as he got older, he might get better,” Walsh explained. “He was actually very consistent through his whole career to win a Grade I at two and then he went on to become a fantastic 4-year-old.” 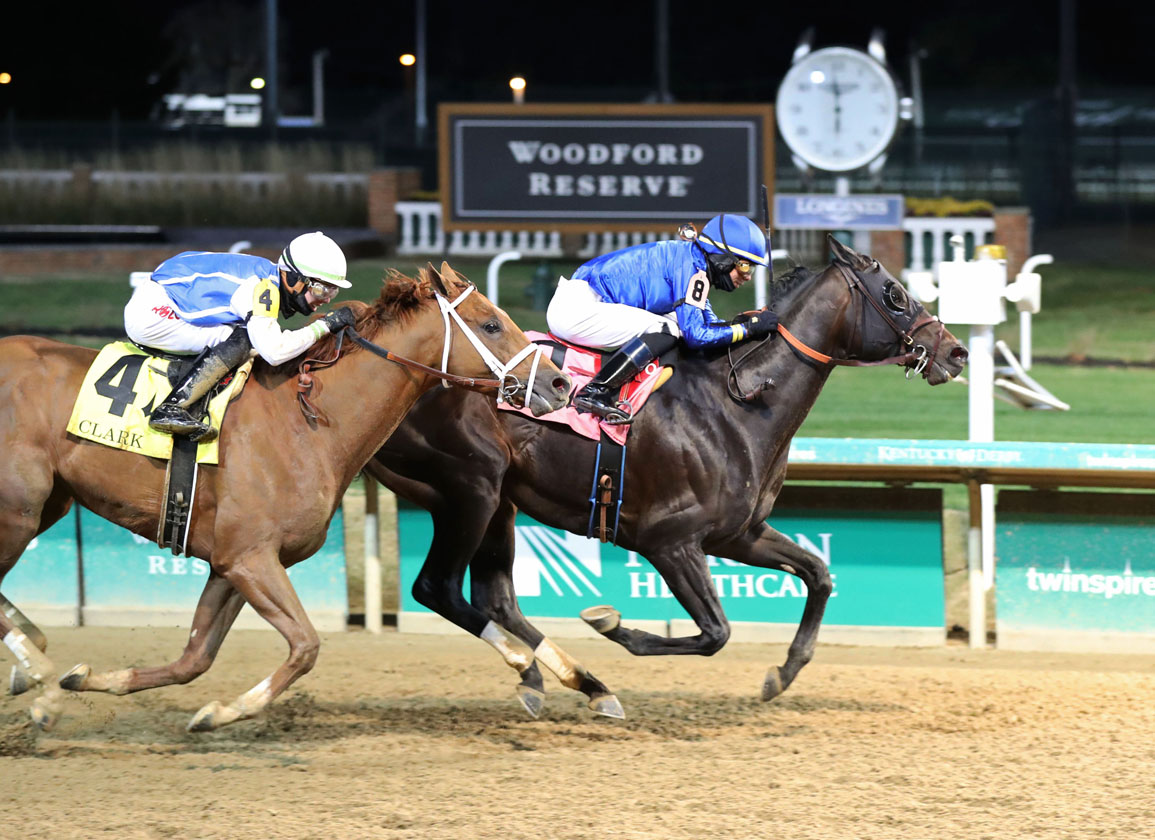 Maxfield wraps up his career in style with a win in the 2021 GI Clark S. | Coady

Maxfield ran in the money in each of his seven starts at four, claiming the GII Alysheba S. and GII Stepehen Foster S. each by over three lengths, then running second in the GI Whitney S. and GI Woodward S. and finally capping off his career by winning the GI Clark S.

“Maxfield is the first horse in history to win the Alysheba, Stephen Foster and the Clark,” Fox said. “There was no doubt that he had an affinity for Churchill. He was in his absolute element, circling the field on more than one occasion and having so much in the tank on a lot of those performances.”

Maxfield retires with earnings of over $2 million and was never off the board, running in nine graded stakes, including five Grade I races, over his three-year career.

Fox said one of his favorite memories of Maxfield's racing career was watching him in the paddock before each race, particularly on busy race days ahead of the GI Whitney at Saratoga and the GII Alysheba on the Kentucky Oaks undercard.

“The class that this horse demonstrated made the hairs on the back of your neck stand by watching him in action,” he said. “I've watched him in some absolutely-mobbed paddocks and he was as cool as could be. He never turned a hair and the confidence he exuded was inspiring to watch. I see a lot of the class coming from his sire and broodmare sire and while obviously he's his own horse, he certainly inherited their composure.”

“It's just that X-factor that you look for,” he continued. “He is such a smart, intelligent and unbelievably-classy horse. Whatever ability this horse passes on to his progeny, if they inherit his class and composure, they'll certainly be able to demonstrate the full extent of their ability in the afternoons.”

To catch up on all TDN features for new stallions for 2022, click here.