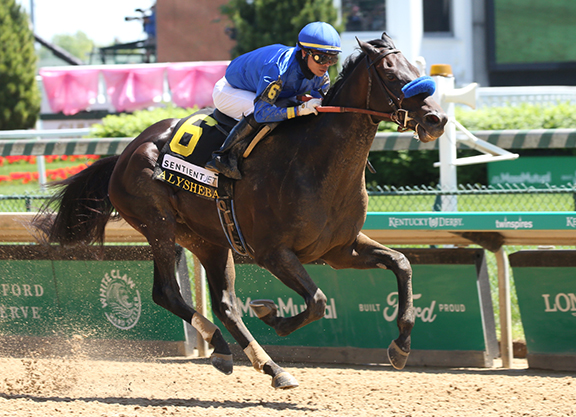 Maxfield bounced back from his first-ever defeat to kick off Derby weekend's graded stakes action as a heavy favorite in Friday's GII Alysheba S. A head-turning winner of the GI Claiborne Breeders' Futurity as a juvenile, the Godolphin homebred was forced to miss the Breeders' Cup, but resurfaced a winner in the track-and-trip GIII Matt Winn S. last May and looked perfectly poised to take advantage of the pushed-back Triple Crown schedule last term. He was soon diagnosed with a condylar fracture, however, and eventually resurfaced to take the Dec. 19 Tenacious S. and Feb. 13 GIII Mineshaft S. at Fair Grounds, leading many to believe he was the best older horse in the country. Favored at 11-10 when attempting to get 10 panels in the Mar. 6 GI Santa Anita H., the Godolphin homebred could only manage third, beaten two lengths, behind a pair of locally based runners.

Away without incident from the outside six post, Maxfield settled in midpack out in the clear under stout restraint behind splits of :23.91 and :47.48. He ranged up ominously entering the home bend, poked a head in front near the quarter pole and edged away from resilient pacesetter Visitant before widening the gap late.

“I was very confident all the way around,” said winning pilot Jose Ortiz, who hadn't been on Maxfield since the Matt Winn. We were right where I wanted to be. When it came time to go, he was there for me. He's one of the nice ones.”

Trainer Brendan Walsh added, “I just told Jose to get him in a nice rhythm, he likes to roll along and get into that cruising speed. He's an adaptable horse, so he's easy to ride under whatever the circumstances. Physically he's a stronger horse, as time's gone on, he's gradually filled out and he's up to his full maturity, which is exciting. He loves this track, and he hasn't done anything wrong. But actually he hasn't done anything wrong at any track where he's run. He's just a very good horse.”

Maxfield's pedigree has Godolphin all over it from top to bottom, sired by Street Sense–a son of the operation's Street Cry (Ire)–and out of fellow Sheikh Mohammed homebred Velvety, a daughter of Street Sense's barnmate Bernardini. He is one of 11 Grade I winners, 35 graded winners and 78 black-type winners by Street Sense. Maxfield is also one of 11 Grade I victors, 28 graded scorers and 49 black-type winners out of a daughter of Bernardini, whose status as a top broodmare sire seems to increase each week.

Godolphin went to $3.1 million at the 2000 KEENOV sale to acquire Maxfield's second dam, MGSW Caress (Storm Cat), in foal to Coronado's Quest. Caress is responsible for Grade I-winning sire Sky Mesa (Pulpit) and MGSW Golden Velvet (Seeking the Gold), who is the dam of graded winners Lucullan (Hard Spun) and Innovative Idea (Bernardini). Maxfield was only Velvety's second foal and she has since produced the 3-year-old colt Dubai Vision (Medaglia d'Oro) and a juvenile filly by Medaglia d'Oro. Her 2020 colt by Street Sense died and she was bred back to Uncle Mo for 2021. This is also the family of graded winners Good Samaritan (Harlan's Holiday), Brave Nation (Pioneerof the Nile), Country Cat (Storm Cat), Della Francesca (Danzig) and Bernstein (Storm Cat).