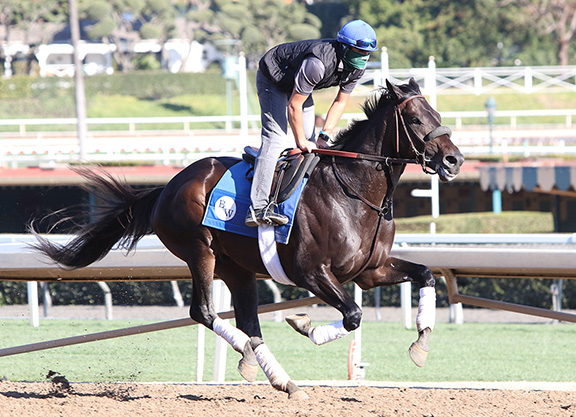 The undefeated Maxfield (Street Sense) looks to put on yet another show for racing fans Saturday as he invades the West Coast for the first time in the GI Santa Anita H. A debut winner at Churchill in September, the Godolphin homebred romped in Keenland's GI Claiborne Breeders' Futurity S. a month later. The early favorite for the GI Breeders' Cup Juvenile, he was scratched after spiking a fever just days before the race. Resurfacing May 23 at Churchill, the bay captured the GIII Matt Winn S., but was knocked off the GI Kentucky Derby trail after suffering a condylar fracture in a workout a month later. Making another successful return in the Tenacious S. at the Fair Grounds Dec. 19, Maxfield turned in another impressive performance when taking that venue's GIII Mineshaft S. Feb. 13.

“He's just a stronger horse now,” trainer Brendan Walsh said. “I think as a two-year-old he was a bit immature, maybe not that strong, and that's why he wasn't getting away from the gate super-fast, but that didn't seem to have a negative affect upon him. That said, his last three starts he's been a lot closer to the pace.”

Express Train (Union Rags) looks to score his first win at the highest level here. Capturing a Del Mar optional claimer in August, he was second next out there a month later. Eighth when trying turf in the GII Twilight Derby Oct. 18, the bay completed the exacta behind Charlatan (Speightstown) in the GI Malibu S. Dec. 26. The $500,000 KEESEP buy rebounded with a decisive score in this venue's GII San Pasqual S.

Independence Hall (Constitution)–a dominant winner of the 2019 GIII Nashua S.– was transferred from Mike Trombetta to Mike McCarthy last spring. Rallying to victory in an optional claimer at Del Mar in his first start for McCarthy at Del Mar Nov. 8, the dark bay found the waters a bit too deep when fifth in the Malibu and was a respectable third behind Knicks Go (Paynter) last time in Gulfstream's GI Pegasus World Cup Invitational S. Jan. 23.