Maxfield Looks to Bounce Back in Alysheba 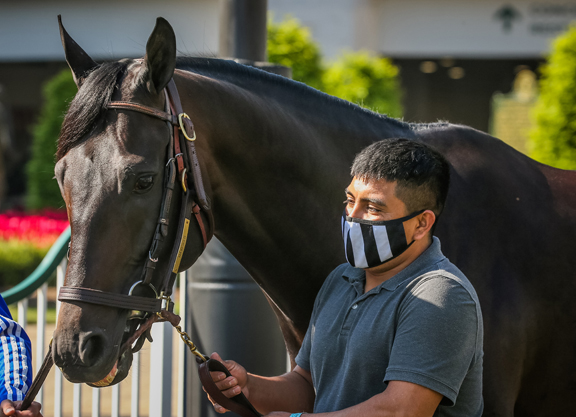 Maxfield schooling in the paddock earlier this week | Horsephotos

Godolphin homebred Maxfield (Street Sense) will look to bounce back from his first-ever defeat as the Churchill Downs graded action kicks off Friday with the GII Alysheba S. The 2019 GI Claiborne Breeders' Futurity hero was forced to miss that year's Breeders' Cup due to injury, and resurfaced a good-looking winner of the track-and-trip GIII Matt Winn S. some 11 months ago, only to be knocked off an elongated Triple Crown trail with a condylar fracture. He defeated Sonneman (Curlin) handily in both the Dec. 19 Tenacious S. and Feb. 13 GIII Mineshaft S., but settled for third as the favorite while testing 10 panels in the GI Santa Anita H. Mar. 6. Maxfield did pair up his career-best 99 Beyer Speed Figure in the Big 'Cap, and anything close to that will win this. Chess Chief (Into Mischief), who was third in the Mineshaft, annexed the GII New Orleans Classic S. last time Mar. 20. Fourth, beaten just 3/4 of a length, was 2019 GI Santa Anita Derby winner and 'TDN Rising Star' Roadster (Quality Road), who is back in the Bob Baffert barn after being switched to Mike Stidham for his last outing.