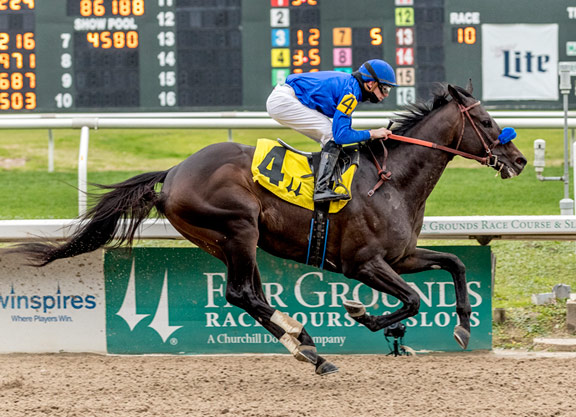 Undefeated and widely considered among the top horses in training, Maxfield (Street Sense) will make his next start in Saturday's GI Santa Anita H.

The news was first reported by TVG's Christina Blacker.

“He'll head out there tomorrow,” trainer Brendan Walsh said. “We're looking forward to it. The race has been on our radar for a while. At 1 1/4 miles, it's a nice race for him and the timing is good. It gives us a chance to win a Grade I. The race makes sense.”

With Maxfield being owned by Godolphin, the Mar. 27 G1 Dubai World Cup seemed like a logical spot for Maxfield, but Walsh said the connections wanted to keep him closer to home.

“We kind of wanted to keep the horse in this country,” he said. “He's still a lightly enough raced horse. We wanted to keep him here, try to make progress and get a solid year's racing out of him. We want to get a good body of racing into the horse.”

Maxfield showed his talent at the outset, winning a maiden race before capturing te GI Claiborne Breeders' Futurity as a 2-year-old. But he missed out on the 2019 GI Breeders' Cup Juvenile, the 2020 Triple Crown races and the 2020 GI Breeders' Cup Classic due to some minor setbacks. In December, he returned to win the Tenacious S. at the Fair Grounds and then the GIII Mineshaft S. It was the first time in his career he was able to run in back-to-back races without a long break in between.

“It's been great,” Walsh said. “We always thought that the horse was super talented. That's been there for everyone to see. We came to New Orleans this winter and I thought it was great we were able to get those couple of runs into him. No disrespect to the horses he ran against down there, but we didn't have to face the very top horses in the country. That was a super important stepping stone for him for us to go ahead and take a step like he is going to take next Saturday. This will be a good test for him and a good experience for him to have to travel out to California.”

Walsh also provided an update on another star in his stable, Prevalence (Medaglia d'Oro). After he broke his maiden by 8 1/2 lengths, he was considered a possible starter in the GII Fasig-Tipton Fountain of Youth S., but had to miss the race after coming down with a temperature. He returned to the work tab Saturday, breezing a half-mile in :48.40 at Palm Meadows.

“It was a nice work and we were really happy with him,” the trainer said. “We'll probably try to find an allowance race at Gulfstream for him in the next book and go from there. We missed working him last week, so that eliminated any chance we might have had in running him in the Fountain of Youth. At the end of the day, he's only run one time, so it would have been a big ask to go against those horses. He's a lovely horse and I think he is progressing. He's going the right way.”