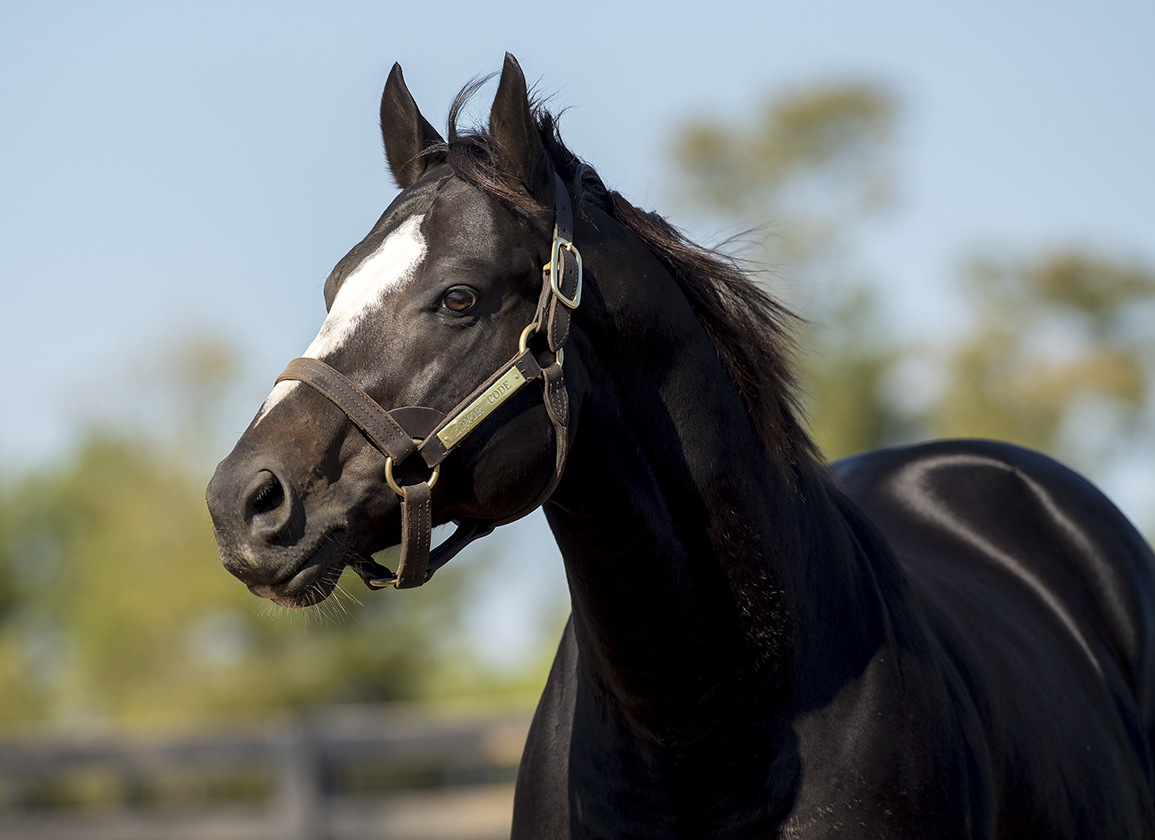 When a horse carries a name like this, there can be no evasion or equivocation. With due honesty, then, let us admit that Honor Code is not yet converting his transparent eligibility as a stallion–apparently so watertight in pedigree, physique and performance–in quite the fashion that seemed likely when he produced the luminous Honor A.P. from his very first crop.

Not yet. Small, agonizingly flexible words, in the context of a suffocatingly impatient marketplace. By any rational measure, it should still feel like early days in Honor Code's stud career. After all, his forte was always going to be two-turn horses that progress with maturity. And it was only this time last year that one such, Honor A.P., was basking in a decisive defeat of Authentic (Into Mischief) in the GI Santa Anita Derby. Luck would subsequently turn against this vital flagship, thereafter confined to two starts that did inadequate justice to his ability before being forced into retirement–and, indeed, into competition with his sire at Lane's End. But let's not forget that Honor A.P. was the only colt ever to beat the eventual Horse of the Year and, moreover, appeared to do so entirely on merit.

Even so, with only his second crop of sophomores barely halfway through their campaign, Honor Code somehow finds himself at something of a crossroads. For the success of Max Player in the GII Suburban S. last Saturday shone a fairly unsparing light on the fact that for now he remains Honor Code's only other graded stakes winner, besides Honor A.P., with just two other black-type scorers to back them up.

As another graduate of his first crop, of course, the fresh impetus of Max Player may yet be emulated by others responsible for this fitful record to date, which has seen Honor Code's fee halved to $20,000 from an opening $40,000. (A pretty standard slide, of course, as the freshman luster fades.) True, we all need to see Max Player do it again: the track was sloppy, and the runner-up perhaps a little rusty. But he certainly looked like a horse who, having meanwhile joined one of the powerful barns in the land, is belatedly renewing the promise of his GIII Withers S. emergence last year.

Regardless, long experience permits the people behind Honor Code to place in heartening context the teething problems of so many sires who then regrouped to become important contributors to the breed.

“You know, people rush to judgement so early,” says Bill Farish of Lane's End. “And we've seen it over and over again with our stallions: sometimes they just take a little while to get going. Kingmambo's first 2-year-olds just didn't light it up for people, and then he came on like crazy. We had quite a lot of interest in him [at that time] from abroad, but luckily Dad was pretty firm in his belief. And thank goodness. I remember breeding to him I think at $18,000, after he had started at $45,000. And there was a shareholder market significantly below that. What an opportunity that was!”

“We went through a similar experience with Smart Strike,” Farish continues. “And Curlin was another, just the same. It's amazing how everyone forgets now that Curlin went through a tough stretch before he came flying out. In the meantime, unfortunately, he had found a new home. But yes, he went through that same kind of patch. So we're still very optimistic that Honor Code can still go on the same kind of course.”

Having launched a series of new stallions over recent seasons, the farm routinely faces challenging decisions on the distribution of support among the broodmare band. But knowing that Honor Code was hardly likely to produce a bunch of Keeneland sprint maiden winners, he was maintained at full subscription (at least by the wisely temperate standards of this farm) through his first four years at stud. This third group of juveniles, then, represents a book of 154. And, in scanning the horizon for reinforcements, the Lane's End team can already make out the silhouettes of the cavalry.

The retention of several Honor Code yearlings for their racing division reflected a concern that they might be undervalued in a market so shaken by the pandemic. And Shug McGaughey, whose Hall of Fame career includes supervision of Honor Code's own track career, has encouraged them that this strategy will pay off.

“We've got an exciting group of 2-year-olds,” Farish says with enthusiasm. “There's a colt named Informal who's out of the Epsom Oaks winner Casual Look (Red Ransom). He should run in the first grass race up at Saratoga: obviously that makes sense with that female family. Another one who's quite close is Irish Sea, who's out of [multiple graded stakes winner] Irish Jasper (First Defence). I only mention those because they're just a couple of weeks off running, but we have three others that we're very high on. So we'll see.”

Farish acknowledges that some stallions won't make the grade even when, by all the consensus that governs breeding selection, it seems like they just can't miss. But the immediate advent of Honor A.P. really did appear to corroborate the sense of destiny vested in Honor Code, one of 36 named foals in the final crop of A.P. Indy–the breed-shaping farm icon, who finally passed on last year at the venerable age of 31.

A Saratoga debut winner who missed a Grade I by a neck on his second juvenile start, Honor Code was sidelined from the Triple Crown trail by injury but matured into a tremendously charismatic dasher, pouncing from way off the pace in races like the GI Met Mile and, most memorably, the GI Whitney S.

That epic race, where Honor Code nailed Liam's Map on the line, had an intriguing sequel when the first three (Tonalist having also finished well for third) all ended up at Lane's End. And, since renewing their rivalry, they have been somewhat reprising their Whitney performances.

Liam's Map made a similarly explosive start to his stud career, with two Grade I winners among his opening salvo of juveniles immediately elevating his fee from $20,000 to $35,000. Tonalist, in contrast, was away relatively slowly and duly absorbed a series of fee cuts, standing this year at just $12,500. But he has been quietly working his way forwards through this competitive intake (headed by American Pharoah and Constitution): his black-type winners and performers now tally seven and 17, against nine and 16 for Liam's Map, and he recently registered a breakout Grade I success through Country Grammer. Indeed, Tonalist's diligent progress (currently fifth in the third-crop table) makes him look exceptional value–and he could yet become another slow-burning success along the lines of those cited by Farish.

That must also be the hope for Honor Code. This is a notoriously ruthless business and every farm, at some point, must decide when to yield to the prejudices even of a market as foolishly capricious as this one. But Farish is keeping the faith, albeit he acknowledges both that Honor Code needs to retrieve commercial attention and also that he faces an additional challenge in the rivalry of his own son Honor A.P.–introduced as a freshman this spring at a bargain $15,000.

It's a situation that presents difficulties to father and son alike, but they also share a glossy physical allure, showcased in their racing days by the earnest head carriage and raking stride trademarked by A.P. Indy himself.

“People are always a little hesitant to breed to a stallion whose own sire is still young, and hasn't proven himself as a sire of sires,” Farish accepts. “But people that come out and look at them generally end up breeding to them, because they're both very flashy, eye-catching types.”

So while Honor Code's book this time round was evidently down somewhat, from 138 mares in his fourth book and 85 mares in his fifth, he remains absolutely entitled to consideration–not least, in view of that seamless pedigree, by breeders disposed to retain a filly. Perhaps there isn't sufficient commercial oxygen in the modern market for all three of those Whitney protagonists to find a sustainable niche in the Bluegrass. But it's far from clear that the current balance of power, between them, will prove a lasting one. Remember that even their oldest stock has not yet arrived at the point in their careers that they themselves reached that day.

“Tonalist had a decent sort of book this year,” Farish reflects. “I think he's really in the fight, too, along with Honor Code. His race record was phenomenal. People forget that he won the [GIII] Westchester and the [GI] Cigar, and was really a good miler as much as anything. They're not all going to make the grade but they each have the chance to ride it out and come out the other side.

“But yes, while things like Max Player's win are great, you need more than that; you've got to have some new horses, some 2-year-olds coming along. And we're more than hopeful that we do. Sometimes you just need quite a bit of patience. It's interesting how we seem to have more stallions that need a bit of time, where other farms tend to have a bunch of hot 2-year-olds and then it all goes quiet. Ours seem to go a different route. But so long as they show up at some point, I guess it doesn't matter. And there are so many things to like about Honor Code that it's hard to imagine he's not going to come on through.”