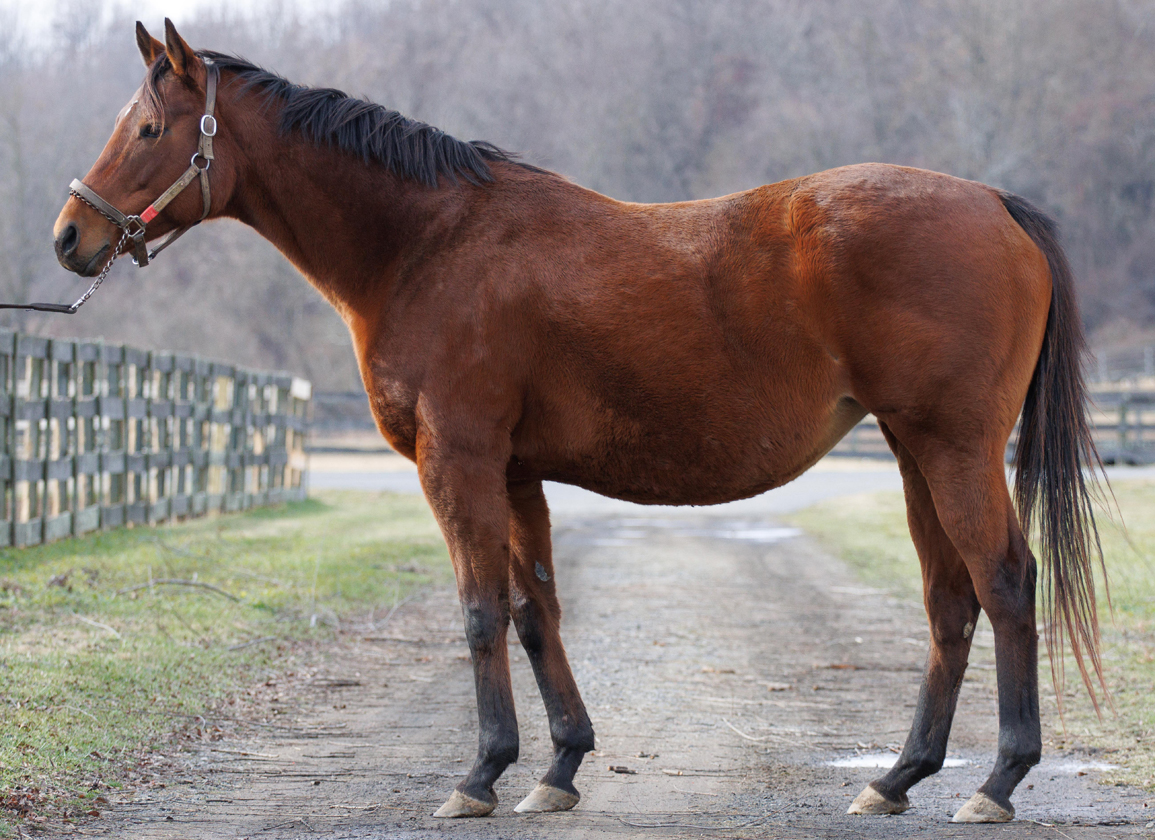 With the 2022 breeding season right around the corner, we will feature a series of breeders' mating plans over the coming weeks. Today we have George Adams of Housatonic Bloodstock, who serves as the Director of Stallions and Breeding for Wasabi Ventures Stables.

“With a relatively young group of mares, ideally we'd like to send them to a proven stallion at least once or twice in their first few years, just to get a better handle on their ability as producers,” said Adams. “At a lower stud fee price point that's not always easy to do, especially when you're trying to breed a foal with commercial appeal. But we think we're striking a pretty good balance overall.”

WILD FOR LOVE (m, 12, Not For Love–Sticky, by Concern), to be bred to Tacitus

Wasabi's most proven broodmare is Wild for Love, and she's booked to a first-year stallion we're really excited about in Tacitus. Wild for Love herself brought good money as a 2-year-old and was a pretty solid racehorse. We obtained her privately a couple of years ago, while she was carrying the foal that became the 2021 stakes-winning 2-year-old Local Motive. He's by a son of Tapit, and Not For Love mares have had success with A.P. Indy-line stallions before (see California Chrome), so Tacitus was an easy choice. He's got an outstanding pedigree and a great physical, and he might not have won a Grade I, but he was a top-class racehorse. The fact that he's a Tapit with Storm Cat on his bottom side means this foal will be similarly bred to Local Motive.

YESSHEWILL (m, 10, Giant's Causeway–Wilshewed, by Carson City), to be bred to Rock Your World

Yesshewill was just purchased by Wasabi at Keeneland in November. Unfortunately, she lost the Accelerate foal she was carrying at the time, but she's still a half-sister to a Grade I winner, a Grade II winner, a Grade III winner and another stakes winner, plus two stakes producers.

Having had a handful of foals already, she's another mare that will visit a first-year stallion in 2022 and is booked to Rock Your World. David Ingordo is one of the best judges of young horses out there, and this colt had all the brilliance and versatility you'd want in a sire. His pedigree is also top drawer, and shares some similarities with Gun Runner, who has had his biggest successes so far with mares carrying more Storm Cat blood. We're going to try to duplicate that with Rock Your World by sending him this Giant's Causeway mare, and hope it works as well for him.

HURRYUPANDCOMEBACK (m, 7, Mizzen Mast–Shared Hope, by Gone West), to be bred to Modernist

Hurryupandcomeback produced a $275,000 Saratoga yearling by Army Mule as her first foal, and last year got a shot with a stallion about as proven as you can get in More Than Ready. She's going back to another first-year sire in 2022, in Modernist.

A gorgeous horse by a stallion who has already proven his worth as a sire of sires, Modernist will suit this mare physically as she needs a little bit of leg and substance, which he offers. And her family has already had success with Uncle Mo, as he's the sire of Donna Veloce who appears under Hurryupandcomeback's second dam.

WOWWHATABRAT (m, 10, Louis Quatorze–Kim the Brat, by Smart Strike), to be bred to Jimmy Creed

Wowwhatabrat was a hard-knocking, versatile runner and is a three-quarter sister to a really good colt named Second of June. Her dam is a half to the dam of Any Given Saturday, who is by Distorted Humor, and we have been on record repeatedly as being huge fans of Jimmy Creed (obviously by Distorted Humor), who offers incredible value and is a perfect horse to start off a young mare with given his stats.

So this is a mating which we really love. Unfortunately Wowwhatabrat lost the foal she was carrying last year by Jimmy Creed, but she'll head right back to him this spring and we'll hope for better luck.

BUFF'S IN LOVE (m, 7, Buffum–Who's in Love, by Not For Love), to be bred to Alternation

Buff's in Love was a stakes-placed 2-year-old by a sneaky-good Maryland stallion in Buffum, who died just as he was starting to prove his worth. This will be Buff's in Love's first mating, and she's going to be bred to a proven Grade I sire in Alternation. Buffum is a son of Bernardini, and Alternation's big horse, Serengeti Empress, is out of a Bernardini mare. This year is also when Alternation will have a big crop of 2-year-olds reach the races that was conceived after Serengeti Empress's success, so we think he could be a really smart value play this spring.

WEEKEND MADNESS (m, 6, Include–Weekend Connection, by Pulpit), to be bred to Goldencents

Weekend Madness was a big-money 2-year-old by Include, who is a stallion that we really love as a broodmare sire, and her 3-year-old brother Kavod is on the Derby Trail at Oaklawn this winter. She's going to be bred back to Goldencents this spring. He gets nothing but runners, and Weekend Madness is a half to a couple of stakes horses from the Storm Cat sire line. She's also a big, imposing mare with plenty of leg and substance, which should really suit Goldencents.

SEVILLE'S PRINCESS (m, 6, Seville {Ger}–Rap and Dance, by Pleasant Tap), to be bred to Connect

Seville's Princess also has a close relative on the Derby trail–she's a half to the dam of Grade I winner Rattle N Roll, and as such made perfect sense to send to Connect (sire of Rattle N Roll) this spring.

Connect is off to a very strong start at stud, and she's a young mare who could use a shot with a proven horse. He's also got the bone and substance to beef up her foal, so it's a good match all around.