Home » Archive » Shared News » Mario, What Were You Thinking?

Mario, What Were You Thinking? 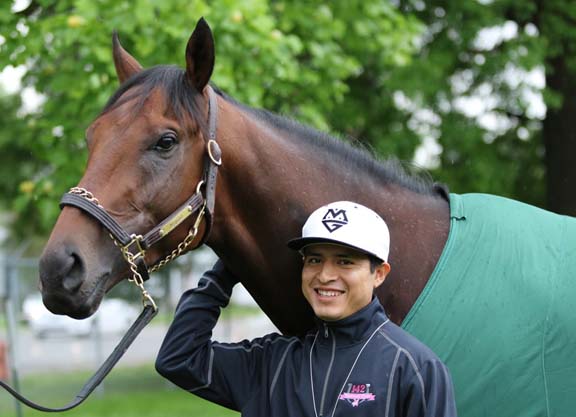 Did Mario Gutierrez have to catch a plane or something?

The young jockey, who had done so well aboard Nyquist (Uncle Mo) throughout the horse's career and in the

GI Kentucky Derby, rode a bad race in the GI Xpressbet.com Preakness S. at rainy Pimlico Saturday. Yes, Exaggerator (Curlin) deserves all the credit in the world for finally defeating Nyquist, but what would the outcome have been if Gutierrez didn't ride the race like it was the All-American Futurity? The opening quarter-mile of :22 1/5 was the fastest in the Preakness since at least 1909, the first year fractional times were included in the charts.

There was indeed plenty of speed in the race, Nyquist included. Uncle Lino (Uncle Mo) liked to be up front early and so did Awesome Speed (Awesome Again). Though drawing more toward the outside, Collected (City Zip), Laoban (Uncle Mo) and Abiding Star (Uncle Mo) were still three more horses that were usually near the pace. But Nyquist gave no indications that he was a had-to-have-the-lead type. He rated comfortably off 'TDN Rising Star' Danzing Candy (Twirling Candy) in the Kentucky Derby and closed from eighth to win the GI Breeders' Cup Juvenile after he got banged around at the start.

Surely, Gutierrez would understand there was no need to get engaged in a speed duel with a bunch of hopeless longshots. Or so one would think.

With Uncle Lino drawing to his inside and Awesome Speed to his outside, Gutierrez could have easily let those two go and sat third or, maybe, fourth or fifth. Instead, he pushed his horse hard as the gate doors opened. Six or seven strides into the race, it looked like Gutierrez tried to take his foot off the accelerator, but he had already managed to put Nyquist into a treacherous situation as the riders of both Uncle Lino and Awesome Speed were also committed to the front. With a horse inside of him and outside of him going hellbent for the lead there was no way to get Nyquist to relax. What really hurt Nyquist was not so much Uncle Lino, it was Awesome Speed. Had his jockey, Jevian (Holy) Toledo, not also been in such a hurry, Gutierrez would have had the option of letting Uncle Lino go and sitting a comfortable second. Instead, Nyquist was caught in an intense battle with a 34-1 shot and a 51-1 shot through a blistering opening quarter-mile.

“The pace was toxic,” analyst Jerry Bailey said on the NBC telecast.

It's likely that Gutierrez was riding to instructions as trainer Doug O'Neill is one that likes to see his horses on the lead. If that's the case, O'Neill has to share the blame. Still, Gutierrez needed to make some adjustments and didn't do it.

Gutierrez and Fernando Perez, the rider of Uncle Lino, managed to slow things down some as the half went in :46 2/5, but it was too late. Nyquist was never given the chance to relax and Gutierrez only added to his problems by keeping his horse in the four path on the first turn and the three path on the second turn.

It's worth noting that American Pharoah (Pioneerof the Nile) also went fast early in the Preakness over a wet track. His early fractions were :22 4/5 and :46 2/5, but his situation was an entirely different one as he was loose on the lead, facing no pressure.

Even after everything Nyquist was put through, he had plenty of fight left in him in the stretch and was giving everything he had to fight back after Exaggerator passed him.

Meanwhile, aboard Exaggerator, Kent Desormeaux rode as good a race as you will ever see, not exactly a surprise since he owned Pimlico for so many years. Right out of the gate he guided his colt to the inside, sat well behind the insane pace, timed his move perfectly, again saved every inch of ground on the second turn and then swung out for the drive. At the top of the stretch, Nyquist still had the lead, but he was toast. He couldn't even hold on for second.

“I had a dream trip,” Desormeaux said.

The 2016 Preakness also served as a reminder of American Pharoah's greatness and how remarkable his accomplishment was last year. Nyquist went into the Preakness looking like a horse that almost couldn't lose the Triple Crown, but he did. Only the greatest of the great pass the test and that's the category Pharoah belongs in.

So the score is now Nyquist four, Exaggerator one. Nyquist is the better horse, and nothing that happened yesterday at Pimlico changed that one bit.