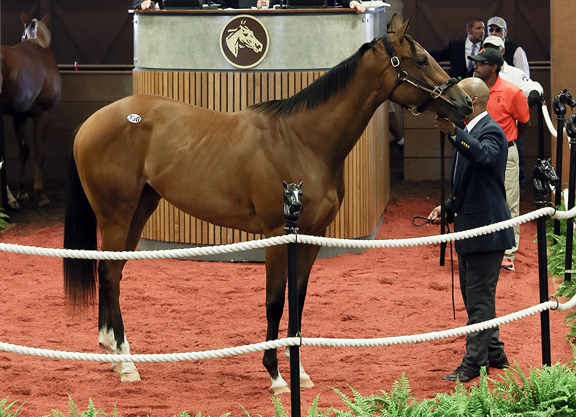 Wayne Catalano unveils a nicely bred colt for Gary and Mary West in FAST CASH (Malibu Moon). The $300,000 KEESEP buy is out of Canadian champion Hillaby (Distorted Humor), who was purchased by Stonestreet Stables for $500,000 at the 2014 Fasig-Tipton July HORA Sale, a few months prior to winning her Grade II and Sovereign Award. She is a daughter of Sealy Hill (Point Given), winner of three Sovereign Awards herself, including Canadian Horse of the Year. Sealy Hill is also the dam of MGISW Cambier Parc (Medaglia d'Oro) and graded winners Belle Hill (Sky Mesa) and Gale Force (Giant's Causeway). Godolphin and Brad Cox are also represented by a firster with Canadian ties in Underscore (Uncle Mo), a $400,000 FTSAUG buy and daughter of Grade III victress Unspurned (Lemon Drop Kid). TJCIS PPs

Michael Lund Petersen's GAMINE (Into Mischief), who topped the Fasig-Tipton Midlantic 2-year-old Sale at $1.8-million, makes her career bow against just three foes here for Bob Baffert. Purchased by Brad Grady's Grand Oaks for $220,000 at KEESEP, the bay blossomed into a seven-figure juvenile after breezing in :10 flat for Bobby Dodd in Timonium. Gamine is out of SP Peggy Jane (Kafwain) and hails from the family of Canadian champion Dynamic Sky (Sky Mesa). TJCIS PPs