Maracuja a Standout for Beach Haven 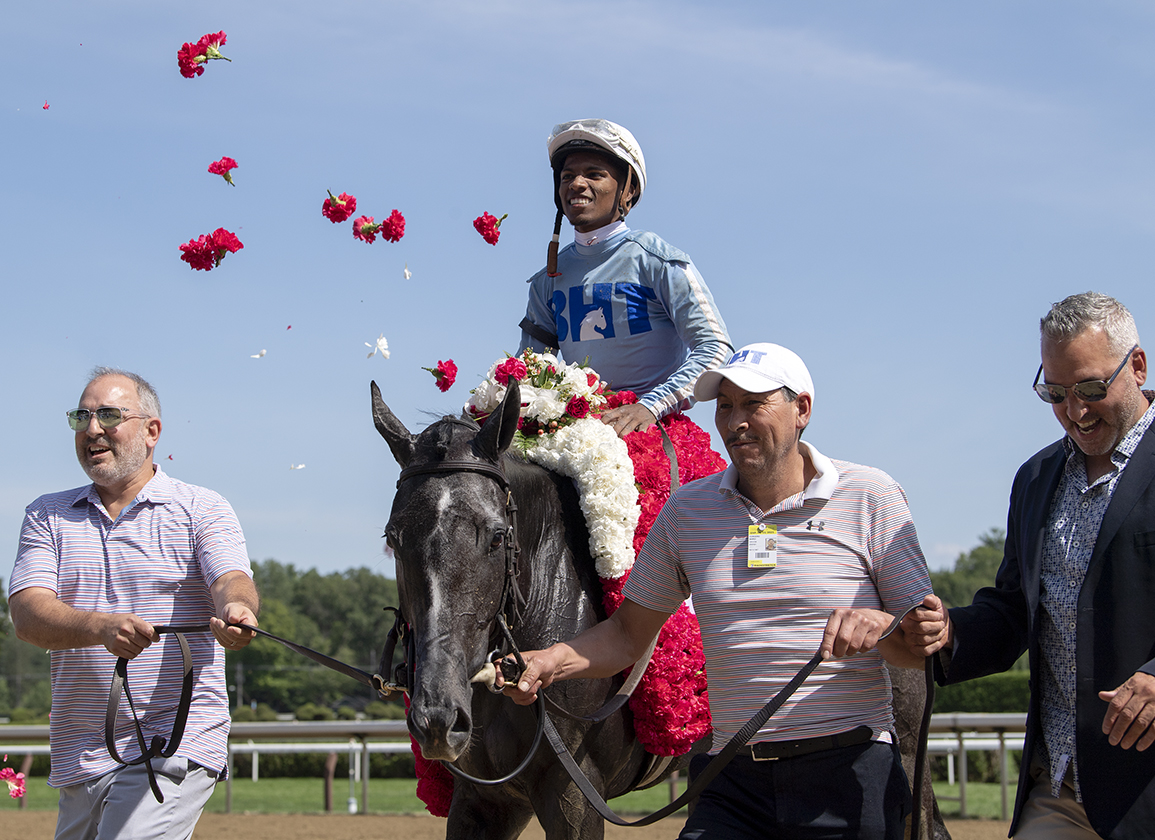 SARATOGA SPRINGS, NY-Even if she had not pulled off the biggest upset of the still-young Saratoga season Saturday afternoon, Maracuja (Honor Code) would have received a major dose of love from her owners Sunday morning.

The gentle gray is, after all, Beach Haven Thoroughbreds's only horse.

While her status in the stable didn't change, Maracuja's victory by a head over Malathaat (Curlin) in the GI Coaching Club American Oaks no doubt raised her stature in the 3-year-old filly division. She isn't likely to be the longest shot in the field in the GI Alabama S., as she was at 14-1 in the four-horse CCA Oaks.

Beach Haven's managing partner John Sakkos, his wife Tracy and two of their friends stopped at trainer Rob Atras's barn to hug and pet the stable's first graded stakes winner. Tracy had to whisper her words of praise after losing her voice screaming for Maracuja during her run through the stretch.

“When we woke up this morning my wife and I we were still kind of pinching ourselves,” John Sakkos said. “Yesterday was a total high. What she accomplished and who she beat, the processing is there.”

Sakkos was a founding partner of the stable with his friend Ara Aprahamian in 2018 and said he still considers himself a rookie in the business. The Sakkoses live in Tompkins Cove, N.Y. a Rockland County town near New York City.

Beach Haven, named after the New Jersey coastal community, has had a fair amount of success with the four horses it has campaigned. Uncle Benny (Declaration of War) finished second to Line of Duty (Ire) (Galileo {Ire}) in the 2018 GI Breeders' Cup Juvenile Turf and earned a total of $516,738 with six wins from 12 career starts. Beach Haven's Sassy Agnes (Central Banker) and Newly Minted (Central Banker) won a total of seven restricted stakes for New York-breds.

Aprahamian spotted Maracuja at the 2019 Fasig-Tipton Satatoga Select Sale and Beach Haven acquired her for $200,000. She broke her maiden on her third try Feb. 21 and followed that success with a second in the GIII Gazelle S. Apr. 3. Twenty seven days later she finished seventh in the GI Kentucky Oaks, 7 1/2 lengths behind Malathaat.

Sakkos said he was feeling optimistic that Maracuja would run well against Malathaat, who had won all five of her races and went off at 1-5 in the small field.

“She's been off for a while after the Oaks, so I was just feeling really good about it,” he said with a chuckle. “You hope that she's going to win, but you didn't want to jinx it. I've gotten a little superstitious in this space right now. I just had a good feeling. And my wife's big into numbers and all these numbers are coming up.”

Sakkos noted that 11 is his wife's number.

“We drove into Saratoga at 11:11, and then we had 22 people for our reservation. It's kind of actually getting to be very superstitious, which is kind of fun,” he said.

Maracuja pressed Malathaat early in the 1 1/8-miles race, but dropped back a few lengths to last under jockey Ricardo Santana, Jr. on the backstretch when Clairiere (Curlin) moved up to make her challenge. On the second turn, Santana asked Maracuja to re-engage the leaders and she moved back into contention at the quarter pole. Racing about four wide, she dueled with Malathaat through the final furlong and prevailed.

Sakkos knew that Maracuja was going to pick up some purse money in a four-horse field. He said his expectations grew as the race unfolded.

“When she came out in the stretch, I think my heart kind of just stopped when we were watching it,” he said. “When she came through the stretch and all of a sudden he started moving her a little bit more. Yeah.”

Maracuja has three owners in the Beach Haven partnership. Sakkos said the COVID-19 pandemic made it difficult to solicit other investors.

“We just went low profile, just went to manage her,” he said. “We've been very blessed with her, for sure.”