Many Chances in Ballerina 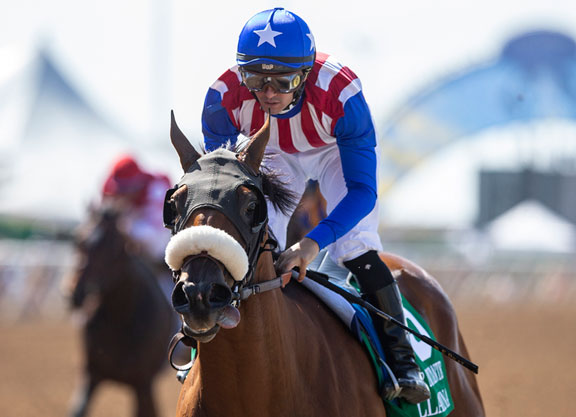 A well-matched field of seven fillies and mares coming from different directions in Saturday’s GI Ballerina S. at Saratoga, the first of three top-level events on the GI Runhappy Travers day card at the spectator-less Spa and a “Win and You’re In” event for the GI Breeders’ Cup F/M Sprint.

Made the lukewarm favorite on the morning line is Kaleem Shah’s Bellafina (Quality Road). A three-time Grade I winner in her first eight career starts, the $800,000 Fasig-Tipton Gulfstream buy was a dull fifth as the favorite in the GI Kentucky Oaks and third when again favored in the GI Longines Test S. here last summer. Burned up on a fast pace and fading to fourth in the GI Cotillion S., she bounced back with a career high when dueling dual champion Covfefe (Into Mischief) to the wire in the F/M Sprint before settling for second and was runner-up again after setting a blistering tempo in the GI La Brea S. A troubled fourth in the Carousel S. Apr. 25 at Oaklawn, she got her first win in over a year when scoring in the GIII Desert Stormer S., but was beaten at 1-2 when second in the GII Great Lady M S. last out July 4 at Los Alamitos.

Last year’s Kentucky Oaks heroine Serengeti Empress (Alternation) and last year’s Ballerina victress Come Dancing (Malibu Moon) both also need a return to top form as the second and third choices, respectively. Serengeti Empress, runner-up in the GI Acorn S. and the Test after her Oaks triumph, retreated to sixth in the Cotillion before finishing a solid third as the pacesetter in the GI Longines Breeders’ Cup Distaff. Second at odds-on in the GIII Houston Ladies Classic S., she rebounded with a dominant 6 1/4-length score in the GII Azeri S., but was 11th after chasing the speed in the GI Apple Blossom H. and offered little resistance to champion Midnight Bisou (Midnight Bisou) when fourth in the GII Fleur de Lis S. June 27 at Churchill.

Come Dancing, widely considered the best older filly and mare sprinter last year after going four-for-five to start her campaign, a stretch that included a 3 1/2-length score in the Ballerina, made no impact when sixth at 2-1 in the Breeders’ Cup Filly & Mare Sprint. Backing up to 12th in the Apple Blossom, she couldn’t get to re-opposing longshot Victim of Love (Speightstown) as an odds-on runner-up in the GIII Vagrancy H. June 27 at Belmont. The Blue Devil Racing Stable homebred will attempt to become just the second back-to-back winner of the Ballerina, following Shine Again (Wild Again), who scored in the 2001 and 2002 renewals.

Rounding out the field are speedsters Cookie Dough (Brethren) and Letruska (Super Saver) and late-running Pink Sands (Tapit), who figures to benefit most if the pace gets hot.