Manganaro on a Mission 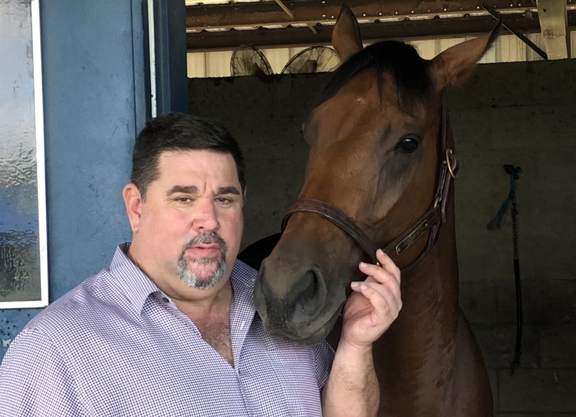 The Manganaro name is a very familiar one in the horse racing game. A third generation horse owner, Paul Manganaro finds it difficult to recall a time when horses, and racing, was not part of his life. Manganaro got his first taste of racing at a young age, courtesy of his grandfather John, who was a plasterer by trade, and father John Jr., and uncles Frank and Anthony. Anthony Manganaro went on to found the boutique breeding operation Siena Farm, currently spanning 225 acres in Paris, Kentucky.

“When my grandfather retired, his only interest was horseracing,” recalled Manganaro. “So we started claiming horses at Suffolk Downs in the early 1970s.”

And what was the thing that got him immediately hooked?

“It definitely starts with the love for the horse and the animal,” he said. “I remember going to the track in the morning, hearing the pounding of their hooves and their nostrils flaring. Then it just developed from there into the competitive nature of the sport, the people you get to meet from a diverse background, and the thrill of going to an auction and on race day.”

According to Manganaro, his passion for horses and racing ensued throughout his teenage years.

“I remember the summer before my senior year at the University of Massachusetts, my good friend and roommate, Ned Toffey, we decided we didn’t have any girlfriends or a job, so we lived in Lexington for the summer,” Manganaro explained. “I took a class at UK, and we toured all the farms during the day. And we really had a good opportunity to see horses like Alleged, Affirmed, Alydar and Seattle Slew. Unfortunately, we were just greenhorns at that time, and I remember we had a book of notes, physical notes on these horses, and most of it just says, ‘Nice big brown horse.’ Obviously, it evolved from that to now, where my buddy is the General Manager of Spendthrift Farm.”

Gradually expanding his bloodstock holdings over the ensuing years, Manganaro currently owns a variety of equine interests, including mares, foals and 25 stallion shares, in addition to six horses in training, raced under his name or in partnership. Chief among his current bloodstock holdings is Remanded (Elusive Quality), campaigned under his nom-de-course Manganaro Bloodstock and David Ingordo. The 3-year-old earned TDN Rising Star status when coming from off the pace to graduate at Gulfstream Park Feb. 16.

“She was training like a winner and she proved it that day,” said Manganaro.

He added, “David and I purchased her late at the [2018] Keeneland [September] sale. She was hip number [3615], and the intent was to pinhook her. We took her to the OBS April sale and she breezed wonderfully, but just didn’t get the attention we thought she warranted, so we took her back. Thus the name–Remanded.”

In regards to what’s next for the daughter of Sleepless Dixie (Dixie Union), he added, “I’m hoping she can get to a mile, mile and a sixteenth, and we’ll let her take us along for the ride. We’ll obviously point to something at Keeneland.”

Further expanding his stake in the industry, Manganaro joined forces with Ingordo to form Belladonna Racing. Launched in 2019, the partnership currently has six fillies in training with Cherie DeVaux, who is currently at her winter base of Payson Training Center in Indiantown, Florida.

“I always thought about starting a partnership because I have many friends back in the New England area that wanted to get involved, but I knew the risk in the business,” explained Manganaro. “I have a business relationship, and now friendship, with David Ingordo and Cherie DeVaux. So, when the idea came about to start a partnership and join with David and Cherie, I thought it was a good time to do that.”

When asked about his initial impression of DeVaux, who worked as an assistant for trainer Chad Brown for eight years before venturing out on her own in the spring of 2018, Manganaro said, “I met Cherie about a year and a half ago when she was just getting started. I think I was one of her first clients. I saw a very intelligent woman, who loves her horses, who’s dedicated, and who had a good background. And she’s got a steady hand. She doesn’t get too high after a good victory, or too low when something goes wrong. And, she definitely loves her horses like they’re her own kids.”

Outlining the initial partnership structure, he offered, “It all starts with the athlete and then we look at the pedigree and we see if it fits our budget. We bought fillies mainly because of the residual value they have, and we went out and purchased six fillies. The ultimate plan is to increase their value through their race record, and eventually be sold either privately or through public auction.”

The 20-strong partnership has had five starters, four winners, including first-out winners Bayerness, Curlinesque and Akor. Following her Keeneland graduation last fall, Bayerness returned to win going a mile in the slop at Churchill Downs Nov. 30.

“She’s an elegant looking filly with some pedigree and just a tenacious will to win,” Manganaro said of Bayerness. “We don’t want to get too far ahead of ourselves, but we’re hoping she’s [GI Kentucky] Oaks caliber, but she’ll have to prove that on the way up.”

And one of the stepping stones to sort out the women from the girls will be GII Fasig-Tipton Fountain of Youth S. weekend, with the big race contested at Gulfstream Park Feb. 29.

“Right now, the plan is on [Friday, Feb. 28], we have Curlinesque pointing her for an allowance race and we think she is stakes caliber too,” he said.

On the Fountain of Youth undercard, Belladonna’s Veruca will contest the GIII Herecomesthebride S., while stablemate Bayerness is scheduled to line up in the GII Davona Dale S.

Veruca, third in her career debut sprinting on the turf at Keeneland, took her dirt bow at Churchill in November before finishing seventh in the seven-furlong Gasparilla S. at Tampa Jan. 18.

“Bayerness and Veruca will be tested for class in their upcoming starts, but we think they have a bright future,” he said.

Looking ahead to whether the Belladonna program might be altered in 2020, Manganaro added, “It’s got to be slightly changed. The meat of the program is going to be the same, but we’re going to up the ante a little bit and look to purchase between eight and 10 2-year-olds, starting with the OBS March sale. And we’ll mix in a couple of colts this time, too. Originally, it was all fillies, but this time we’re going to look for a mixture, but we’re not going to set a number, we’re going to pick the best available athlete.”

Manganaro, whose recent success has been built on four decades of experience in the business, acknowledges that the thing that makes it all worthwhile is something that doesn’t come easily in the game.

“I’ve learned in this business over the years, you see people from the most successful businesses in the world at the highest point, they’ve had everything go right in their lives, still turn into little children when their horses win,” he said. “There’s nothing like it because the lows are pretty low, but the highs are extremely high. And you really have to be humble and respect the opportunity your given. And when you can win a race, we’re in a sport where, if you’re winning 20% of the time, you’re an all-star. So, you really learn how to appreciate that.”