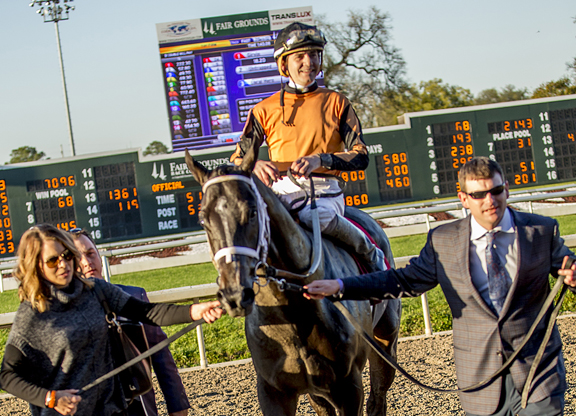 There are plenty of different paths to get a horse on the GI Kentucky Derby trail, but this isn't one that you hear about every day.

Named after the 37-year-old's hometown in Texas, the lightly raced sophomore Girvin (Tale of Ekati) announced his presence with a powerful 8-1 upset in the GII Risen Star S. at Fair Grounds Feb. 25.

“I buy all of them to sell,” Grady explained. “Mainly, I'm a pinhooker. I race by default, if you will.”

Girvin, purchased for $130,000 as a FTKOCT yearling, was subsequently scratched due to “minor issues” at the following year's OBS April and Fasig-Tipton Midlantic 2-year-old in training sales.

“Obviously, it wasn't anything really bad,” Grady commented. “But we didn't feel comfortable selling the horse or working him at the sale. We were running out of time to sell him and my farm manager Bobby Dodd said, 'I think this is a nice horse. Let's try to run him.' We do that every once in a while. I don't mind racing one if they're not ready to sell.”

Girvin, currently sitting in third place with 50 points in the Kentucky Derby qualifying standings, is being aimed at the GII Twinspires.com Louisiana Derby Apr. 1. Produced by the unraced Malibu Moon mare Catch the Moon, the half-brother to graded winner Cocked and Loaded (Colonel John) is trained by Joe Sharp.

“It's uncharted waters for me and my wife Misty,” Grady said. “She loves the horses, too. I don't know how to feel yet. It's surreal–that would be the word I'd put on it right now. Just to have a horse of this caliber and also to be right and have these horses show up, it's pretty fulfilling. We're on cloud nine–me, my wife and my [three] kids.”

Before Girvin takes the next step on the road to Louisville, it's back to business for Grady at next week's two-day OBS March 2-Year-Olds in Training Sale. Selling through consignor Bobby Dodd's draft, Grady's offerings include:

“We buy anywhere from 30-40 a year,” Grady said of his approach. “We've got a really good consignment [at OBS March] this year. They all prepped really well. Proper horses–it ought to be fun.”

“There's a veterinarian in Texas that grew up in the same town that my wife did–Dr. Joe Cannon–and he's been pinhooking for 30 years or so and he got me in the game,” Grady said. “I had some successful businesses and had some extra money and I always loved horses. I grew up on a ranch in West Texas, Girvin to be exact, and I was always around horses. I roped and rodeod, and always had a fondness for the racehorses, particularly Thoroughbreds. It was always pretty amazing how far and fast they could go–the good ones, you know?”

“One of the first horses I bought was Kauai Katie and I was hooked from there,” Grady said.

“Me, my wife and kids genuinely love the sport and all facets of it,” Grady concluded. “I'm a very A.D.D. individual, so a lot of action is for me. I love the claiming game with Joe Sharp–I sent him his first horse to train and it's built into a very strong friendship. We have a lot of fun together.”

The fun continues for Grady and company with the first of three breeze shows beginning in Ocala Thursday morning for the upcoming OBS March Sale.