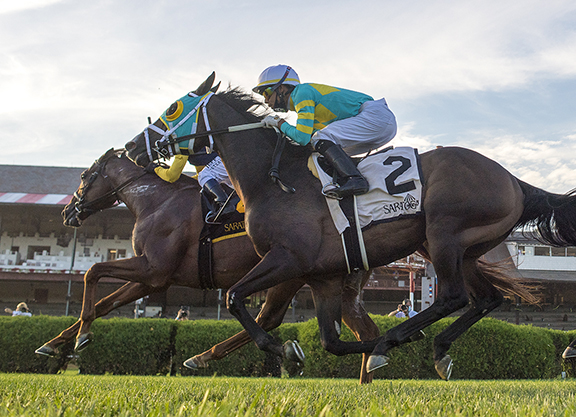 When it comes to Grade Is on the turf in New York, it is typically Chad Brown who has three or four strong entries. However, in Saturday's GI Sword Dancer S. at Saratoga–a “Win and You're In” qualifier for the GI Breeders' Cup Turf–Brown is surprisingly absent and it is Mike Maker saddling a strong trio.

Cross Border (English Channel) appeared to come up up a neck short of likely race favorite Sadler's Joy (Kitten's Joy), who won the 2017 renewal of this race, in this venue's GII Bowling Green S. last time Aug. 1, but was promoted to first after that re-opposing rival was disqualified and placed fourth for interference. Prior to that, he romped by 6 1/4 lengths in the state-bred Lubash S. at the Spa July 22.

“I don't know what it is about Saratoga, but he seems to flourish up here,” said Maker's assistant Nolan Ramsey. “Not only does he show it in his past performances, but physically the horse does well up here. His coat looks great and he really enjoys his training. We nicknamed him 'The Machine' because he just really gets into his training. I couldn't pinpoint exactly what it is about Saratoga, but he likes it up here.”

His stablemate Aquaphobia (Giant's Causeway) is the latest example of Maker's success at the claim box. Haltered for $62,500 in January, he won the Old Man Eloquent S. in the claiming crown Feb. 17 and was fourth next out in the GII Mervin Muniz Memorial S. at Fair Grounds Mar. 21. Runner-up in the Sunshine Forever S. back in Hallandale May 9, the bay was fourth in Churchill's GII Wise Dan S. June 20 and captured the GI United Nations S. at Monmouth last out July 18, good for a 103 Beyer Speed Figure.

Completing the Maker trio is Marzo (Medaglia d'Oro), also claimed for $62,500 back in August of last year. Capturing the GIII Sycamore S. at Keeneland in October, the gelding was third in his seasonal bow in the GIII John B. Connally S. at Sam Houston Jan. 26. Seventh in the Mervin Muniz, he was subsequently shelved and resurfaced in the Bowling Green, where he set the early pace before fading to fifth.