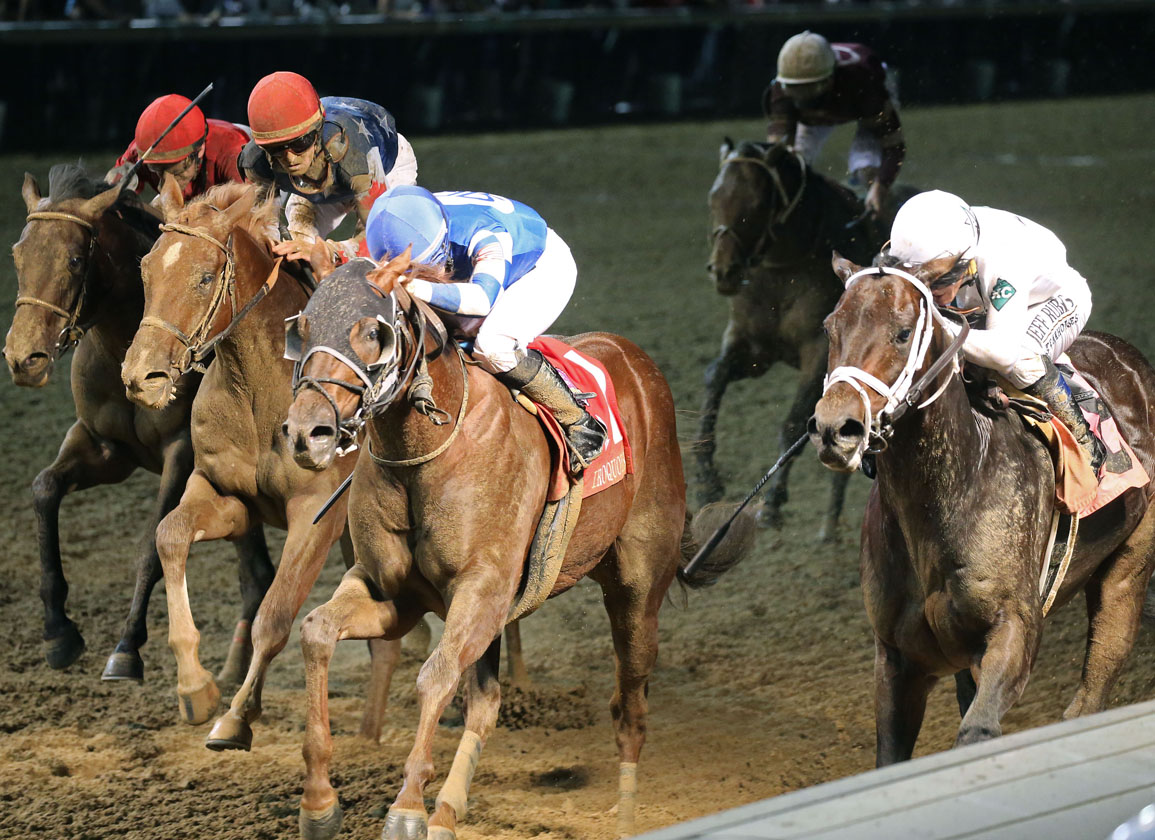 Major General (white bridle, inside) gets up in the Iroquois | Coady

It is still relatively early days in his Turf adventure. But no matter how much Paul Farr can build on what is fast becoming a pretty serious commitment, he may never experience a more succinct sample of its ups and downs–and how bewilderingly entwined those tend to be–than his debut involvement in a graded stakes.

That came just a few days ago, in the GIII Iroquois S. at Churchill: the first chance to bank starting points for a certain race staged on the same track next May. Time to start dreaming. Unfortunately Magnolia Midnight (Midnight Storm), a Colonial Downs maiden winner owned in partnership by his Titletown Racing Stables, dropped right out to finish last behind Major General (Constitution).  On the other hand, the exciting winner happens to be the first foal out of an unraced daughter of Uncle Mo, No Mo Lemons, Farr had acquired from the estate of the late Gerry Dilger for just $70,000 at Keeneland last November.

That could obviously prove a pretty sensational bargain, if Major General can continue along the Derby trail the way he has started. No Mo Lemons, after all, is still only six and Farr has already sounded out WinStar about sending her back to Constitution next spring, to breed a sibling to Major General. But the spectrum of horseracing fortunes extends far wider even than the gulf dividing the two Iroquois runners in which Farr had some kind of stake.

For back in the spring No Mo Lemons had already promised an early dividend on her purchase, when delivering the foal she was carrying at the sale. Dilger could scarcely have chosen a more fashionable young stallion for her first cover. 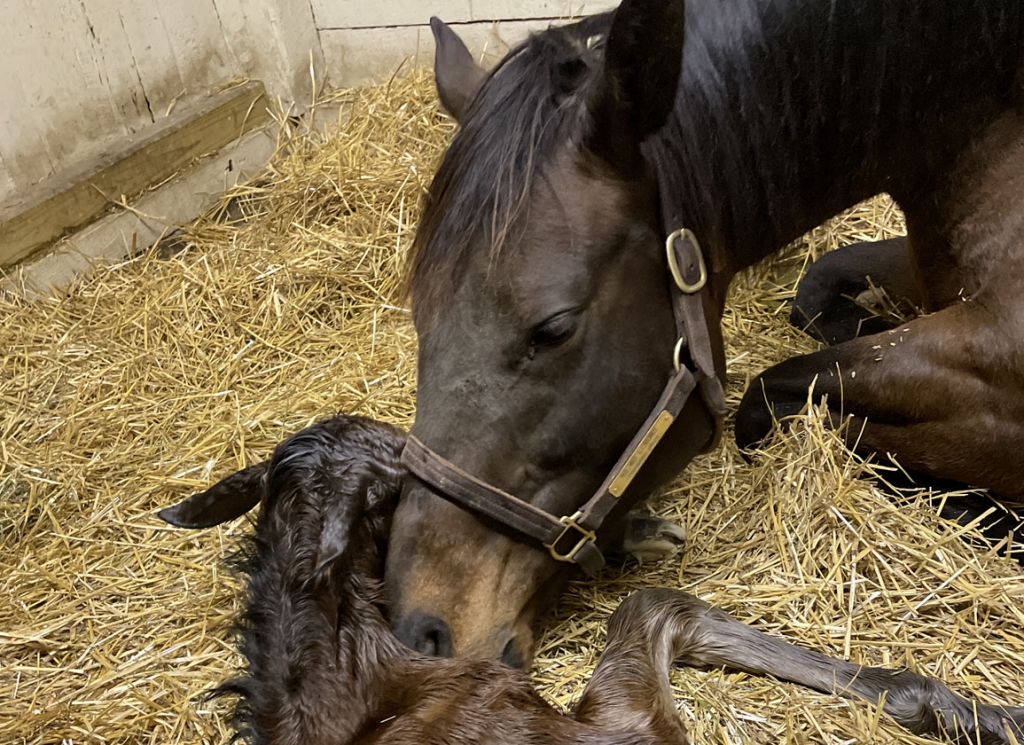 “So she produced this beautiful Practical Joke filly,” Farr relates. “I mean, just gorgeous. And, in fact, one of the main reasons I bought her had been the difficulty I'd had, along with some of the syndicates I was in, trying to bid on Practical Joke yearlings the prior September and October. They kept going for crazy prices, or what I thought crazy at the time. Of course, his progeny have meanwhile been performing on the track as well. But when I kept being outbid, I thought, 'Screw this, I'm going to go a little farther back in the timeline and buy a mare in foal to him instead.' And I liked this one's whole page and, of course, everything that Gerry Dilger had done over the past many, many years.”

Sure enough, the Practical Joke filly was an immediate standout among the 10 foals delivered by the Titletown mares with Sally Lockhart at Ballyrankin Stud. But then disaster struck.

“With that new rotavirus strain that popped in the Lexington area, at the beginning of the year, we had both the mare and her filly in quarantine for three weeks at Rood and Riddle,” Farr says. “And actually, we had just about got the foal over the parasitic infection–only for her then to spike an infection in her knee. We did everything we could. We tried several different cocktails of antibiotics. But when they're so young, they can't really do that aggressive a treatment. And finally the recommendation came from the vet that there was nothing more we could do, and we had to make the very hard decision that she shouldn't suffer anymore.”

Farr remembers, with bitter affection, kissing the little filly on the head in those last days; and subsequently visiting No Mo Lemons at Ballyrankin, which is just a mile up the road from the clinic. During the miserable period of confinement, the mare had exuded maternal dismay; a distraught, helpless sense that her foal, gated off within their cramped quarantine stall, was not in a good place. It was gratifying now to sense an almost palpable relief in the mare, that the shared ordeal was over.

And if Farr couldn't have been given a more painful reminder of the perils that may always lurk among Thoroughbreds, even after you have shown the most astute judgement, then it's not as though he needed any schooling in the merits of spreading risk. In his business life, that had long been his governing instinct.

It was actually in leading former employer PPL Corp's acquisition of two major Kentucky utilities, around a decade ago, that Farr was first introduced to the lifeblood of the Bluegrass. Several members of the management teams at those utilities were in syndicates together, claiming horses, and Farr saw the fun they were having. After a stint at the reins of a spin-off merchant power generation business, a buyout put Farr in a position to develop his nascent interest. 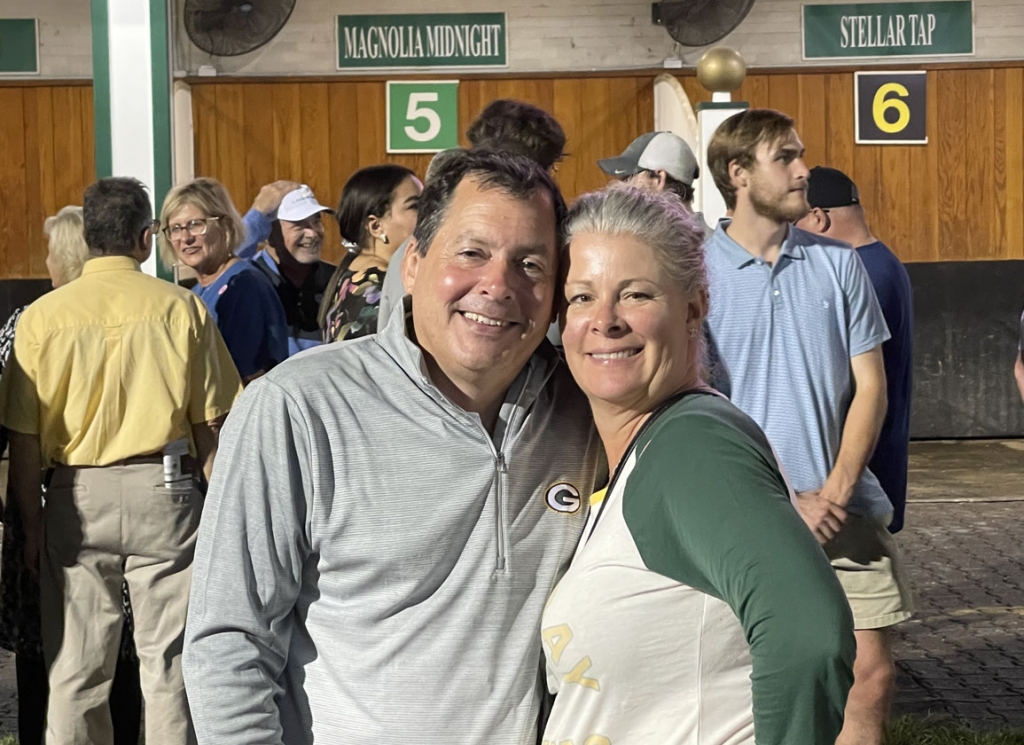 “I was in a business very much oriented to risk management,” Farr explains. “So I felt pretty comfortable with the concept of spreading your risk with different trainers, different partnership groups, much as you do different assets in different locations. So while I'm still getting my legs under, I'm okay with managing exposure and nothing about the business scared me in any way.”

Inevitably, even so, seeking the right fit was a process of trial and error. There were attempts to cut corners. Farr soon discovered, for instance, that measuring the thickness of the cardiac wall was no substitute for the kind of heart that's needed in the heat of racetrack battle. So while auspicious physical attributes could and should be factored into decision-making, he soon realized that the all-important competitive desire would only begin to be disclosed many months after a yearling leaves the ring. 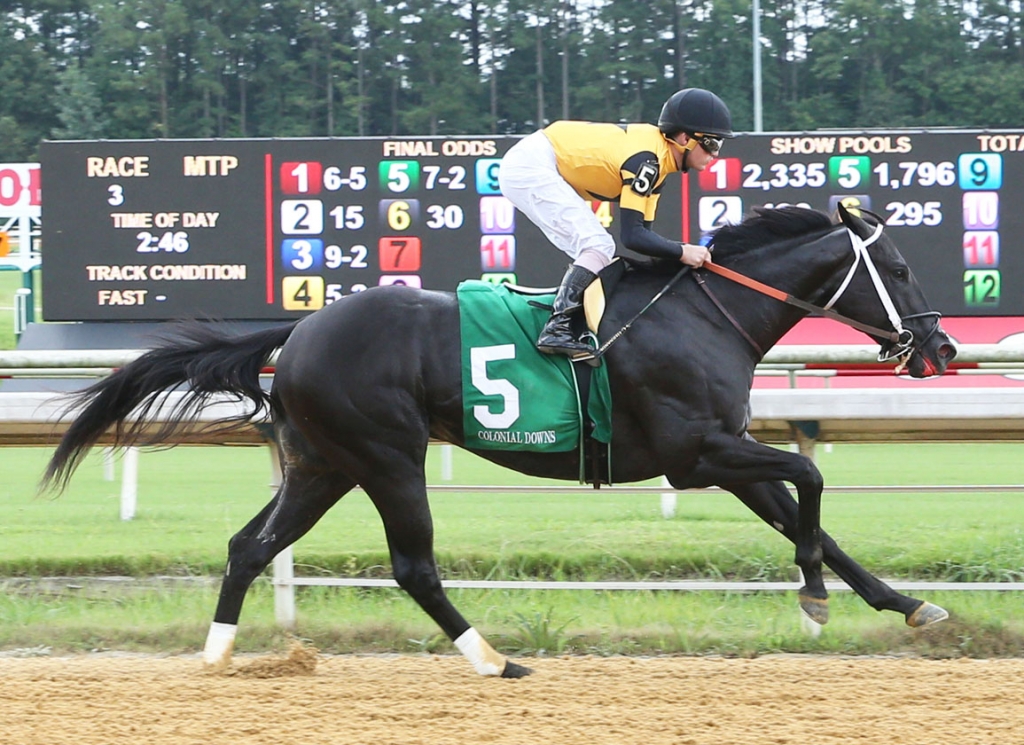 In the end, Farr and his wife Kym evolved a strategy of building partnership at different levels. On the one hand, for instance, he is involved with some buddies at Rainbow's End Racing claiming horses in New York; at the other end of the scale, equally, he's also contributing to the new Colts' Group put together by Brad Cox, Bradley Weisbord and Liz Crow. Having enjoyed his first experiences partnering with West Point Thoroughbreds, meanwhile, he has also made a couple of fresh commitments with that team; and then there's a little extra shopping with his pal Staton Flurry of Hot Springs, whose Flurry Racing Stables has a stake in Shedaresthedevil (Daredevil). Farr has also partnered with Sol Kumin (Madaket Stables) on a number of horses in the past two years.

“I learnt my lesson several years ago trying to do things more on the 100 percent,” Farr reflects. “Through all these different avenues I get to share the experience of a lot of really smart people–whether that's Clay Scherer, who helps Staton and me, or the whole infrastructure at West Point, or Liz Crow, or Tom Morley who does the training for Rainbow's End in New York.

“Brad Cox probably trains more horses that I have an interest in than any other trainer, but then think about all those guys on the West Point team: they have John Sadler out in California, there's George Weaver, there's Shug McGaughey, there's Christophe Clement, Dale Romans, Steve Asmussen, Dallas Stewart, so many relationships. I was listening to a podcast they put out to the ownership group the other day, with Dallas Stewart, and Terry Finley was mentioning how they go back 30 years together. So doing things this way lets you tap into deep relationships, and aligns you with people with deep knowledge, people that are world-class.”

And that's also the level he sees in the counsel and empathy of Lockhart, now truly like family to him. In principle, he intends to keep Titletown's breeding and racing operations separate. No doubt some occasional flexibilities will be required, but it's the commercial possibilities that are exciting about the emergence of Major General. For his dam's first Titletown cover, Farr and Lockhart settled on Kantharos, seeking a slightly more streamlined animal after her first three foals–including the Always Dreaming weanling sold alongside her last November, to Steven W. Young for $95,000–all came up a pretty generous size. 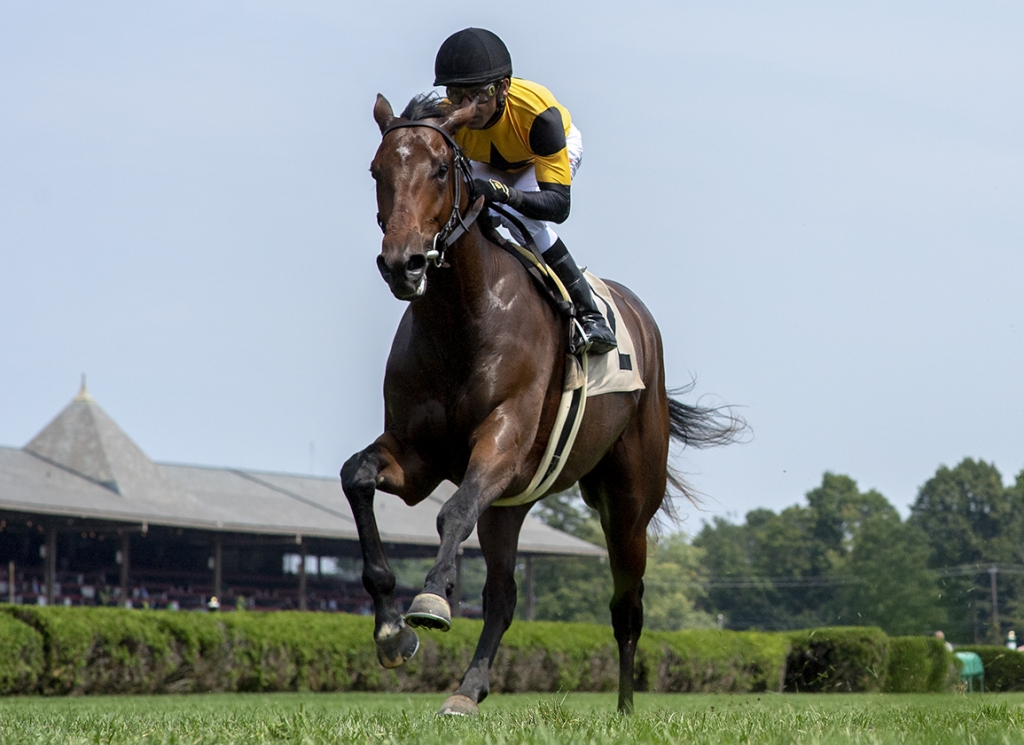 Not that this windfall for No More Lemons is the only excitement for a program gathering momentum all the time. At the same auction where he found her, Farr gave $240,000 for Swiss Skydiver's half-sister Is It Gold (Indygo Shiner), and the Nyquist colt she was carrying is evidently a knockout. Within 24 hours of Farr's first involvement in a graded stakes, moreover, Dripping Gold (Lemon Drop Kid) was fast-tracked to Grade I company in the Summer S. after a debut success at Saratoga for a partnership also including West Point Thoroughbreds and John A. Ballantyne. Shug McGaughey confessed himself rather disappointed with fifth place at Woodbine, and believes there remains better to come. But already the next cycle promises ever more action: the Weisbord-Crow group alone gives him a piece of the action in a couple of dozen elite Saratoga and Keeneland graduates. And Farr is also involved, meanwhile, in a Tony and Kim Dutrow group now prospecting the big yearling sales in Europe. 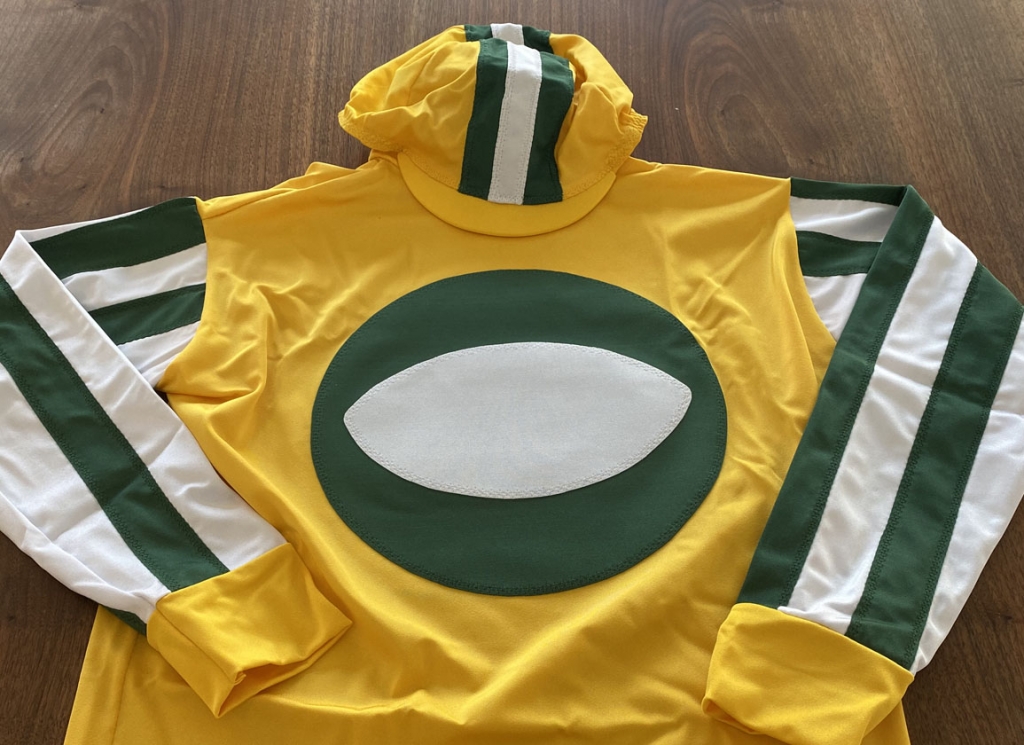 Titletown is named for Farr's hometown and his beloved Green Bay Packers and their 13 championships, and there's no mistaking the sense of purpose that could someday bring him to the equivalent of Super Bowl territory with Thoroughbreds, too.

“To have 2-year-olds running in a Grade III and a Grade I, a day apart, was very exciting and I hope that as young horses both will improve for their experience,” Farr says. “And obviously it was fantastic to see Major General do his job for his dam, and get the 'Win-and-You're-In' for the Breeders' Cup. Hopefully he can go on and do fantastic things.

“Okay, with the Practical Joke foal, Lady Luck put her thumb on the scale a little bit the other way. But that's part of this game, with its amazing ups and downs. I have tended to be somewhat lucky in business, and in life. I've got a great family, five kids, and done great things with my companies. At the level we're talking about, you do need the resources to compete. And when I put a dollar to work, I don't necessarily expect to get that dollar back. I'm very fortunate that I don't need to–though it would be nice, right, to have this stuff work.

“But for me, everything in life comes down to the people part. I just really have to enjoy who I'm involved with. With the New York group, those are smaller dollar amounts. But, same thing: wonderful people. Anybody can put money to work. But horses have tragic things happen, horses have amazing things happen. Irrespective of the size of the check, it's about being with fantastic people that you enjoy spending time with, and going on that roller coaster ride together.”