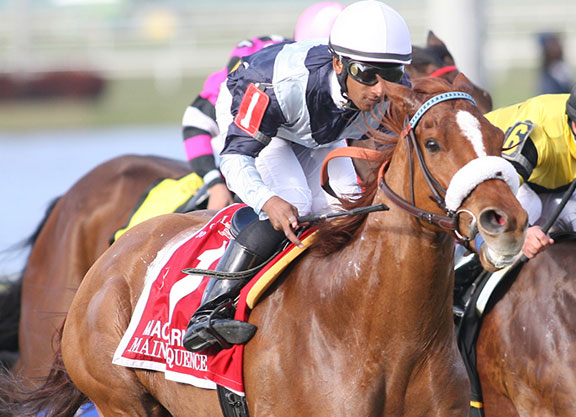 “Following Main Sequence’s poor performance in the United Nations [Stakes], a thorough veterinary examination was carried out last week,” Cooper stated in a post on the website of trainer Graham Motion’s Herringswell Stables. “A tendon tear was discovered and the decision has been taken to retire him. The 2014 Eclipse Champion Turf Male and Eclipse Champion Older Male has given his owners great pleasure throughout his career.”

The posting by Herringswell Stables added: “It is with heavy hearts that we share this information along with the news that his regular rider, Rajiv Maragh, is recovering from serious injuries sustained last week during a race at Belmont. Having a horse of this calibre who consistently performed at the highest level is an exceptional privilege. We are grateful to the Niarchos family’s Flaxman Holdings and to David Lanigan, who facilitated the transfer of Main Sequence to Herringswell at the beginning of 2014.”

“[Retirement] is something we’ve been talking about since we discovered the injury,” Motion told the TDN. “It’s a lesion right in the center of his tendon. He’s perfectly sound on it, but the tendon is inflamed and he does have a small tear in it. At the end of the day, this is an injury that some horses can come back from, but the [Niarchos family] felt that he’d done enough and he doesn’t owe anyone anything and he’s going to be a year older. He’s going out a champion and we felt that it’s the right thing to do.”

Main Sequence won all four of his starts against Grade I company last season in America, capped by a triumph in the GI Breeders’ Cup Turf at Santa Anita Nov. 1. Winner of Gulfstream’s GII Mac Diarmida S. to begin his 2015 campaign, the chestnut finished seventh in the G1 Dubai Sheema Classic Mar. 28 prior to his appearance in the United Nations earlier this month.