Magical Display in the Offing 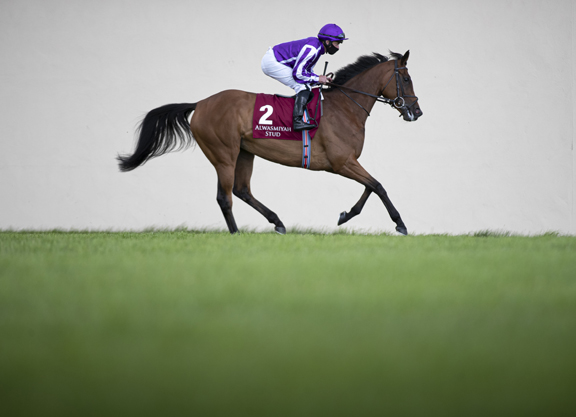 Avoiding her arch-foe Enable (GB) (Nathaniel {Ire}) at Ascot, Magical (Ire) (Galileo {Ire}) is kept to home soil to extend her awe-inspiring record in domestic races in Sunday's G1 Tattersalls Gold Cup at The Curragh. With the race open to 3-year-olds in this unusual year but drawing only one which is her stable's Armory (Ire) (Galileo {Ire}), Coolmore's mare supreme looks to have a straightforward task in accomplishing a ninth success from 12 starts in Ireland. Her latest, in the course-and-distance G1 Pretty Polly S. June 28, was arguably her finest as she was giving 12 pounds weight-for-age and a 4 1/2-length beating to the subsequent G1 Irish Oaks runner-up Cayenne Pepper (Ire) (Australia {GB}). Last year's G1 English and Irish Champion S. heroine has five victories at the top level to boast of, including in this last year and her odds reflect the prospect of her making it six here.

“She is very well and we've been very happy with her since her last run,” Aidan O'Brien said of the 5-year-old, who will have to wait a bit longer for a rematch with the Juddmonte mare. “Magical and Japan were being trained for the King George and you're never sure what is going to happen, but the two of them seem to have come to this weekend very well. Magical was happy to stay at home and run on a track that she knows without having to travel–it looks like the race is going to suit her lovely. She's only had the one run this year, whereas Japan has had the two runs and the King George was a race we had our eye on with him for a long time. The Tattersalls Gold Cup is a great race to have at the Curragh, and it's a lovely race for Magical ahead of the autumn.”

Joseph O'Brien saddles Lloyd Williams' admirable Buckhurst (Ire) (Australia {GB}), who beat Magical's stablemate Sir Dragonet (Ire) (Camelot {GB}) in the G3 Alleged S. over this track and trip June 27 and his level of consistency could easily see him pull off a group 1 placing. if there is a suprise package in the line-up, it could be Zhang Yuesheng's June 12 G2 Mooresbridge S. winner Leo De Fury (Ire) (Australia {GB}) who looked a different proposition when hammering Ballydoyle's smart Fleeting (Ire) (Zoffany {Ire}) by three lengths in that 10 1/2-furlong prep here.

Munich's G1 Grosser Dallmayr-Preis shares the same status as the Tattersalls Gold Cup, but it will take considerably less to win which is good news for Godolphin's Barney Roy (GB) (Excelebration {Ire}) and Chantal Regalado-Gonzalez's Patrick Sarsfield (Fr) (Australia {GB}). The former, who took the G1 Jebel Hatta at Meydan Mar. 7, was third in the G1 Prince of Wales's S. over this mile-and-a-quarter trip at Royal Ascot June 17, while the quick-progressing Patrick Sarsfield comes into this on the back of an authoritative success in the nine-furlong G3 Meld S. at Leopardstown July 11. “Barney Roy put up a decent performance on ground that was slower than ideal in the Prince of Wales's Stakes,” Charlie Appleby said. “He came out of the race well and this has always been the target since. He goes into this race in good shape and a repeat of his runs so far this year should make him the one to beat.”

In Ascot's G3 Betfred Valiant Fillies' S. over a mile, Billesdon Brook (GB) (Champs Elysees {GB}) looks for compensation for her neck defeat in Newmarket's G1 Falmouth S. July 10 in which she split Nazeef (GB) (Invincible Spirit {Ire}) and Terebellum (Ire) (Sea the Stars {Ire}). She encounters Lael Stable's unbeaten and still unexposed Miss O Connor (Ire) (Roderic O'Connor {Ire}), who was last seen taking the G3 Prix Perth at Saint-Cloud in October. “It's a lovely race for her and she's in great nick,” trainer Richard Hannon said of Billesdon Brook. “She has run good races at Ascot and elsewhere. It's all to do with if she's in form on the day–if she is then she's very hard to beat and if not she runs moderately, but we never know until a furlong and a half out. She's a star–no matter how she runs, she's loved at home. To have a Classic winner still in training at five is great for racing and we're all enjoying the ride.”

Also on the card is the G3 Princess Margaret Betfred S., in which the increasingly-elusive TDN Rising Star More Beautiful (War Front) needs better ground than she encountered when ninth in the G2 Queen Mary S. at the Royal meeting June 20. Third in that contest at 100-1, Caroline Dale (GB) (Lethal Force {Ire}) has since won at Windsor July 6 and heads a two-pronged attack from the David Loughnane stable alongside the July 10 G2 Duchess of Cambridge S. third Santosha (Ire) (Coulsty {Ire}). The form of that Newmarket contest was boosted by the subsequent Listed Star S. success of the runner-up Fev Rover (Ire) (Gutaifan {Ire}) and the trainer is relishing seeing them both in action. “We only have 10 or 11 two-year-old fillies in the yard, so to have two of their calibre is fantastic,” he said.

“I would prefer not to run them against each other, but you have to train them as individuals and it's the right race for them both,” Loughnane added. “I think they both have fantastic chances and I'm very bullish about both. They are both different fillies–Caroline wears her heart on her sleeve, bombs out of the gate and is dynamite in front and if you are good enough to pass her they'll have to fight for it. Santosha likes to take her time and saves a bit up her sleeve–she's very tough. She was green still at Newmarket and when she came with her run Dandalla just drifted across her a bit. She's come on a lot, while Caroline just has so much ability. I think both are borderline on their way to being group one horses.”

At York, the Listed British Stallion Studs EBF Lyric Fillies' S. sees Khalid Abdullah's Franconia (GB) (Frankel {GB}) take on the older horses following her impressive success in Newbury's Listed Abingdon Fillies' S. The form of that 10-furlong Oaks prep has been boosted by the listed win of the runner-up Cabaletta (GB) (Mastercraftsman {Ire}) and the highly-regarded half-sister to the G1 Nassau S. heroine Winsili (GB) (Dansili {GB}) will be a warm order to cap another stellar weekend for Juddmonte. John Gosden said of the homebred, who was forced to miss the G3 Musidora S. here earlier this month, “She scoped with mucus before the Musidora. She has always been a little bit inclined that way and I just wasn't happy with her. She is like her sister Winsili and is very full of herself at home. She is quite a character, but she seems in good form. It was a good effort to break her maiden in a listed race, but she now has to carry a penalty for that victory in this race. The race at Newbury is working out quite well.”

Franconia encounters Mohamed Khalid Abdulrahim's highly-regarded Gold Wand (Ire) (Golden Horn {GB}), who was out of her depth and probably running over too far when a distant seventh in the July 4 G1 Epsom Oaks. Jockey Andrea Atzeni is confident she can bounce back. “I think a mile and a quarter on a flat track like York will suit her perfectly, because she won over that trip at Newbury,” he explained. “She is a filly that we like quite like. We took a chance in the Oaks, because we thought she would be competitive in that race. But it just never happened for her, as she probably didn't have enough experience. She didn't have a hard race in the Oaks and she came out of it fine. We are very pleased with her.”