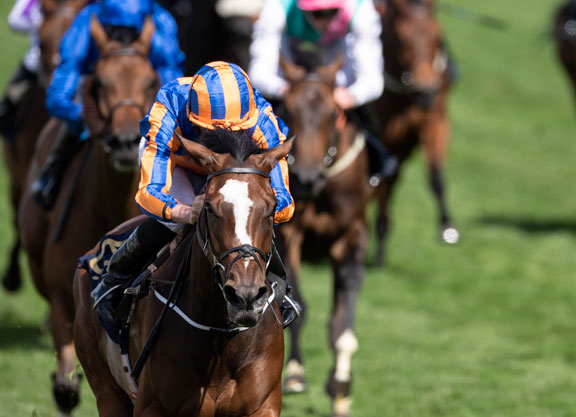 The connections of dual GI Pegasus World Cup Turf runner-up Magic Wand (Ire) (Galileo {Ire}) are considering trying the daughter of Prudenzia (Ire) (Dansili {GB}) on dirt in the upcoming $20-million Saudi Cup on Feb. 29, Racing Post reported. Successful in the Nov. 9 G1 Mackinnon S. Down Under and runner-up in the G1 Longines Hong Kong Cup on Dec. 8, the Aidan O’Brien trainee and Coolmore representative sports nine placings at Group 1 level from 23 starts. She is one of 14 entries for the master of Rosegreen spread throughout the card at Abdulaziz Racecourse. G1 Investec Derby hero Anthony van Dyck (Ire) (Galileo {Ire}) is a possible for the $1-million Neom Turf Cup over the Classic distance, among several others.

“Magic Wand ran another good race in America and seems fine since,” O’Brien told Racing Post. “She’s due to come home this evening. It’s very possible that she’ll be heading to Saudi Arabia next month. We’re thinking about running her on the dirt. It’d be something new for her so we’ll see she comes out of her last run between now and then.

“We’ll have an idea of what we’ll run on the card over the next week or 10 days but I’d imagine Anthony Van Dyck is possible to run over there. Circus Maximus has an entry but may not run. Kew Gardens and Sergei Prokofiev are only possible runners at this stage and we’ll see how things go with them over the next week or so.”