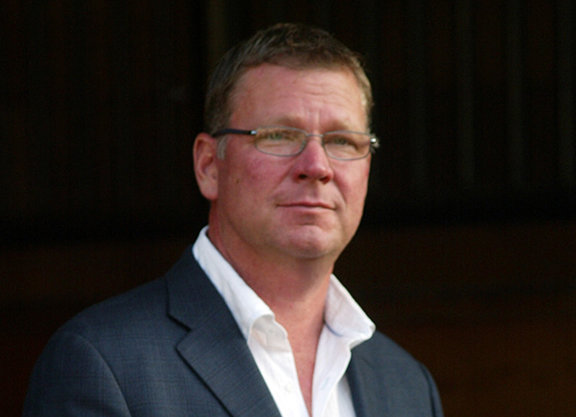 For nearly 30 years, trainer Mike Machowsky has been largely known for a Southern California string out of which the odd diamond has been plucked. As of the middle of next month, he’ll be helping other trainers in their attempts to achieve the same conjuring trick, when he hands in his trainer’s license and picks up the mantle of Fasig-Tipton’s full-time California representative.

“It’s been one heck of a ride,” said Machowsky, about his training career. “I’ve loved it. It’s a hard thing to want to give up if you love it and you’ve done it for so long. But this was an opportunity that I couldn’t pass up. I love the sales and I love California racing, and now, I’m excited to be partnering with such a premier sales company… They’re going full steam ahead to make a quality sales company out here.”

This year will mark Fasig-Tipton’s latest foray into California, with their first auction, a 2-Year-Olds in Training Sale, slated for June 5, followed by a Fall Yearling Sale penciled in for Sept. 25. Both of them will be conducted in the walking ring at Santa Anita.

As per the official announcement, Machowsky will be tasked with “recruiting buyers and sellers,” along with promoting “overall awareness of the Fasig-Tipton brand” and serving as a “point of contact” for interested parties. To sum it up, his role will be to use the broad network of contacts he’s built up in California over the decades–trainers, owners, breeders and farm managers–to help produce a product that will appeal to vendors and buyers from all four corners of the country and beyond, he said.

“It’s all about helping them recruit clients for the sales and to get people to come to the sales,” Machowsky said. The trick, he added, will be to find the right balance between numbers and quality. “If you have the horses, people will come. And so, my main goal is to find the right horses, all different types of horses, at all levels, so everybody has a chance to purchase something.”

And while yes, California’s rather island-like status can make it difficult to lure vendors and buyers out west, Machowsky admitted, he also believes the Fasig-Tipton name, along with the company’s own network of “national and global” contacts, will prove a useful tool in overcoming that obstacle.

“With the quality of company that Fasig-Tipton is, the reputation they have, it’s going to attract people out here,” he said, adding that he’d like to see “some of the consignors back east who used to come out here” return on a regular basis. “We need to get to that point where we have a bunch of horses where everybody’s able to walk away from the sale happy with what they’ve got.”

Fasig-Tipton President Boyd Browning agrees. “We have strong relationships with buyers and sellers throughout the United States,” he said. “We’ve had discussions with some of them about the prospects in California, and I think we’ll have meaningful support.”

As for their reasons for hiring Machowsky, “he’s got a very good reputation as a human being, he’s honest and hard-working,” Browning said. “And he helps provide an instant bridge for those of us who aren’t living in California and haven’t been active in California, but who certainly are aware of the market. He’s our man on the street there.”

Machowsky’s marching into his new position with eyes wide-open, aware first-hand of the tough economic forces pressing in on the industry from all sides. But a thriving market keeps the “whole system here in California strong,” he said, singling out the California-bred incentive awards program as a possible big beneficiary of Fasig-Tipton’s westward expansion.

“I think if we can develop a strong sales program out here with a strong group of Cal-breds going through it, we can also bring more established sires out to California,” he said.

And they, in turn, will entice better mares out West, he added.

“We’ve always had great horses through the years come out of the Cal-bred program, and this can add strength to that.”

Despite his official start-date not slated for another month, Machowsky has already reached out to some of the breeding farms in California, alerting them to his new position. “I have a relationship with all those people, which makes it easier,” he said.

And he’s put out feelers with some of the trainers, too. “I’m just telling them, ‘anything you need, reach out to me.’ I’ll try to help them out. I just want more of our trainers in Southern California and Northern California to buy horses to bring back out here, help support California and the sales.”

During his near three-decades with a license, Machowsky, 53, has won nearly 600 races and bagged over $25 million in prize money. His best horse was Southern Image–winner of the 2003 GI Malibu S., along with the 2004 GI Santa Anita H. and GI Pimlico Special H.

Rather than a long-simmering plan to quit training, Machowsky’s late-career change has happened rather abruptly, facilitated by a series of conversations with Boyd Browning at the turn of the year. “The stars kind of aligned,” Machowsky said.

It wasn’t the financial constraints of training that prompted Machowsky to take the offer, he said. Rather, “I get to spend a little more time with my kids and family and my wife and get a little more quality of life that way,” he said. “I’m still very much involved with horseracing and the horses, which I truly love, along with the people and the clients and the trainers out here in Southern California–people I’ve built friendships and relationships with these last 30 years.”