Home » Archive » Europe » Lyons Takes Long View For Even So

Lyons Takes Long View For Even So 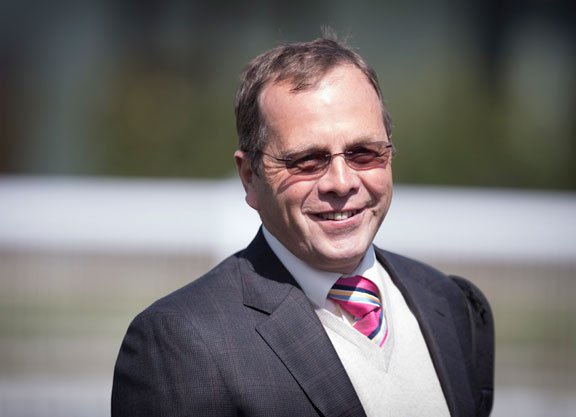 Ger Lyons took his second Irish Classic of the season on Saturday with the Coolmore-owned Even So (Ire) (Camelot {GB}) and is already looking forward to her 4-year-old season.

“A real plan hasn't been made, but her real career could kick in at four because there's a good programme for the older fillies,” he said of the three-time winner. “There's obviously the Yorkshire Oaks, but I wouldn't be in a rush to take on Love, without talking to connections they let all of their horses take each other on, but I don't think I need to do that with her.

“There's no plan at the moment for Even So—she's out in the paddock with Yaxeni and Lemista and she'll be there all of this week at the very least to help her get over her exertions.”

He added: “The initial thinking was to find a little prep and head for [Champions Day at] Ascot.”

Lemista (Ire) (Raven's Pass) added to a fantastic weekend for the Lyons stable with her victory in the G2 Kilboy Estates S. over nine furlongs. The filly, who was racing in the colours of American owner Peter Brant, has Even So behind her in third when winning the G3 Park Express S. in March before racing was halted. She then bounced back to win the listed Victor McCalmont Memorial S. on June 20.

“Lemista is a great filly. It was a big decision to sell her for David Spratt,” said the trainer. “She's winning over a trip shorter than I think is her best, and on ground quicker than I think she wants. If you could see her and Even So work on the gallops you'd be scratching your head, but they turn it on on the track. They lead the baby 2-year-olds on the gallops.”

Lyons added, “The day she won the Park Express we were speculatively black-type hunting, but Chris Hayes rode her and told us we were under-estimating her. I don't think she's an [Irish] St Leger type–I have Nickajack Cave for that, who won the Saval Beg. You could run Even So over a mile and six, or Yaxeni.”