Home » Archive » Shared News » Lukas Back in the Saddle

Lukas Back in the Saddle 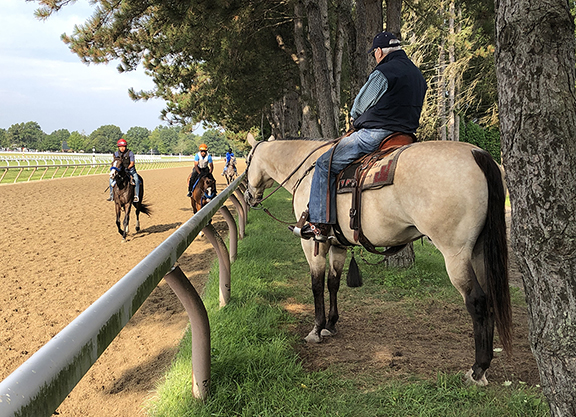 D. Wayne Lukas recently recovered from COVID-19 and back in the saddle (pictured at Saratoga last summer) | Christina Bossinakis photo

The past two weeks has proven a veritable roller coaster ride for Hall of Famer D. Wayne Lukas. After opting to keep his operation in Kentucky for the summer rather than shift to upstate New York as he has done for over the past four decades, Lukas admitted that earlier this month, he began to feel less than 'perfect,' although he didn't present any of the classic symptoms that went with COVID-19. At least not initially.

“I was being checked at the gate every day and I didn't have a temperature and I didn't really have any of the other symptoms, but [wife] Laurie and I decided I should get a test with [Kentucky] Derby week coming up,” recalled Lukas. “My granddaughter, who is a PA [physcian assistant] told me not to mess with getting in line to have a test and said I should come straight to the hospital and we'd have it done quickly.”

He continued, “While I was at the hospital, they found I had some fluid around my heart, which was probably a result of the broken ribs [sustained during a fall from his pony at Churchill Downs last month] that hadn't fully healed. At that point, they concentrated on the heart and didn't think it was [coronavirus]. They did all these tests for my heart and treated me for that, and since they didn't think I had the virus, they sent me home. Later that night, all hell broke loose.”

And things quickly went from bad to worse.

“They later called me and told me I tested positive for the virus. And believe me, they didn't have to call me to tell me that. I felt it. The first two nights were so critical, and I couldn't get my air. I would have done anything to have access to a ventilator at that point. You feel like you're drowning. But once I got through those two nights, I just needed to rest and get my strength back. Once you get through that critical period, even something like putting on your tennis shoes is a major task.”

“The doctors had recommended that I didn't go back to the track for 14 days and I was in complete agreement,” he said with a laugh. “I have now spoken to several people who have had the virus and it seems to affect people in such different ways. For some it's severe and others it's not. For me, it was severe. If it had hit me any harder, we wouldn't be talking right now.”

Following over two weeks on the sidelines, Lukas, armed with a follow-up 'negative' COVID test result, returned to the barn this week.

“I felt much better and was ready to go back, so I just saddled up and got back in the saddle,” said Lukas, who will be celebrating his 85th birthday Sept. 2. “I am not walking around too much and still taking it easy, but I am getting better every day on that count.”

This summer, Lukas campaigned his horses at Ellis Park, where he currently stands in third behind Brad Cox and Ken McPeek in earnings. He is also two wins away from McPeek, who has accounted for nine wins [as of Aug. 25] at the summer meeting.

“I'm back training and the horses are running well,” he said. “We've had a good meet so far and I think we have some live horses for this weekend. We also have a good lineup [Kentucky] Derby week, so we're looking forward to that.”

In regards to the change in plans for the team this summer, he explained, “Aside from [the illness], I think staying in Kentucky this summer was the right decision. Our help was very concerned about shipping into New York, not so much the racetrack but more the community itself. We obviously have a lot of our equipment still in Saratoga, and we'll be back next summer, but I think we really did the right thing in staying in Kentucky. Ellis has been good to us.”

Based at Churchill Downs since his return to Kentucky earlier this spring, Lukas indicated the team's runners would continue the familiar protocol of shipping in to Keeneland to race this fall and closing out Churchill's fall meet before returning to his winter base at Oaklawn Park in Hot Springs, Arkansas in December.

With the worst of it in the rearview mirror, Lukas reflected on some of the struggles stemming from his recent health scare, admitting that the main component that has kept barn operations running smoothly while he convalesced was his team.

“You have to have a key person in your operation,” he said. “Over the years I had many of those people, and now I have Bas [Nicholl]. When the virus hit, I absolutely depended on him. I think we're going to have to bronze him and put him in the infield or something like that.”

And while the barn had been observing the strict protocols in place throughout the pandemic, Lukas said he recognized that the virus was a formidable foe and not one to be taken for granted.

“The folks at Churchill have a force back there to make sure that everybody is following the rules, and our barn was really good on the front,” he said. “We were very adamant on everybody wearing their mask and have hand sanitizer available on all four corners of the barn. But once it gets you, it's got you.”

He was asked if he has any advice for those who might be tempted to cut corners or ignore the pandemic protocols.

“The one thing I would tell everyone is to seriously not under estimate the COVID-19 virus. Whatever you do, don't take it lightly. It gets on top of you quick and you might not be able to get out from under it.”