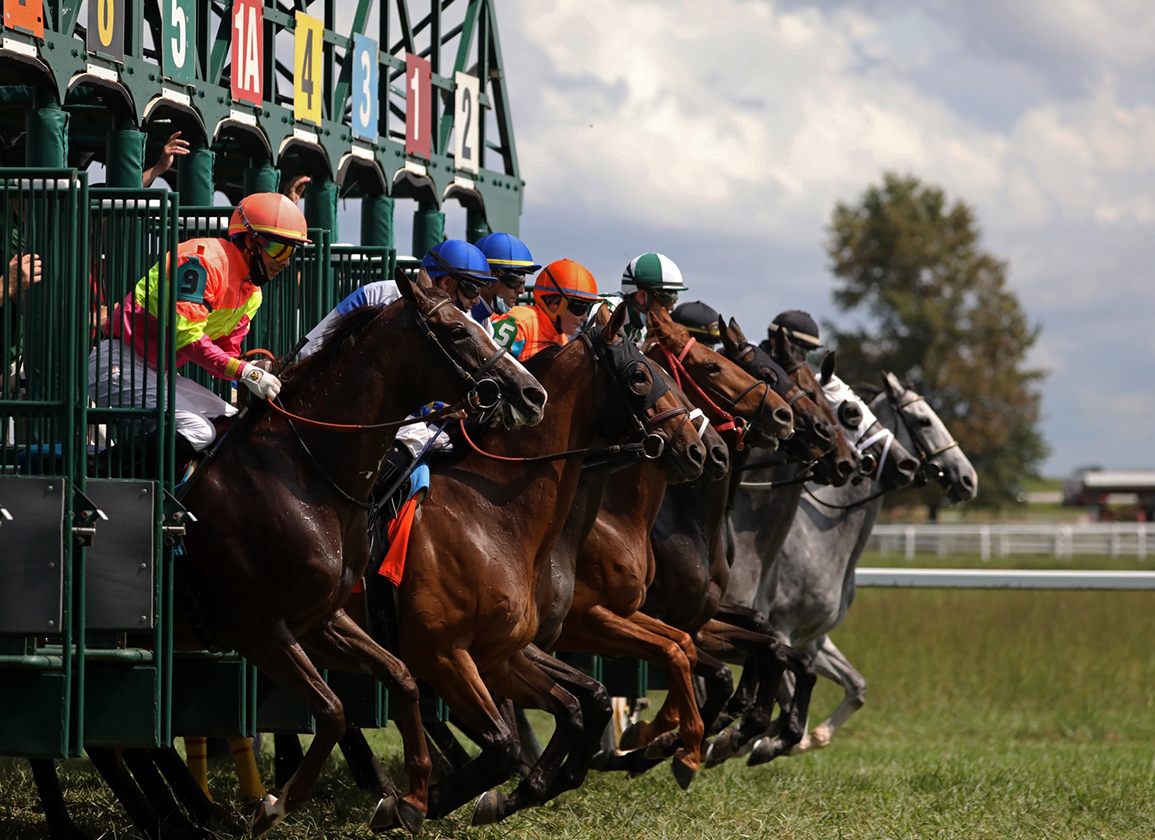 FRANKLIN, Ky. – With huge purses offered during a mighty short season all run over a distinctive European-style turf course, the FanDuel Meet at Kentucky Downs has emerged as a gem of American racing.

It's different, to be sure. Once an obscure little meet quietly contested at a track called Dueling Grounds in a small town on the border with Tennessee, much closer to Nashville than Kentucky's big cities, Louisville and Lexington, it has flourished, gotten noticed and embraced. This year it features six graded stakes, three of them with $1,000,000 purses. Two of them are part of the Sept. 11 program with five graded stakes card and are Breeders' Cup “Win and You're In” races that will be broadcast live on Sept. 11 on NBC.

The season opens Sunday and continues with the second program on Labor Day.

Following an off day Tuesday, the meet rolls on with programs Wednesday, Thursday, Saturday and Sunday over the undulating 1 5/16 miles course. Post time is 12:20 p.m. Central.

“All signs point to a spectacular meet,” said Ted Nicholson, Kentucky Downs' Vice President for Racing. “We think jockeys will be thrilled with the extensive renovation to our turf course. We know horseplayers love our full fields and large betting pools. For the final four days, Kentucky Downs will be the center of American racing, and we look forward to putting on an outstanding show.”

Horsemen know all about the purse money available, the highest daily figures in North America, and fill the entry box for the six-day season contested over eight days.

“The most difficult thing about Kentucky Downs is getting in the races,” trainer Al Stall said. 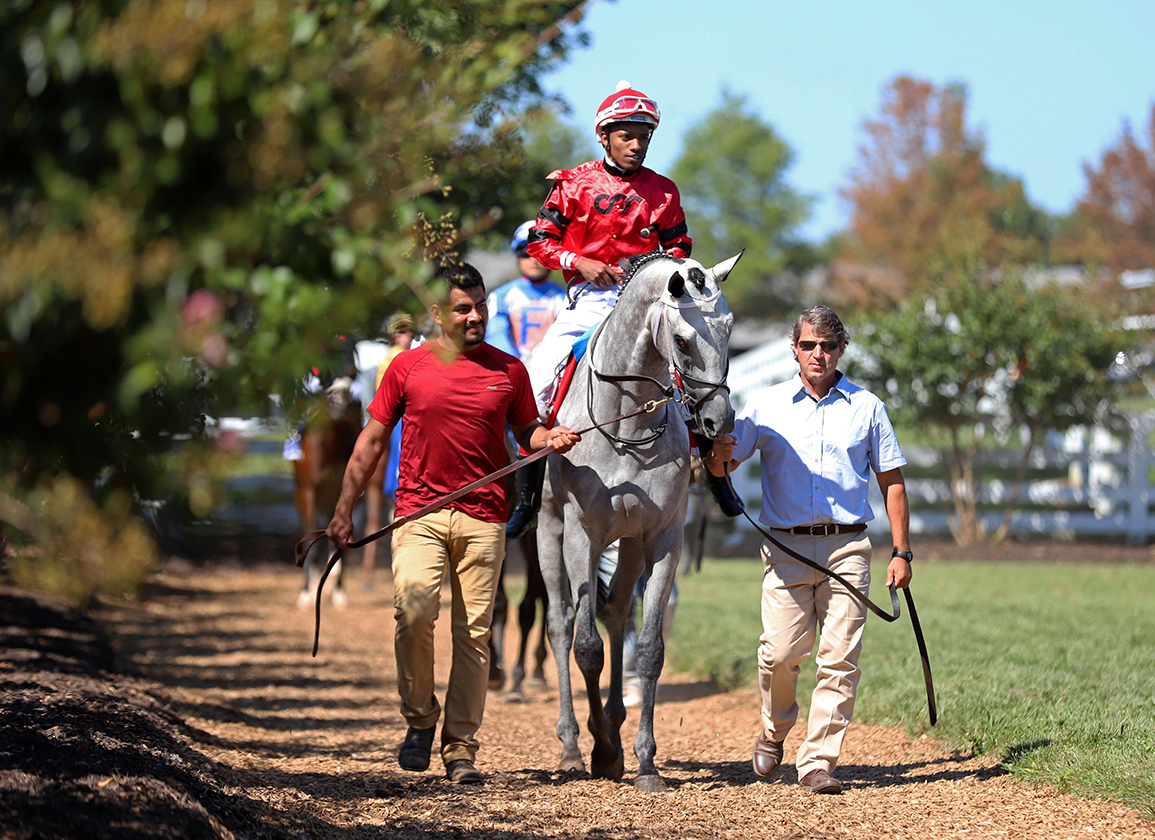 Reacting to the demand this year, track officials have split a pair of races. When there were 31 entries for a maiden special weight race for 2-year-old fillies on opening day, it was divided into two full 12-horses divisions, with a total of seven on also-eligible lists, and bumped the program from 10 to 11 races. The $400,000 listed TVG Stakes on Wednesday drew 21 entries and it was split into two divisions, both with $400,000 purses.

Horseplayers relish the large fields, the lowest blended takeout rates in America and big payouts. In 2020, with no fans on track, the all-sources handle for the first six-day meeting was $59,828,441.

Ken Kirchner, the Director Wagering Development at Kentucky Downs, spent many years in that role with the Breeders' Cup. He said the meet is distinct in America because its large fields are made up of horses from across the country.

“One of the highlights for handicappers and for fans is that you get this amalgamation of horses from different racing circuits around the country that you normally only get at a meet like the Breeders' Cup,” Kirchner said. “When you have more than $2 million a day in purses, not only are your stakes races this mix of New York, Kentucky, Florida, California and other horses, you have that in the maiden and allowance races across the board. It's just a fascinating exercise for the handicapper to say, 'Gosh, I can find great value every single race of this meet.'”

In the decade since the pari-mutuel electronic gaming machines, now called Historical Horse Racing (HHR), were approved to fund purses at the track, the daily average purse has skyrocketed from a nondescript $25,600 in 2011. The average purse for the 11 races on opening day is $218,890.

Earlier this year, the HHR program survived a serious challenge in the Kentucky legislature to the legality of the 3,625 machines in the state. If the HHR pari-mutuel gaming bill had not passed in the legislature, the track likely would have closed.

On Aug. 9, the track announced an eight percent increase in the purses for non-stakes races, except the four $100,000 starter allowances that are qualifiers for the Claiming Crown at Gulfstream Park in December. Maiden special weight races for Kentucky-breds carry a purse of $135,000; first-level allowance races $145,800 and second-level allowance races $156,600. By comparison, the maiden and first-level allowance purses are about double the purses Sunday for similar conditions at Del Mar, while the maiden special weight purses at Saratoga are $100,000 and the allowance purses are $103,000 and $105,000.

Two-time Grade I winner Got Stormy (Get Stormy) is the headliner in the six-furlong $1 million FanDuel Turf Sprint where she will face males again. She earned her second win over males in the GI Fourstardave on August 14. No filly or mare has won the Turf Sprint, which was first run in 1998.

Got Stormy has won 12 of 30 starts, with five seconds and three thirds, and $2,398,403 in purse earnings. In addition to her Fourstardave victories, Got Stormy has finished second four times against males in Grade I stakes in New York, California and Canada.

In the Turf Sprint she is expected to face the Bill Mott-trained Casa Creed (Jimmy Creed) in third consecutive race. Casa Creed picked up his first Grade I victory in the Jaipur on June 5 while Got Stormy was fifth. Got Stormy surprised in the Fourstardave at 12-1 and Casa Creed was third.

Donegal Racing's Arklow will try to become the first three-time winner of the $1 million Calumet Turf Cup. He won the race in 2018 and 2020 and was second in 2019. Arklow is expected to face Calumet Farm's Grade I winner Channel Cat (English Channel) and the 2019 winner Zulu Alpha (Street Cry {Ire}).

Bloom Racing's veteran Snapper Sinclair (City Zip) will race at the track for the fourth time when he starts in a division of the TVG Stakes on Wednesday. He has won two stakes at the track and last year finished second in the race now called the Mint Million Mile.

“We always look forward to-actually point our stable to-this boutique yet premium meeting at Kentucky Downs, said owner Jeff Bloom. “It's unique and charming and it doesn't hurt that that it provides incredibly lucrative purses.”