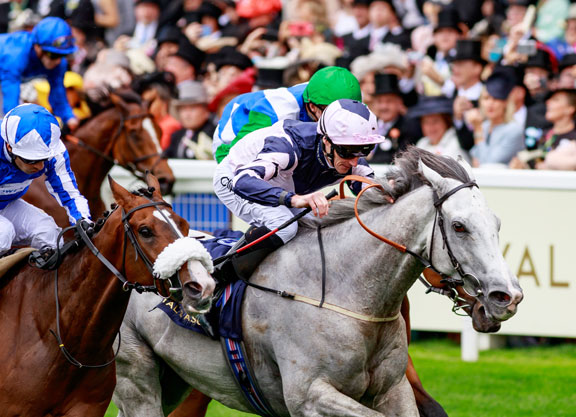 Tuesday's G1 Queen Anne S. will always be recalled with a sizeable footnote as last year's winner Accidental Agent (GB) (Delegator {GB}) planted himself in the stalls and refused to race a yard of the Royal Ascot opener. In a twist of fate that may not have been coincidental, it was the runner-up in 2018 Lord Glitters (Fr) (Whipper) who ultimately prevailed in his absence from combat to provide owners Geoff and Sandra Turnbull, trainer David O'Meara and jockey Danny Tudhope with another red-letter day. In a pulsating tussle between three longshots, the 14-1 chance Lord Glitters crept into contention from rear and in the last 75 yards headed off Beat the Bank (GB) (Paco Boy {Ire}) and One Master (GB) (Fastnet Rock {Aus}), both of whom traded at 20-1. At the line, he was a neck to the good over the former, with One Master looking a non-stayer as she faded from surefire winner inside the final furlong to third, a further 3/4 of a length behind. “He deserves to win a big one like this and when things fall right he's a super horse,” Tudhope said of the journeyman grey who recorded a highly respectable time despite talk of the recent rain slowing the surface. “David said to ride him cold and be brave and if there's one track you can do that at it's here as it's a long way in the last furlong.” Godolphin's 5-1 favourite Barney Roy (GB) (Excelebration {Ire}) was eighth after failing to land a blow.

On the same afternoon that Beat the Bank was winning Goodwood's G2 Celebration Mile last August, Lord Glitters was registering his first black-type success when beating Mustashry (GB) (Tamayuz {GB}) in York's G3 Strensall S. over an extended mile. In the year since he had been bought at the Arqana Summer Sale from Christophe Lotoux, under whom he had been second in the 10-furlong Listed Grand Prix du Lion d'Angers, he had been here four times and won once and been second on three occasions.

On two of them, he had been forced to follow home Accidental Agent in both the seven-furlong Challenge Cup H. in October 2017 and in this prize, with his success coming in the 2017 Balmoral H. at this trip and his other runner-up placing being behind Beat the Bank in the G2 Summer Mile over the round course in July. Outside of Ascot, he had been third in the G1 Sussex S. at Goodwood and runner-up to the afternoon's Listed Wolferton S. winner Addeybb (Ire) (Pivotal {GB})–ironically also ridden by Tudhope on a day of days for the jockey–in the prestigious Lincoln H. at Doncaster last March.

Sent in mid-September to the GI Woodbine Mile like the owners' prior winner of that contest, Mondialiste (Ire) (Galileo {Ire}), he was a non-threatening sixth there before retreating back into his comfort zone to fill the same position but be just under three lengths off Roaring Lion (Kitten's Joy) in the G1 Queen Elizabeth II S. on Champions Day. Third and ahead of some heavyweights in the G1 Dubai Turf tackling nine furlongs at Meydan Mar. 30, Lord Glitters followed a recent trend of Queen Anne winners by running well below-par in the May 18 G1 Lockinge S. at Newbury, finishing last of the main bunch with only the eased-down Without Parole (GB) (Frankel {GB}) behind.

Drawn widest towards the far rail, he was anchored in last of the pack racing up the centre with One Master alongside as Tudhope and Pierre-Charles Boudot waited on the strong pace to implode. As Laurens (Fr) (Siyouni {Fr}) seized the lead approaching the two-furlong pole, Lord Glitters was being threaded between rivals and with his racing brain duly engaged split that filly and Beat the Bank to enter the thrust of the finish. To his left, Boudot had unleashed Lael Stable's sweet-travelling One Master with a flourish that showed why she had been able to win a G1 Prix de la Foret from an outside draw and for a spell inside the last furlong the race looked hers for keeping. With that merciless stamina-sapping run to the line still to come, the 6-year-old sensed weakness and reeled in the Haggas trainee and fought off old rival Beat the Bank to become the oldest Queen Anne winner since Ardoon (Ire) in 1976.

“Danny gave him a fantastic ride and there was hardly a moment when I didn't feel it was going right,” O'Meara said. “Colm Bolger gets a huge mention, as he rides this horse at home and he can be strong, so it's all come together nicely. He loves the track and in the Lockinge he had no cover and over-raced a touch–he likes to sit last and attack late. When he won the Balmoral here, he had 17 horses in front of him in the last furlong and that is what he likes. He'll follow something similar to last year's program this season. He ran well at Goodwood last year and that [the G1 Sussex S.] is another race you could say he was a touch unlucky in. I must also give a mention to Jason Kelly, my assistant, who bought him in France.”

Trainer Andrew Balding was also reflecting on the Lockinge afterwards, with Beat the Bank improving markedly on a similarly tame effort there when 11th. “I don't know what went wrong at Newbury, but that was more like him,” he said. “These good horses, there's not much between them and they set a good standard. We are keen to try him at a mile and a quarter, so we might look at the [July 6 G1] Eclipse [at Sandown]  if he's all right.”

William Haggas said of One Master, “I'm not sure she quite got home. That's what the jockey thought. She ran a great race, travelled well. She came to win and just flattened out the last bit. I think she stays a mile, but in this competition it's hard to wait any longer with her. While she's got her group one penalty, it's difficult.” Romanised (Ire) (Holy Roman Emperor {Ire}) may be the hard-luck story of the race, being affected by the refusal of Accidental Agent next door as he started tardily and then was held up two out before staying on into fourth.