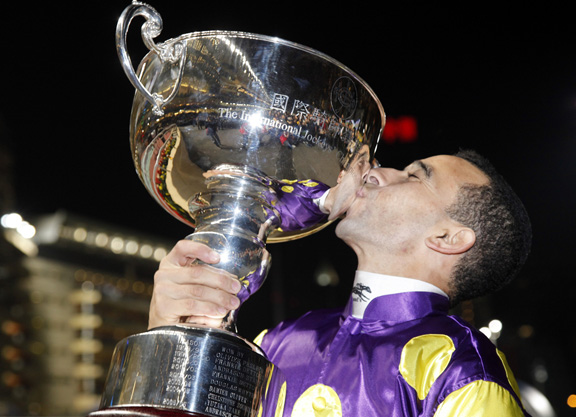 The Longines International Jockeys' Championship, set for Wednesday evening at iconic Happy Valley Racecourse, marks the true start of Hong Kong International Races week, as 12 of the world's top jockey's compete for the HK$500,000 winner's share of the HK$800,000 on offer. Though the crowds won't be there, owing to an uptick in the number of COVID cases over the last few weeks, six locally based riders will face a half-dozen of their peers that have jetted in from Europe, with a revised format in the distribution of mounts that should make for a more level playing field.

Three of the six jockeys that will fly the flag for Hong Kong are past winners of the IJC, including Joao Moreira, who was based in Singapore when he defeated now arch-rival Zac Purton to scoop the top prize in 2012. There is a home-field advantage, the 'Magic Man' believes, but he is taking nothing for granted.

“There's no doubt it's going to be a very interesting jockeys' challenge,” Moreira said. “I have no doubt local jockeys have the advantage of riding every day on the city track, but don't forget these jockeys are coming over here, they are high quality jockeys and they are able to adapt very quickly, understand and pick up from everybody, even watching replays. Luck is going to play a lot of luck in this game.”

Among Moreira's best chances should come in the second leg of the competition aboard Royal Racer (Aus) (Dreamscape {Aus}), whose three career victories have come around the city circuit and who was ridden by Moreira to a course-and-distance success Nov. 25.

Karis Teetan won his first HKIR race in 2018 when steering Mr Stunning (Aus) (Exceed and Excel {Aus}) to victory in the G1 Longines Hong Kong Sprint, and he defeated Ryan Moore to win last year's IJC. The Mauritian is looking forward to defending his title and says his victory put added wind in his sails.

“I would say winning the challenge helped me even in Hong Kong, more owners have seen me on the big stage and trainers have noticed, even now and it's a big challenge and of course to win it was something really special,” said Teetan, currently third in the local jockeys' premiership behind Moreira (49) and Purton (28) with 25 winners.

Moore, who rides Mogul (GB) (Galileo {Ire}) in Sunday's G1 Longines Hong Kong Vase and Magical (Ire) (Galileo {Ire}) in the G1 Longines Hong Kong Cup, looks to add to his 2010 IJC title and is joined by the in-form duo of Tom Marquand and Hollie Doyle. The latter has landed one of the plum rides in any of the four IJC legs, as she was selected at random to guide the David Hayes-trained Harmony N Blessed (Aus) (Magnus {Aus}) in the final race of the series. The 4-year-old led every step of the way to break his maiden at first asking as the $2.50 (3-2) favourite going 1200 metres at Sha Tin Nov. 22.

The Wednesday program at Happy Valley commences at 6.30pm local time (10.30am BST, 5.30am US Eastern time) with the first of the IJC races set to jump at 8.10. Click for the HKJC form guide.