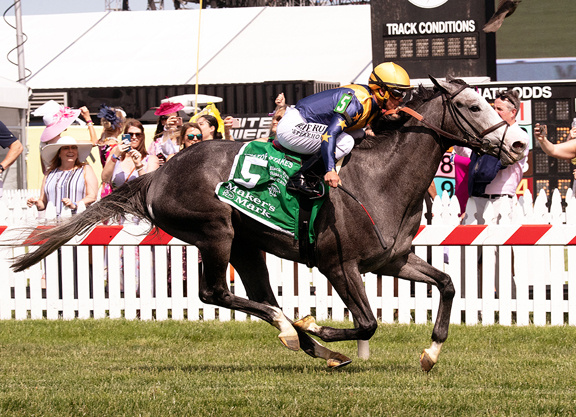 LNJ Foxwoods' sends out a pair of homebreds from two different barns in Luck (Kitten's Joy) and Dogtag (War Front), both of whom have a good chance to secure a spot in the gate for the GI Breeders' Cup F/M Turf next month in Saturday's GI Rodeo Drive S. at Santa Anita. Luck kicked off her career in France for trainer Alain De Royer-Dupre, winning two of four starts going long on the synthetic, including an Apr. 1 allowance. Sixth in her final European start on turf May 8, she was moved Stateside to trainer Richard Baltas and impressed in her U.S. debut, going from last to first in a Del Mar optional claimer Aug. 7, good for a 90 Beyer Speed Figure.

Dogtag will carry the same navy and gold colors, but hails from the Richard Mandella barn. A three-time listed stakes winner, she has been knocking at the door of a graded victory for some time. The gray has been second in her last four starts, including the Aug. 7 GII Yellow Ribbon H. and Sept. 4 GII John C. Mabee S. at Del Mar.

John Mabee winner Going to Vegas (Goldencents) runs back here as well. Runner-up in the GI American Oaks last term, the bay won the GIII Santa Ana S. Mar. 27 and was fifth in the May 31 GI Gamely S., but rebounded with an optional claimer win at Del Mar July 16.

Also exiting the Mabee is Brazilian import Fast Jet Court (Brz) (Courtier), who was making her American bow when fourth in that event.