'Lilac' Back on Top in Queen Elizabeth 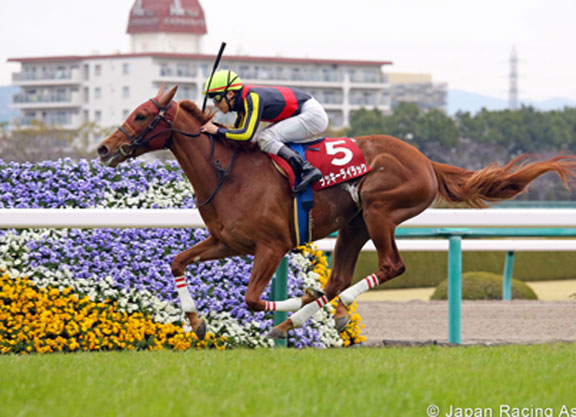 2017 Japanese champion juvenile filly Lucky Lilac (Jpn) (Orfevre {Jpn}) returned to the winner's circle for the first time since her victory in the 2018 G2 Tulip Sho, when winning the G1 Queen Elizabeth Cup by 1 1/4 lengths at Kyoto on Sunday. The daughter of GI Ashland S. victress Lilacs and Lace was made the 5-1 third choice and rallied past pacesetter Crocosmia (Jpn) (Stay Gold {Jpn}) for the score.

She was content to bide her time against the rails in eighth as Crocosmia opened up on the field through a half-mile in :50.30 and a mile in 1:39.50. Christophe Soumillon asked the chestnut for her best 400 metres from home and she burst through up the inside to end her victory drought. Crocosmia clung on tenaciously to second, a neck to the good of favoured Loves Only You (Jpn) (Deep Impact {Jpn}), who was another neck in front of Centelleo (Jpn) (Deep Impact {Jpn}).

“I was very confident when I saw how good she was in training but today she was even better,” said Soumillon, who was winning his first Group 1 in Japan in five years. “She was really concentrating and I saw she was reacting very fast. In the race, I would have preferred to have her another position closer, the pace was not very fast so I thought it would be a little bit hard to make up ground, but finally I took the option to stay in the inside and she really quickened well and at the 200-meter marker when I saw the gap was still open I was confident that I had won.”

A winner of the G1 Hanshin Juvenile Fillies at two and then a winner of the Tulip Sho in her 3-year-old bow, Lucky Lilac then had the misfortune to run into ascending superstar Almond Eye (Jpn) (Lord Kanaloa {Jpn}). She was second and third to that foe in the G1 Oka Sho (Japanese 1000 Guineas) and G1 Yushun Himba (Japanese Oaks), respectively last spring. Facing off against that subsequent Horse of the Year in the G1 Shuka Sho, she failed to stay and was ninth, before being shelved for the remainder of 2018. She returned with a second-place effort in the Feb. 24 G2 Nakayama Kinen and, after two more unplaced runs, was third last time in the Oct. 14 G2 Ireland Trophy Fuchu Himba S.

Lucky Lilac is one of two Group 1 winners for her sire, who also has Epoca d'Oro (Jpn). Out of GISW Lilacs and Lace, Lucky Lilac is one of three winners for her dam. Japanese champion older mare Diamond Biko (Jpn) (Sunday Silence) is a half-sister to Lucky Lilac's second dam Refinement (Seattle Slew), the duo daughters of four-time Grade I winner Stella Madrid (Alydar). The Queen Elizabeth Cup victress's fourth dam is American champion sprinter My Juliet (Gallant Romeo).