Lightning And Thunder At Meydan 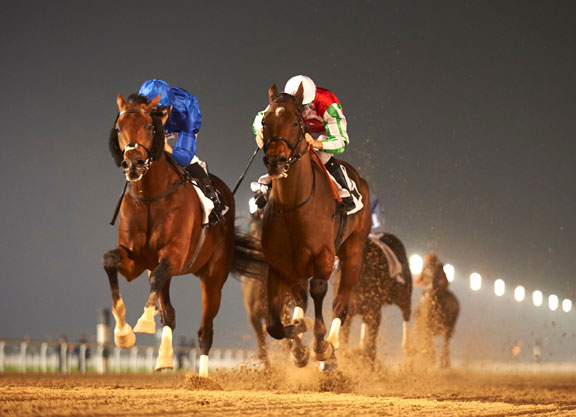 Thunder Snow, a distant second first-up to Heavy Metal (GB) (Exceed and Excel {Aus}) in the G2 Al Maktoum Challenge Round 1 on Jan. 11, was kept three wide and out of trouble by Christophe Soumillon while lying much closer to the pace this time, which was set by North America (GB) (Dubawi {Ire}), with Heavy Metal splitting them. Put to a drive turning for home, Thunder Snow used the length of the stretch to grind down the lead of North America and hit the line a neck the best, with Heavy Metal fading late but hanging on for third from last year's winner Furia Cruzada (Chi) (Newfoundland).

“Basically, I think he was the best horse in the race and I rode him accordingly,” Soumillon said. “His stamina was never an issue, whereas the other pair are quick horses who had more early speed. My horse actually wanted to go after them earlier in the back straight, but I was happy to take my time and wait until the home straight. He then won well in the style of a good horse. I actually said to Saeed he gives me a better, more natural feel, on turf whereas, on dirt, I think his class gets him home.”

After Winter Lightning had won earlier on the card, the Darley-bred Eastern Joy has now produced five stakes winners from five foals of racing age. The first of those was Ihtimal (Ire) (Shamardal), who also excelled on this track, albeit on the all-weather, when taking the G3 UAE Oaks and Listed UAE 1000 Guineas, and who, like her half-brother, was also good on the turf, winning the G2 May Hill S. and G3 Sweet Solera S. and finishing third in the G1 1000 Guineas and G1 Fillies' Mile. The mare's second foal, Always Smile (Ire) (Cape Cross {Ire}), was a listed winner and second in the G1 Sun Chariot S., while First Victory (Ire) (Teofilo {Ire}) took the G3 Oh So Sharp S. Thunder Snow is the first colt out of Eastern Joy, but she has another to come in a yearling son of Dubawi (Ire).

A glance at the pedigree shows it is no surprise that Eastern Joy has excelled in her second career; while she was herself just a minor winner in France, there is class sprinkled across the page. She is a daughter of Red Slippers (Nureyev), winner of the Sun Chariot S. when it was a Group 2, and who produced the G1 Prix de Diane winner West Wind (GB) (Machiavellian). Red Slippers is a half-sister to that classy mare Balanchine (Storm Bird), winner of the G1 Irish Derby and G1 Irish Oaks. Click for the free Equineline.com catalogue-style pedigree.