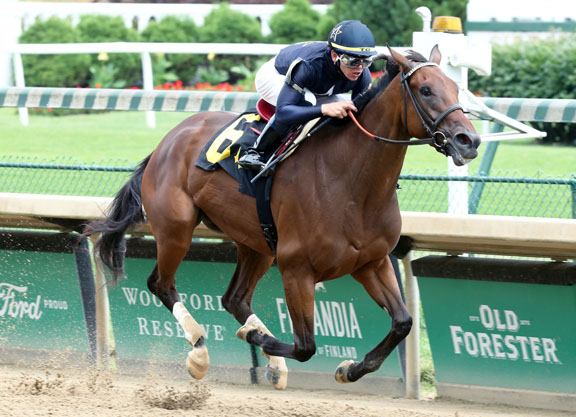 While two-time GSW Tonalist's Shape (Tonalist) is favored at 9-5 on the morning line for Saturday's GI Coaching Club American Oaks at Saratoga, she'll have to fend off several well-bred and promising up-and-comers if she's to get the job done.

Perhaps the most formidable challenger is WinStar Stablemates Racing's Paris Lights (Curlin). The Bill Mott trainee was third in a sloppy-track sprint at Gulfstream on debut Apr. 26, but took a big step forward to romp on the stretch-out at Churchill May 31 and then paired up 85 Beyer Speed Figures when taking a first-level allowance June 27 in similarly facile fashion. That 85 Beyer is the field's best last-out number and is only eclipsed by an 89 and 87 earned by Tonalist's shape several starts back. Mott, who won this race in 1997 with Ajina, will also saddle Godolphin's versatile GII Fair Grounds Oaks and GIII Wonder Again S. third Antoinette (Hard Spun).

Crystal Ball (Malibu Moon) also carries the WinStar Stablemates silks and was third in her debut, going a mile at Santa Anita May 17 for Bob Baffert. The $750,000 Fasig-Tipton Gulfrstream grad aired by 6 1/4 lengths on the stretch-out June  14. Baffert took the 2017 CCA Oaks by a head over Mott-trained Elate (Medaglia d'Oro).

The Chad Brown stable took the GIII Peter Pan S. for sophomore boys with Country Grammer (Tonalist) on opening day, and could double up with Altaf (Medaglia d'Oro) here. The Shadwell homebred was just seventh in her grassy unveiling in Florida Apr. 2, but uncorked a visually impressive sweeping rally to don cap and gown by 6 1/2 lengths under the Twin Spires May 23.