Lighting the Torch at Royal Ascot 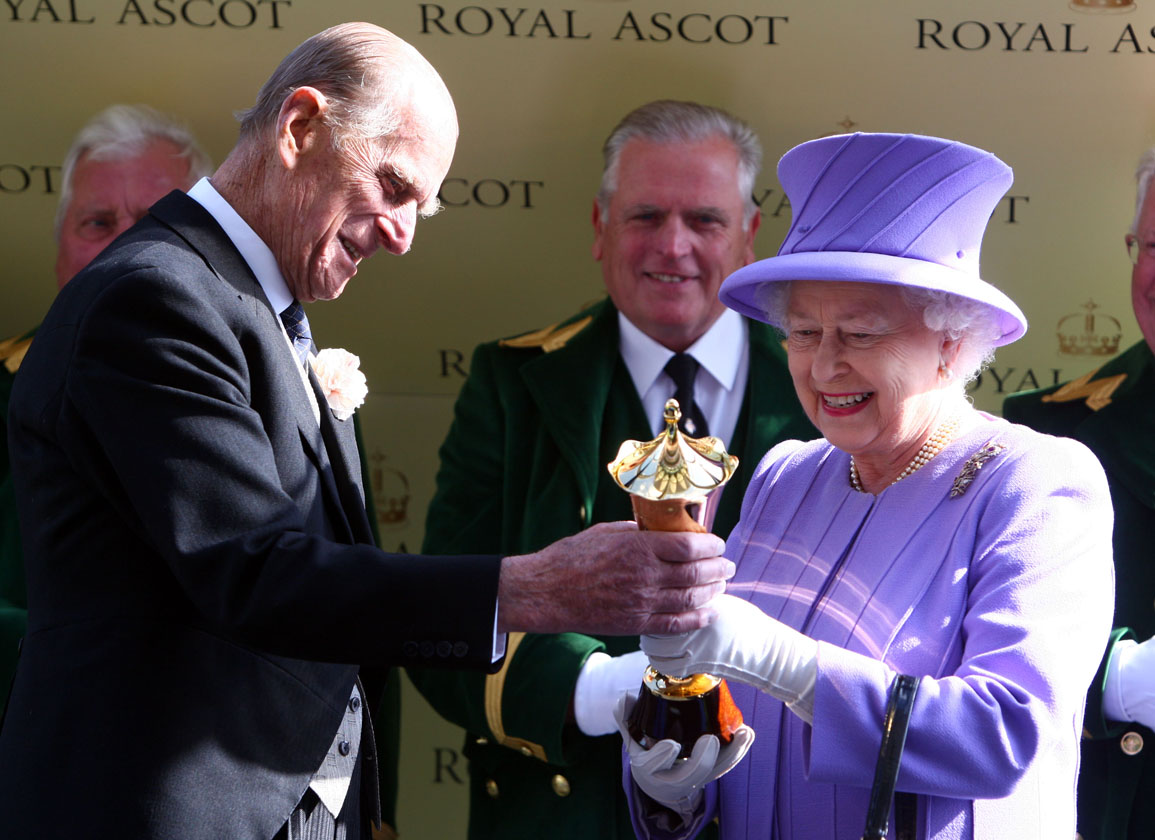 The Queen being presented the Queen's Vase by the late Duke of Edinburgh | focusonracing.com

Charlie Appleby calls it “the Olympics” and few would challenge that claim. Royal Ascot has been too long enmeshed in the fabric of British culture to be anything other than a truly special occasion, but in the Platinum Jubilee year it has even greater allure, a higher purpose. Four of the top nine horses in the World's Best Racehorse Rankings, including the one who sits atop, will be here this week and several more that have yet to reveal themselves as members of that exclusive club. We will know them all by the end of Saturday, but before then all the currently unknown scenarios will go through this meeting's glorious process of exposure and development. There will be formalities, probably as soon as the very first race, but also surprises and the whole range in between as the pick of the Thoroughbred population are at stretch over this hallowed land. All ages, both sexes, several nations, all racing styles. There will be time to marvel at rapidity of the fast-twitch kind, at the long-drawn-out sagas of the staying races, the dynamic poise of the milers and life at the cutting edge for the middle-distance maestros. There is a leading Australian sprinter, an ingredient much missed at the meeting in recent times, the now-customary U.S. contingent and the normal heavy representation from Europe's major operations both entrenched and newly-formed but with the same appetite.

Reach For the Stars

With temperatures set to soar and freedom of movement fully restored, the pinnacle of the English racing scene is back where it belongs in the public consciousness. Of course, where that is concerned the key event could actually come on Thursday with Reach For the Moon (GB) (Sea the Stars {Ire}) who is much the most likely source of The Queen's 25th Royal Ascot winner in the G3 Hampton Court S. It is fair to say that without a success in those colours the week will have a hole in it, whatever the achievements of Baaeed (GB) (Sea the Stars {Ire}), Nature Strip (Aus) (Nicconi {Aus}), Coroebus (Ire) (Dubawi {Ire}), Bay Bridge (GB) (New Bay {GB}) and Stradivarius (Ire) (Sea the Stars {Ire}), so it is in the lap of the gods as to how that plays out. In the final analysis, The Queen has long proven her ability to deal with reversals and her appreciation of the week's parade of luminaries runs deep enough to counter any personal disappointments.

If it is to be the perfect week, then surely there can only be one outcome to the opening G1 Queen Anne S. and that will be Baaeed's private eulogy delivered to his late owner-breeder Sheikh Hamdan. With little in the way of threatening opposition on Tuesday, the key factor will be how far the forecast 1-5 shot can put himself out of reach in the World Rankings and how much he can bridge the still-sizeable gap to Frankel's elevated level. When horses get this far in advance of their peers, they are in some ways racing their own ghosts and with normal improvement from Newbury's G1 Lockinge S. May 14 he looks to put the fear into the crop of 3-year-olds looking for a potential fight in next month's G1 Sussex S. Fittingly, Baaeed's heritage goes back to The Queen's Height of Fashion (Fr) (Bustino {GB}), the remarkable fount of such glory for Shadwell Estate following the transaction between the ruling monarch and the Maktoum family kingpin back in the 1980s.

After Baaeed there are just two other Somerville Lodge representatives on day one, but they are a potentially formidable duo in their own right in Sunderland Holding's May 19 Listed Heron S. winner My Prospero (Ire) (Iffraaj {GB}) and Sheikh Ahmed Al Maktoum's May 22 G2 Mehl-Mulhens-Rennen (German 2000 Guineas) winner Maljoom (Ire) (Caravaggio) in the G1 St James's Palace S. The former would be providing his owners with a breakthrough Royal Ascot winner if he can get to Godolphin's 2000 Guineas hero Coroebus and there was much to like about the way he subdued Reach For the Moon at Sandown in a race that is becoming increasingly important as a stepping stone to this prestige event. Without Parole (GB) (Frankel {GB}) took the Heron in 2018 before annexing this, while a year later King of Comedy (Ire) (Kingman {GB}) narrowly missed out on the double. He is drawn on the verges of acceptability in seven, with the last nine winners housed either in that stall or lower, whereas Maljoom has stall eight but is a habitual slow-starter so was unlikely to gain any advantage drawn towards the rail. He is a strong-finisher, however, as he proved in Cologne and it would be a huge shot in the arm for the German Classic if he is to overturn the English Guineas winner here. The form that the Haggas stable is in at present, it couldn't be written off. “They are two improving young three-year-olds and it's a very prestigious race, so they are entitled to have a shot,” their trainer said. “They've got a lot to find to beat Coroebus, but they are going the right way. Maljoom would be the faster of the pair, but My Prospero will stay well.”

Royal Ascot's metamorphosis from its rather staid past format into the up-to-date celebration of versatility it is now was helped in large part by the arrival of the sprinting megalith Choisir (Aus) back in 2003 and by the onslaught of Wesley Ward's raiders from 2009 onwards. Internationalisation really took hold of racing from the end of the last century and there is no way back from here, so it is apt that the G1 King's Stand S. boils down to an Australia-US drag race. Ward has placed Golden Pal (Uncle Mo) on a pedestal and he has been gifted a favourable high draw in 13 and a slick surface not always a guarantee at this meeting in recent times. Irad Ortiz is charged with getting the minutiae of pace-setting dead right and perhaps his best chance is if he can stay out of range of the Australian slugger Nature Strip. His is the direct line to glory and he has to not falter, as he did in York's G1 Nunthorpe S. in August. “He's a fast horse, so he's going to break like he always does and we'll just try not to go too fast early,” Ward said. “Whether it was Irad or Frankie Dettori or Lester Piggott on this horse, it's just a question of easing him back after the break and for the first three eighths you just want to go as easy as possible because whoever is going to be up there with him is going to pay the price. The thing about bringing Irad over here to ride this particular horse is he knows the horse very, very well and the horse responds well to him–they're undefeated.”

And It's No Nay Never

From the end of the last century, Royal Ascot has played regular host to some big names with dirt pedigrees and there is something in the turf that seems to sit well with the Storm Cat sire line. Through the 2001 G3 Norfolk S. winner Johannesburg, to Scat Daddy's No Nay Never, Caravaggio, Lady Aurelia, Sioux Nation and Acapulco, the meeting has come to represent something of a target for outrageously precocious juveniles with a power edge over their generation. No Nay Never's 2013 success in the Norfolk, when it was a group 2 as it is now, was won the hard way and he is a sire of precious material that Coolmore have profound belief in. At this stage of the 2022 season, he accounts for a ream of early Ballydoyle winners and Blackbeard (Ire) is front and centre as he spearheads the stable's quest for a 10th renewal of the G2 Coventry S. His 3 1/2-length dismissal of Moyglare's classy Tough Talk (Ire) (Kingman {GB}) in The Curragh's G3 Marble Hill S. May 21 is a standard-setting piece of form and with a draw in 14 he will be hard to subdue. “He is very professional and exciting in equal measure,” Ryan Moore stated on his betfair blog.

All the Right Amo

Kia Joorabchian's Amo Racing operation has been a notable fast starter with the 2-year-olds in 2022 and the Coventry sees Persian Force (Ire) (Mehmas {Ire}) kick off a potentially big Royal Ascot week for the relatively new enterprise. Successful in Doncaster's Brocklesby on the first day of the flat season in Britain Mar. 26 before adding a Newbury conditions race to his tally on the Lockinge card May 14, he has had Richard Hannon in typically excitable form of late. Amo's racing manager Emily Scott is keen to take a step back from the hype now. “He goes there with a great chance. I think the horse has got to do the talking now, but it's going to be very exciting,” she said. “We do have a few chances each day this week, but he is certainly the one we're taking there with highest expectations, I would say.”

Often one of the meeting's most intriguing contests, the Coventry provides the first real test for the leading progeny of the first-season sires who have shaped the initial juvenile scene and none have made a mark so profound as Whitsbury Manor Stud's Havana Grey (GB). His Andrew Balding-trained colt Holguin (GB) is a longshot, having been beaten convincingly by Persian Force at Newbury, but much shorter in the betting is another member of a first crop in Victorious Racing Limited's Bradsell (GB) (Tasleet {GB}). Earning TDN Rising Star status with a nine-length success in a York novice over this six-furlong trip May 21, the son of Shadwell's Nunnery Stud resident takes high rank among Archie Watson's youngbloods, while Dalham Hall Stud's Harry Angel (Ire) has Michael O'Callaghan's deeply promising May 14 Navan maiden scorer Harry Time (Ire). As far as Sioux Nation is concerned, it's safe to say that there will be stronger chances for Coolmore's aforementioned freshman than the 100-1 maiden Lakota Blue (GB) as the week goes on.