Life Is Good Prepares for Pegasus 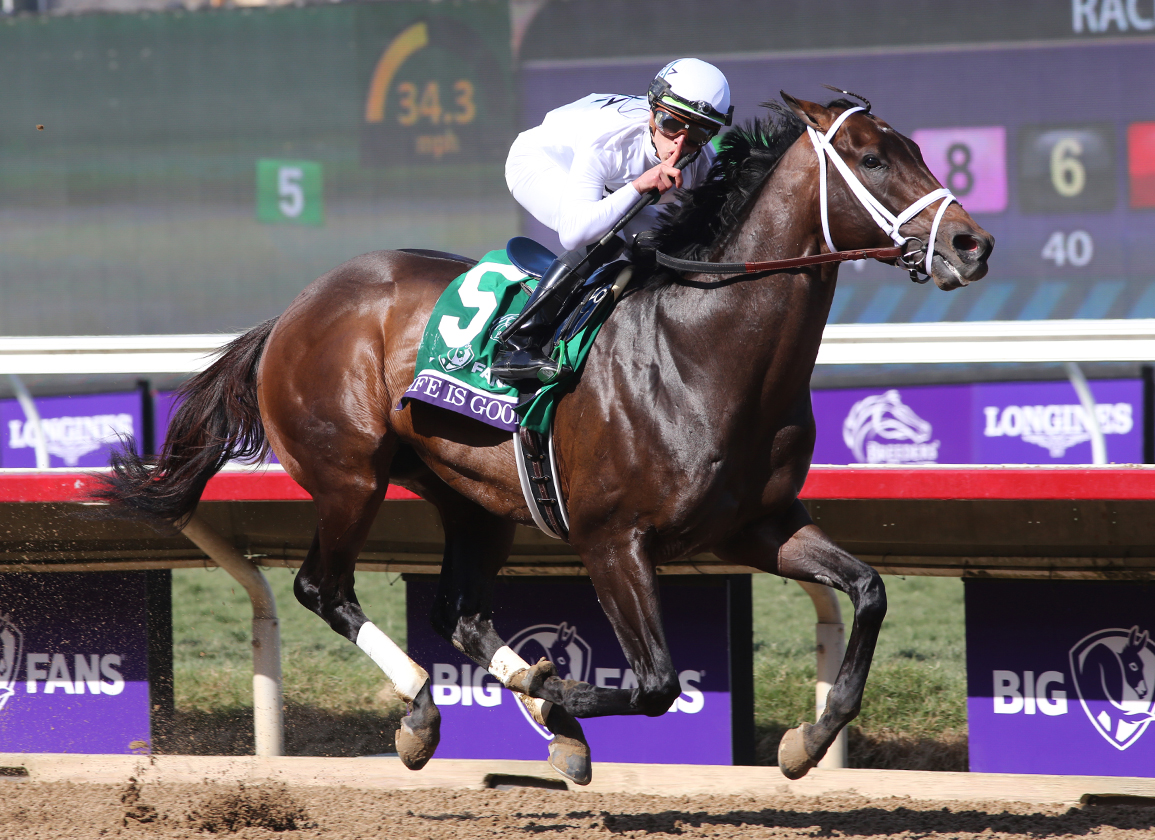 WinStar Farm and CHC Inc.'s TDN Rising Star Life Is Good (Into Mischief) posted another sharp work Saturday morning as he readies for his next scheduled start in the GI Pegasus World Cup Invitational at Gulfstream Jan. 29.

The 4-year-old breezed five furlongs in 1:00.36 at Palm Beach Downs for Todd Pletcher, third-fastest of 14 horses at the distance Saturday.

“Just another super work this morning,” said the Hall of Famer of the 3-year-old Eclipse finalist. “Looked awesome, finished up really strong, galloped out great. Looks good here [Saturday] afternoon. We're very, very happy with him. I had him in a minute and 2/5, had him shading :23 the last quarter. He galloped out seven-eighths in 1:26 2/5 and just looked great doing it.”

Earning a Rising Star badge following his 9 1/2-length victory for Bob Baffert in his sole start of 2020, he won his next two to kick off his sophomore season in the GIII Sham S. and GII San Felipe S. Runner-up to Jackie's Warrior (Maclean's Music) in his first start for Pletcher in the Aug. 28 GI H. Allen Jerkens Memorial S., the bay galloped in the GII Kelso H. before airing on Breeders' Cup Day.

“I love the way he's settled in here. He's been really training well, but also a little more relaxed,” Pletcher said. “I think he likes the environment at Palm Beach Downs. We kind of take him out when he's the only horse on the racetrack, so he's enjoying that.”

He added, “His works, he couldn't work any better, but he's always been such an exceptional work horse that I guess anything other than exceptional would be concerning. He seems to be every bit as good or better than he was going into the Breeders' Cup.”

Also slated to run on the Pegasus card, Robert and Lawana Low's Colonel Liam (Liam's Map), who prepares to defend his title in the GI Pegasus World Cup Turf Invitational, exited his five-furlong breeze in 1:00.23 at Palm Beach Downs Friday in fine form. Friday's move was the fastest of 11 horses.

“I am very pleased,” he said. “It looks like he's coming up to it in good order. One more breeze to go, but all systems go.”