Let’s Make the Maximum of What We Have 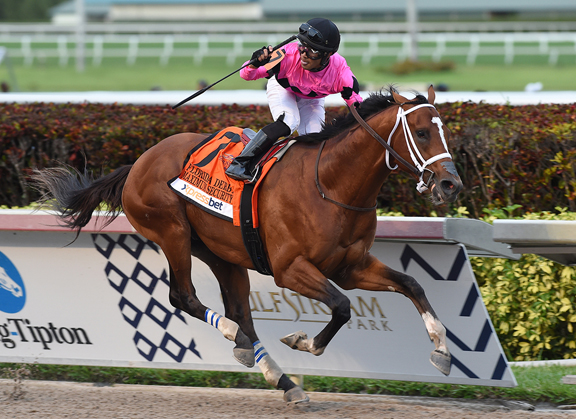 How innocent we all were, in hindsight. Maybe you, like me, were in town from colder climes; feeling your whole soul opening, flower-like, to the unaccustomed warmth of the Miami springtime.

From the upper arcade I gazed superciliously at Maximum Security (New Year’s Day) as he strolled round the parade ring. The hometown upstart had won three sprints by an aggregate 35 lengths, but you could have claimed him for $16,000 on his debut. Yes, everyone cautioned that Jason Servis, at a 45% clip through the meet, could do unexpected things with a horse; but surely this blue-collar speedball wouldn’t have the impudence to last nine furlongs better than the princely Juddmonte homebred, Hidden Scroll (Hard Spun).

The rest, as they say, is history. Except it’s not. Not by a long chalk.

Most obviously, the chapters still to be written include a criminal case against Servis, along with all the others caught up in the same investigation. Whatever the outcome, Maximum Security has plainly become a still more complicated name, in the annals of the sport, than when his rider was found guilty of a far more trivial charge, in the GI Kentucky Derby, than the one now levelled at his trainer.

Even that reflection, however, does not begin to measure the transformation in our world since his arrival in the elite at Gulfstream a year ago. The stands, then teeming with carefree idlers in seaside shirts and summer frocks, now loom over the track in echoing silence; and a positive coronavirus test, for one of the top jockeys heading into town, left the whole program hanging by a horsehair.

Even then, admittedly, we were already deeply careworn: wondering whether the traumas of Santa Anita had the makings of an existential challenge. And many, moreover, soon felt as much sympathy as satisfaction for Bill Mott–the very man disappointed by Hidden Scroll–after another colt in his barn went on to secure the prize he so craved and deserved, but only by dint of a stewarding controversy.

But if 2019 seemed a dispiriting year, what would we all give now to be back in the shoes (or sandals) we wore that day at Hallandale Beach?

Jimmy Crupi had just completed the last triumph of his extraordinary career, securing the top price of Fasig-Tipton’s juvenile sale with a $3.65-million Curlin colt. Introduced by our mutual friend, the charming Dr. Paolo Romanelli, I offered Crupi due congratulations; and promised that next time we should sit down together for an interview. Just weeks later, of course, Crupi finally yielded in his prolonged and immensely brave battle with ill-health.

As painful a reminder as any, for his many friends in the business, that we should never be complacent in the daily stimulations of our community–whether found in the company of its horses, or its horsemen.

So while a sense of foreboding is natural, as our wagons circle ever tighter against the virus, let’s try to take the longer view. This, too, shall pass. In years to come, all the ambivalence associated with the 2019 winner will be redressed by gratitude that the Stronach Group provided a top-class colt with the necessary duckboards, across the no-man’s-land of this terrible crisis, to win the 2020 Florida Derby.

Needless to say, the race is a very different proposition this time round. In three of the past four runnings, it proved the perfect springboard for a sophomore with the mental and physical package to finish first past the post in a 20-runner stampede over 10 furlongs on the first Saturday in May. With the postponement to September of the Kentucky Derby–inviting all the slow-burning Travers types into the equation, and playing havoc with the summer calendar–we must value this race, more than ever, as an end in itself. Because the demands it has always made, of maturing horses, have made the Florida Derby a consistently reliable signpost to stud success.

From Nashua in the 50s and Northern Dancer in the 60s, the baton has been passed to more recent names as resonant as Unbridled, his son Unbridled’s Song, Empire Maker, Scat Daddy and Quality Road.

Scat Daddy, in 2007, was the first of a record five winners saddled by Todd Pletcher. The other four were clustered in just five runnings between 2014 and 2018, highlighted by subsequent Kentucky Derby winner Always Dreaming (Bodemeister), himself a graduate of Crupi’s New Castle Farm.

But it is the horse who initiated that streak on only his third start, Constitution (Tapit), who bestrides today’s race. It would be difficult, in fact, to overstate its importance in extending the remarkable start he has made to his second career. Of the first four on the morning line, three are sons of Constitution.

Remember that the only stallions on WinStar’s 19-strong roster still matching or surpassing the young gun’s new fee of $40,000 are More Than Ready, who is now 23; Speightstown, 22; Distorted Humor, the venerable damsire of Constitution, 27; and Tiznow, 23. That’s how unbearably cruel was the loss of Pioneerof the Nile, in his pomp; and how vital is the farm’s next wave of young stallions, with their brilliant standard-bearer.

As it happens, two of the three Constitutions converging on this crossroads first publicized their wares over the same track in the Fasig-Tipton Sale last year. Actually Independence Hall failed to meet his reserve, at $200,000, but Gouverneur Morris made three times that sum.

The other Constitution, favorite Tiz The Law, was a $110,000 Saratoga yearling. But he’s the only one with a race round here already under his belt–and what a race it was, too, taking Ete Indien (Summer Front) miles clear of the rest in the GIII Holy Bull S. The runner-up reopposes, however, having progressed again to blitz his pursuers in the GII Fountain Of Youth S., and will have no mercy on Tiz The Law (who has needed some time out since, with a foot bruise) and Independence Hall after their breaks; or on the relatively raw Gouverneur Morris.

It has been fascinating to see Biancone, relishing his return to the big time, dextrously working a bed of stamina into Ete Indien. Of course, the Frenchman has another string to his bow in Sole Volante (Karakontie {Jpn}), who still looked potentially the crop’s most potent closer when second in the GII Tampa Bay Derby. Certainly it was no disgrace for Independence Hall to forfeit his unbeaten record to Sole Volante in the GIII Sam F. Davis S., having been nakedly exposed to hot fractions and also lost a shoe.

That just looked like a learning experience all round for Independence Hall. Which, essentially, is exactly what we have all had over the last year. There are more lessons to come, no doubt, and some of them may be bitter. As things stand, however, we should not just be grateful for the precarious entertainment still available to us today. With our vigilance renewed, whether against malpractice or sheer misfortune, we must also vow always to cherish and protect the renewal of those rituals we previously took for granted.