Letruska Hangs On in Personal Ensign 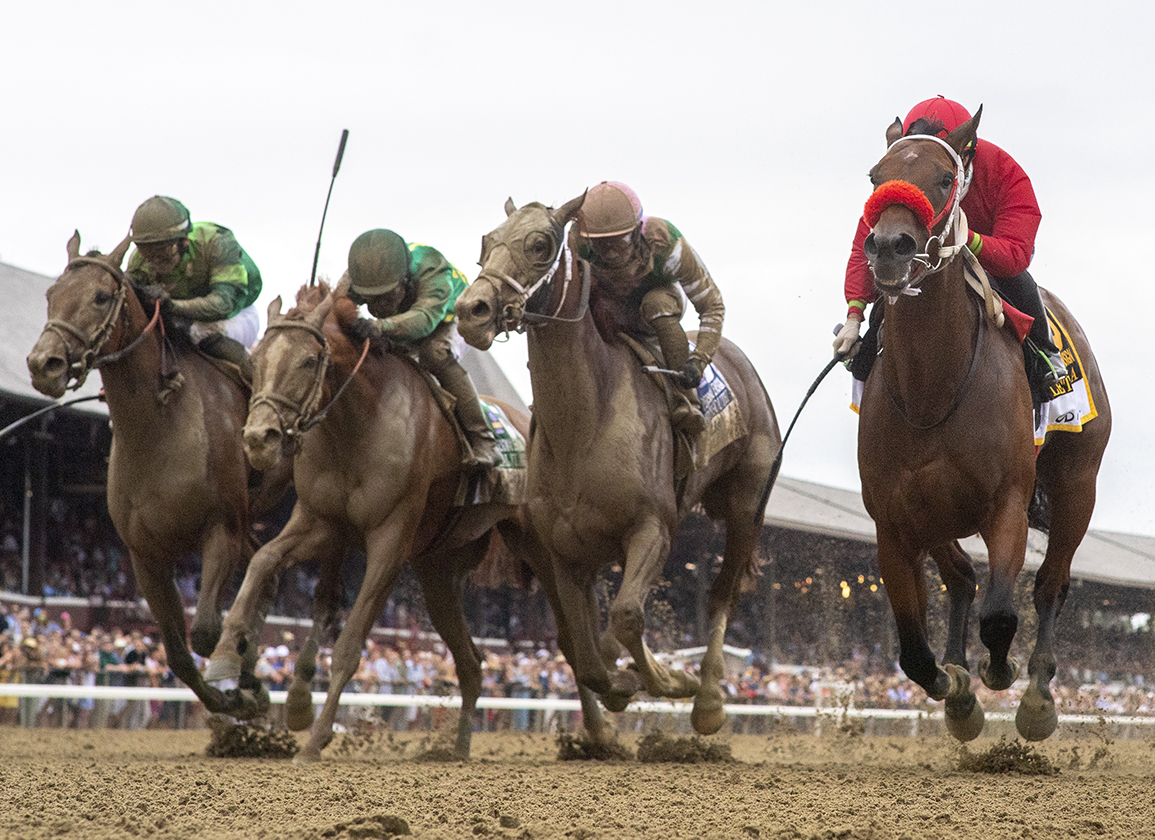 Letruska (Super Saver) continued her domination of the distaff division with determined triumph in Saratoga's GI Personal Ensign S. Saturday, a “Win and You're in” for the GI Breeders' Cup Distaff at Del Mar in November. Favored at 3-5 to score her fourth straight win, the bay rushed up challenge champion Swiss Skydiver (Daredevil), who broke like a shot and was hustled away from the stalls by her pilot Jose Ortiz. His elder brother Irad Ortiz charged past the chalk exiting the first turn and Swiss Skydiver settled back in third as GII Delaware H. victress Miss Marissa (He's Had Enough) moved up to press Letruska through a :23.01 opening quarter and :46.74 half-mile. Miss Marissa called it quits at that point and Harvey's Lil Goil (American Pharoah), a Grade I winner on turf, charged up to pressure the pacesetter through three-quarters in 1:10.76.

Turning for home in front, Letruska was immediately confronted by Swiss Skydiver to her inside as Harvey's Lil Goil threw in the towel on the outside and MGSW Bonny South (Munnings) ranged up to take her place. Swiss Skydiver grew leg weary at the sixteenth-pole, but Bonny South continued to box on with GIII Shuvee H. winner Royal Flag (Candy Ride {Arg}) glued to her outside and Dunbar Road (Quality Road) rallying strongly out in the four path. Letruska kept on finding in deep stretch, digging deep to out-foot her foes for an half-length success. Bonny South held second by a head over Royal Flag and it was just another head back to Dunbar Road in fourth.

“I had concerns when they were running at her because these are very good horses and they are in good form,” said winning trainer Fausto Gutierrez, who indicated Letruska would have her final Breeders' Cup prep in Keeneland's GI Juddmonte Spinster S. “I'm very pleased with the way she ran. Every place that she's run, with all the horses she's run against. She's fast, she fights and she's a real racehorse. She has ability, but more she has a big heart. This a special horse.”

Irad Ortiz echoed Gutierrez's sentiments, saying, “She's a special horse. I am very excited and happy for the trainer, Fausto Gutierrez. He's done such a great job with her. She's doing great. She does all the hard work, I just pilot her. She's easy to ride.”

Winner of the Shuvee at this venue last year, Letruska kicked off 2021 with a decisive score in the GIII Houston Ladies Classic S. Jan. 31 and came up a head short of last term's GI Kentucky Oaks heroine Shedaresthedevil (Daredevil) in Oaklawn's GII Azeri S. Mar. 13. Letruska stamped herself as the one to watch this season when besting champions Monomoy Girl (Tapizar) and Swiss Skydiver with a narrow win in the GI Apple Blossom H. in Hot Springs Apr. 17. Defeating Bonny South by 2 3/4 lengths in Belmont's GI Ogden Phipps S. June 5, the bay romped in Churchill's GII Fleur de Lis H. last out June 26.

Letruska is one of six Grade I winners for the expatriated Super Saver and one of 14 graded scorers for that GI Kentucky Derby winner. The winner's dam Magic Appeal (Successful Appeal), who finished third in this venue's GII Adirondack S., is also the dam of MSW & GISP Trigger Warning (Candy Ride {Arg}) and SP American Doll (Tiznow). The full-sister to J P's Gusto is also responsible for the unraced juvenile colt Ocotzingo (Hard Spun), a yearling colt by the late champion Arrogate and a 2021 filly by the late Malibu Moon. Magic Appeak was bred back to Curlin. Letruska hails from the family of American champion Proud Spell (Proud Citizen) and Canadian champion Miss Mischief (Into Mischief).

This story was posted in Top News and tagged Breeders' Cup Win and You're In, Fausto Gutierrez, Letruska, Personal Ensign, Saratoga, Super Saver.