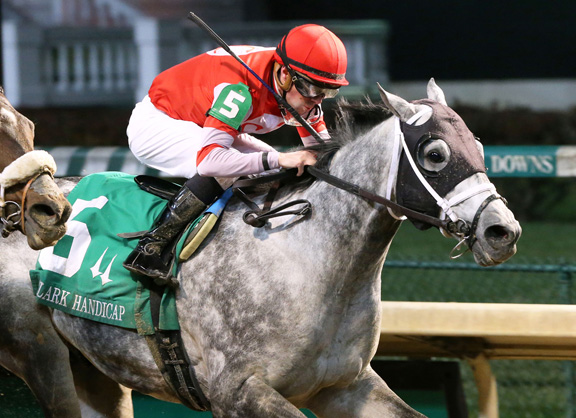 Leofric (Candy Ride {Arg}–Lady Godiva by Unbridled's Song), winner of the 2018 GI Clark H. at Churchill Downs in his career finale, will stand his first season at stud as the property of a syndicate at Rockridge Stud in Hudson, New York.

Originally a $330,000 KEESEP yearling purchase, he was aquired by Steve Landers for $100,000 as a horse of racing age at the 2016 KEENOV Sale. The gray also has wins in last term's GII Hagyard Fayette S. and GIII West Virginia Governor's S. and a third-place finish in the GI Woodward S. on his resume.

Bred in Kentucky by Peter E. Blum Thoroughbreds, Leofric retires with a record of 14-8-1-3 and earnings of $951,040. He was produced by the unraced Unbridled's Song mare Lady Godiva, a half-sister to MGSW Multiple Choice (Mt. Livermore). This is the extended female family of GISWs Well Chosen (Deputy Minister) and Telling (A.P. Indy).