Lea Gets Second Winner at the Spa 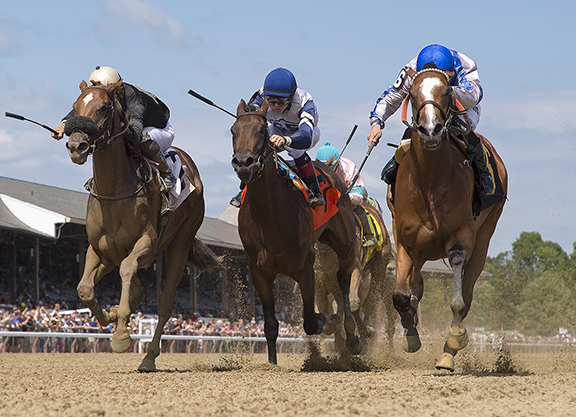 VAST (f, 2, Lea–Enth, by Seeking the Gold) became the second winner for her freshman sire (by First Samurai) when she gamely prevailed in her career debut at the Spa. Dismissed at odds of 12-1, the homebred burst out of the barrier and vied for the early lead with Pure Wow (The Factor) through a first quarter in :22.67. Hugging the rail around the turn, she appeared to be momentarily defeated before digging in and finding another gear into the lane. The bay came out and brushed with a rival  inside the eighth pole before being straightened out by her rider Junior Alvarado, driving to the wire to finish a half-length in front of a closing Good Shabbs (Munnings). Hailing from the family of GI Breeders Cup Classic winner Blame (Arch), Vast is a half-sister to Sower (Flatter), MSW/MGSP, $299,890 and a yearling filly by Runhappy. Lifetime Record: 1-1-0-0, $49,500. Click for the Equibase.com chart or VIDEO, sponsored by Fasig-Tipton.