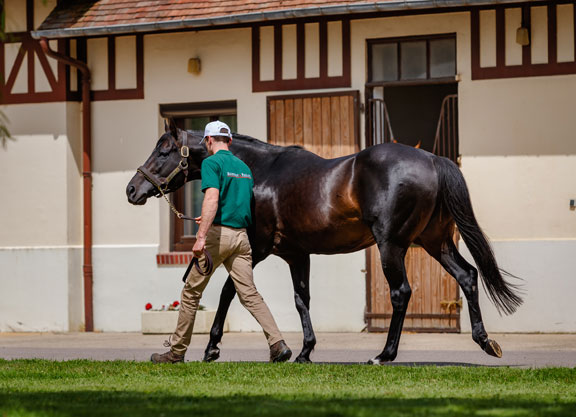 With enough evidence in the books for this year's European flat turf season to begin analyzing sire performance, we're faced with some predictable trends, while others are a little more surprising.

Predictable: Galileo retains his spot atop the general sire list by European and North American earnings, a position he has yet to relinquish since 2010. He is trailed by almost £800,000 in earnings by Shamardal, who likewise stands for a private fee at Darley's Kildangan Stud, and Irish National Stud linchpin Invincible Spirit, who is making his €120,000 covering fee look rather reasonable in light of the incredibly good fortune being enjoyed by himself and his sire sons like Kingman (GB) and I Am Invincible (Aus).

A less likely face in the top five is France's Le Havre (Ire), who sits about £14,000 off Invincible Spirit in fourth. Moreover, had the nose decision of Shamardal's Castle Lady (Ire) and Le Havre's Commes (Fr) in last Sunday's G1 Poule d'Essai des Pouliches gone the opposite way, Le Havre would currently be occupying second.

Pondering such 'what ifs' is time wasted, however, and Le Havre looks to have plenty to go to bat with this summer, first and foremost the stoutly bred Commes herself, who trainer Jean-Claude Rouget “without hesitation” committed to the G1 Prix de Diane in the immediate aftermath of the Pouliches. Le Havre also has a pair of live contenders for the June 2 G1 Prix du Jockey Club in the last-out G2 Prix Greffulhe victor Roman Candle (GB) and Motamarris (Ire). The unbeaten Motamarris is 10-1 for the Chantilly Classic despite never having run in a stakes race, so impressive was his eight-length conditions win over the French Derby course and distance on May 11.

Le Havre has sired nine stakes winners thus far in 2019, equal to Galileo and, remarkably, already exceeding his 2018 total of six. And while such trends in stallion performance can sometimes be difficult to quantify, Le Havre's ascension could be attributed to the fact that this year's 3-year-olds are his first bred on a five-figure fee.

Le Havre, a son of the nondescript Noverre and out of Marie Rheinberg (Ger) (Sukaro {Ger}), an unraced half-sister to Pivotal (GB)'s sire-and Group 1-winning sprinter–Polar Falcon (Nureyev), was a €100,000 yearling and one of the first horses purchased by Gerard Augustin-Normand-who named the colt after his hometown–when he began to seriously invest in yearlings in 2007. Noverre, a sharp 2-year-old who trained on to be placed in some of Europe's best mile races, was sold to India by Darley while his first crop was three, just months after Le Havre had passed through the ring at Arqana. Noverre did in fact go on to make an impact with his few crops left behind in Europe; Le Havre, with his Prix du Jockey Club win, was the stallion's first top-level winner, and his next crop contained three: the Falmouth winner Music Show (Ire), Beverly D. victress I'm A Dreamer (Ire) and G1 Prix de Diane winner Enora (Ger). Noverre has also done respectfully as a broodmare sire, having sired the dams of Group 1 winners Dylan Mouth (Ire) and Under the Louvre (Aus) as well as last year's G2 Prix Royallieu winner Princess Yaiza (Ire).

But, back to Le Havre. The dark bay made a promising start to his racing career at two, winning at first asking in August at Clairefontaine before adding a Saint-Cloud conditions race. He was seventh, albeit beaten just 2 3/4 lengths, in the G1 Criterium International to round out the season. After starting out at three with a win in the Listed Prix Djebel, Le Havre was second in the Poule d'Essai des Poulains after a luckless trip before redeeming himself in the Jockey Club. Sadly, a tendon injury just weeks later put halt to the ascendant colt's racing career, and he retired prematurely to Haras de la Cauviniere (now Haras de Montfort & Preaux), becoming the foundation stallion there, in 2010 for a fee of €5,000.

Le Havre's first-crop 2-year-olds in 2013 numbered 99 foals and yielded 41 runners, 14 of which won headed by the listed-winning La Hoguette (Fr), bred and raced as many of the sire's good ones have been by Augustin-Normand and trained by Rouget. The promising start warranted a small fee raise up to €7,000, but it was another winner from that first bunch, Avenir Certain (Fr), that would send Le Havre into the stratosphere in 2014 by completing the Pouliches/Diane double. The G2 Prix du Chaudenay and G3 Prix de Lutece wins of Auvray (Fr) added further clout, and Le Havre was priced at €20,000 for 2015.

Avenir Certain's Classic double was remarkably repeated just two years later by another daughter of Le Havre, La Cressonniere (Fr). Another standout from 2016 was the G3 Prix Vanteaux winner Zghorta Dance (Fr), who was bought by Al Shaqab Racing for €550,000 at Arqana December last year as part of the Isaam Fares dispersal.

Le Havre maintained a career-high €60,000 fee in 2017-the year his first-crop son Suedois (Fr) won the GI Shadwell Turf Mile–and 2018 and while he has dipped down to €45,000, if he keeps up his current momentum he'll be hitting new heights before long. And Le Havre's success in 2019 has not been restricted to France: his leading earner this year is Rymska (Fr), who broke her maiden and won in listed company in her country of birth in 2016 before being sold and transferred to trainer Chad Brown, for whom she has now won four graded stakes, including the GII Hillsborough S. in March. She was most recently second to Rushing Fall (More Than Ready) in the GI Jenny Wiley S. at Keeneland in April.

Le Havre also has a significant flagbearer in Japan, the 3-year-old filly Pourville (Jpn). Pourville was foaled in Japan after Teruya Yoshida purchased her dam Kenhope (Fr)-incidentally by another homegrown French stallion in Kendargent-and she was deemed good enough to contest the G1 Oka Sho (Japanese 1000 Guineas) after winning the G2 Hochi Hai Fillies' Revue in March. Pourville was not disgraced in the Oka Sho, finishing sixth and beaten four lengths, and the margin was the same when she checked in 12th in the May 5 G1 NHK Mile Cup against older horses. Pourville's year-to-date earnings of $410,649 are not included in the aforementioned TDN sire list, which is restricted to European and North American earnings.

Le Havre's Normandel (Fr), a listed winner in France at three, took the G3 Park Express S. at Naas on Mar. 24 and the sire's five group winners thus far in 2019 are completed by the G3 Prix Vanteaux victress Platane (Fr). He also had a listed winner in Italy on Saturday.

There should be plenty to look forward to when Le Havre's latest 2-year-olds, bred on a €35,000 fee, beginning hitting the racetracks, and he was well enough in demand in the sales rings last year. His yearlings offered were led by a 850,000gns filly at Tattersalls October and also included a €360,000 filly at Orby and a €240,000 filly at Arqana August. He could have another stakes representative in Japan too after Paca Paca Farm spent 200,000gns on a colt foal at Tattersalls December. Perhaps buoyed by the success of Rymska, America's Eclipse Thoroughbred Partners took home a Le Havre filly from Orby for €160,000. This year's yearlings and foals by Le Havre were bred on a €60,000 fee, so this is likely not the last we'll be seeing of the sire in the headlines.

While Le Havre is the leading flagbearer among the French stallion ranks this year, he isn't the only one. Haras de Bonneval's Siyouni (Fr), who stands for €100,000 for the first time this year, leap-frogged over compatriot Kendargent (Fr) to grab seventh on the sires' stable after his five-time Group 1 winner Laurens (Fr) resumed with a second in the G1 Lockinge S. on Saturday. The country's true rags to riches stallion, Kendargent, has three stakes winners in 2019 headed by last week's G3 Ormonde S. winner Morando (Fr) and Godolphin's G3 Prix Exbury winner Soleil Marin (Ire).

While Kingman is the runaway leader of the second-crop sires year-to-date, the winners just keep coming in for Haras de Bouquetot's Olympic Glory (Ire) and Toronado (Ire), who sit third and fourth by earnings. The latter actually leads his sire crop this year by winners with 24, while Olympic Glory is on 15.