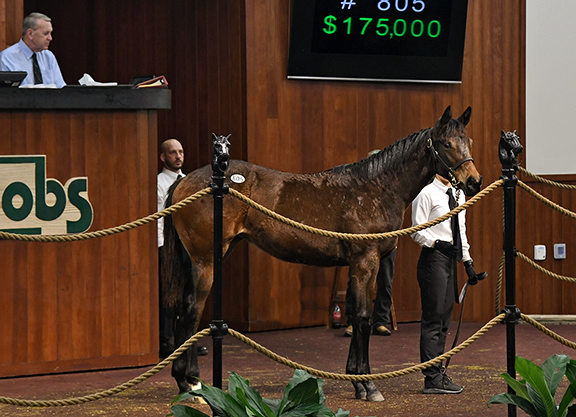 A filly by fast-starting young sire Laoban (Hip 805) topped Wednesday's open session and the entirety of the OBS Winter Mixed Sale, selling to Nick de Meric, who signed as Sand Hill Stables, for $175,000. Consigned by McMahon of Saratoga Thoroughbreds, the bay was bred in New York by the late Kenny LeJeune.

A colt from the first crop of MGISW Mor Spirit (Eskendereya) (Hip 616) brought the day's second-highest price, hammering for $115,000 to bloodstock agent Donato Lanni. The bay was bred in Florida by Beth Bayer, who consigned the colt.

“He was a cool horse,” said Lanni. “When you lock onto a nice horse, you have to stretch a little bit more. He is just a good-looking, athletic racehorse. I just hope we get lucky.”

An $85,000 FTKOCT buy, Mor Spirit was picked out by Lanni on behalf of his owner for $650,000 at the FTFMAR sale the following year. He went on to win six of his 14 races, topped by a victory in the GI Los Alamitos Futurity S. and a dazzling score in the GI Met Mile.

“I was involved with the sire and he did remind me a lot of his sire,” Lanni said. “Overall, I thought the Mor Spirits looked really nice. He was just a tremendous racehorse, a really fast horse.”