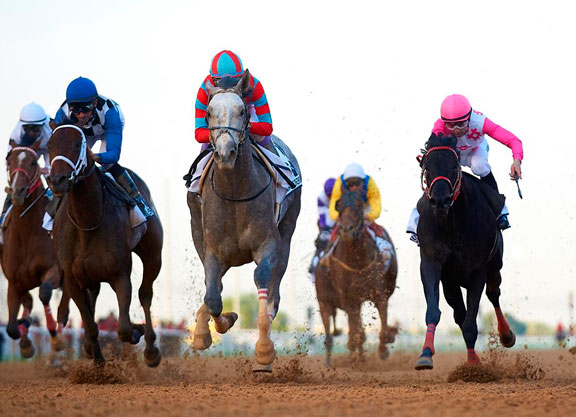 The Japanese raider Lani (Tapit) claimed the scalp of hot favourite and 'TDN Rising Star' Polar River (Congrats) to win this Group 2 contest. Ridden by Japanese star Yutaka Take, Lani came with a late surge a furlong from home to gun down compatriot Yu Change (Jpn) (Swift Current {Jpn}), who looked to have opened up a winning advantage at the top of the straight. Yu Change began to fold inside the last half-furlong, though, and it was Polar River who finished strongly to get to three-parts of a length from the winner with Yu Change fending off Vale Dori (Arg) (Asiatic Boy {Arg}) for third in a bunched finish. “He's a very strong horse so I really thought I had a good chance in the race,” said Take after the race. “Even though he tripped at the start he traveled really well throughout. Right now he's still rather immature so he's got a lot of growing up to do. He's getting better and better and I'd like to go to Kentucky [for the Derby],” added the winning jockey.

Polar River was undoubtedly a shade unlucky here as Pat Dobbs was blocked a split when challenging between horses early in the straight. Switched widest, she then stuck to her task gamely and lost little in defeat. Trainer Doug Watson was proud of her effort and commented, “She was tight for room at a critical point after the turn-in. She stayed on very well again at the end. If anything she's still a bit green. But going forward she's going to be a superb filly as she matures. It was still a good run.”

The winner, Lani, kicked off a successful day for the Japanese raiders and the victorious trainer Mikio Matsunaga said, “I am so happy, I don't really know what to say. I was a bit worried after he stumbled at the start, but he showed how good he really can be today and Take rode a great race.” The trainer was also appreciative of the Meydan officials who allowed him to saddle the excitable colt away from the crowds.

“The Meydan staff has been very kind to us, allowing us to take the best care of Lani as possible. He can be very troublesome so we really appreciated the allowances given to us by the track staff,” added Matsunaga. Connections are keen on a GI Kentucky Derby bid and the owner's son, Koki Maeda, said, “We always knew he was special. We would really like to win the Kentucky Derby and based on how he ran over this surface, I think he'll be able to run well in Kentucky if we go. If there is nothing wrong with the horse after the race and Mr. Maeda wants to go, we will send him to the Kentucky Derby.”

On pedigree Lani certainly has the credentials. He is by elite stallion Tapit (Pulpit), out of Japanese Group 1-winner Heavenly Romance (Jpn), who has already produced two other stakes winners in Amour Briller (Jpn) (Smart Strike) and Awardee (Jungle Pocket {Jpn}).