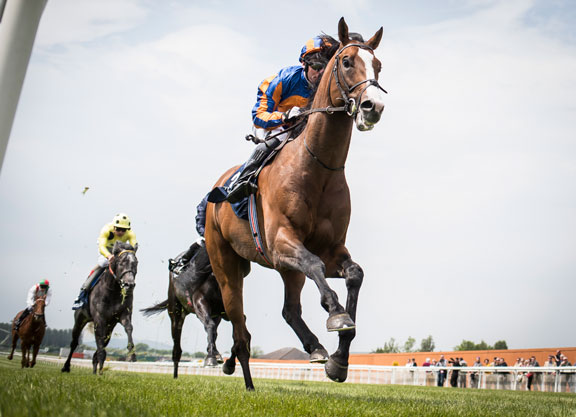 G1SW Lancaster Bomber (War Front-Sun Shower {Ire}, by Indian Ridge {Ire}) has been retired and will stand at the National Stud in Newmarket in 2019. The Aidan O'Brien trainee's stallion career will be managed by the Avenue Bloodstock team of John Ferguson, Mark McStay and Amy Lanigan. Lifetime breeding rights will be sold and the G1 Tattersalls Gold Cup hero will command a fee of £8,500, Oct. 1, SLF.

Bred by the Sun Shower Syndicate in Kentucky, the bay was off the mark at second asking at Leopardstown at two and ended his season with back-to-back Group 1 seconds in the Dubai Dewhurst S. and Breeders' Cup Juvenile Turf. At three, Lancaster Bomber played the bridesmaid in the G1 St. James's Palace S. at Royal Ascot, in Woodbine's GI Ricoh Woodbine Mile S. last September and in the 2017 GI Breeders' Cup Mile at Del Mar from a nine-start campaign. Third in the G1 Al Shaqab Lockinge S. second up at Newbury in May, he landed the Tattersalls Gold Cup at The Curragh and retires with earnings of $1,422,743 and a mark of 18-2-5-1.

“Lancaster Bomber has always been held in very high regard by Aidan and the team at Ballydoyle,” said MV Magnier of Coolmore. “We have placed a lot of faith in his sire War Front, and thankfully it is being rewarded. We have retained some breeding rights in Lancaster Bomber and feel that his retirement to the National Stud in Newmarket affords him an excellent opportunity to make an impact as a stallion.”