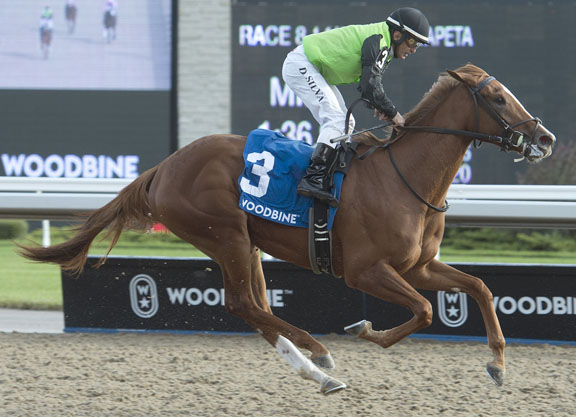 A pair of fillies, including Canada's reigning champion 2-year-old filly Curlin's Voyage (Curlin), will take aim at 13 sophomore colts in Saturday's $1-million Queen's Plate S., historically the first jewel in Canada's Triple Crown. The winner of the Aug. 15 Woodbine Oaks, the Hill 'n' Dale Equine and Windsor Boys Racing-owned filly is trained by Josie Carroll, who previously won the 10-furlong Classic with another filly–Inglorious in 2011–and with Edenwold in 2006. In this renewal, Carroll will also saddle Belichick (Lemon Drop Kid)  and Mighty Heart (Dramedy).

“We've always thought very highly of her after her 2-year-old debut,” said Carroll of Curlin's Voyage, who won last season's GIII Mazarine S. and Ontario Lassie S. against Ontario bred fillies. “She's a very uncomplicated filly and does everything you ask of her.”

Prior to her Oaks victory, Curlin's Voyage won the seven-furlong Fury S. July 5. and finished runner- up in the June 13 Star Shoot S.

Also representing the fairer sex in the Queen's Plate, Merveilleux (Paynter), runner up in both the restricted Princess Elizabeth S. and Ontario Lassie S. last season, kicked off 2020 with an allowance score at Woodbine June 21 before finishing fourth in the GIII Selene S. July 25. Most recently, she finished a troubled third in the Woodbine Oaks.

“Honestly, I just think she's just been a very unfortunate horse this year, racing luck wise,” said trainer Kevin Attard. “Things haven't quite gone her way. I had high expectations for her in the Oaks. She showed a lot of talent at two and we were really excited to have her. With her, we considered the Plate right from the get-go. The mile and a quarter distance is not going to be an issue for her.

He continued, “She's just one horse that you're hoping on that day everything goes right for her and she finally gets a clear run, no obstacles, no hurdles–that way she can prove whether she's good enough or not and there's no excuses. She's doing very well and I'm quite please with her.”

Attard also saddles morningline favorite Clayton (Bodemeister). Campaigned by Donato Lanni and Daniel Plouffe, the colt is a winner of three of four lifetime starts, including his latest in a Woodbine optional claimer July 18 followed by the nine-furlong Plate Trial S. Aug. 15.

“He's been special from the get-go,” said Attard. “He was an impressive maiden winner, so once that happened, the bell starts ringing in your head, and you're saying, 'Hey, maybe I've got a good 3-year-old here.' He followed it up with a good race first time out this year–didn't win but had traffic trouble–and I think he learned a lot. That was encouraging. Obviously, he's won his last two since then and stretched out. He's doing everything you want him to. Hopefully, he just needs to get a little bit better one more time and maybe he can put everything together.”