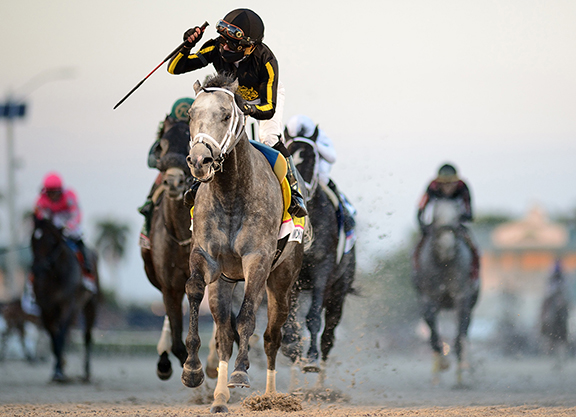 Coming off a dominant win in the GI Pegasus World Cup Invitational, Knicks Go (Paynter) is scheduled to make his next start in the $20 million Saudi Cup on Feb. 20 in Riyadh.

“As long as he breezes well this weekend, we're going to the Saudi Cup,” trainer Brad Cox said. “We plan to ship him out Monday [Feb. 8].”

Cox said the decision became easier when it became clear that Knicks Go came out of the Pegasus in perfect shape.

“The owners [the Korea Racing Authority] would like to go to the Saudi Cup and they've made that clear. I looked for a reason not to run him back in four weeks and he's given me no indication that would not be a good idea. That's why I've said I want to see him breeze one more time before we put him on a plane. He really rebounded from the Pegasus in great shape and in good order. He's not giving me any reason to not run him, so we're going to press forward.”

In Saudi Arabia, Knicks Go may be going up against the only horse in training that could possibly beat him. Charlatan (Speightstown) is being pointed to the race for trainer Bob Baffert and is coming off a dazzling win in the GI Runhappy Malibu S.

“It will be a good match-up between those two,” Cox said. “Our horse does have to make the adjustment back to one turn and we don't know how he will handle that. I do like that he handled not having any Lasix at Gulfstream just fine. That's a positive and one thing we have going for us. He's in great form right now and, hopefully, we can keep him that way.”

With explosive early speed, Charlatan and Knicks Go have the same running style, which could cause a problem for both.

“Sure, that is a possibility,” Cox said when asked about the potential of a speed duel. “It will be up to the jockeys. Once the post positions are drawn, we'll have to handicap the race and we will know more after that.”

Joel Rosario will ride Knicks Go in the Saudi Cup and Mike Smith has the mount on Charlatan.

While some may believe running in both the Saudi Cup and the Mar. 27 Dubai World Cup may be asking too much of a horse, Cox said the $12 million race at a mile-and-a-quarter is also a target.

“Dubai is definitely under consideration,” he said. “The team that we have shipping over to Saudi Arabia has been told to pack enough clothes for several weeks. As long as he runs well in Saudi Arabia and comes out of it in good order, we will turn our attention to Dubai.”