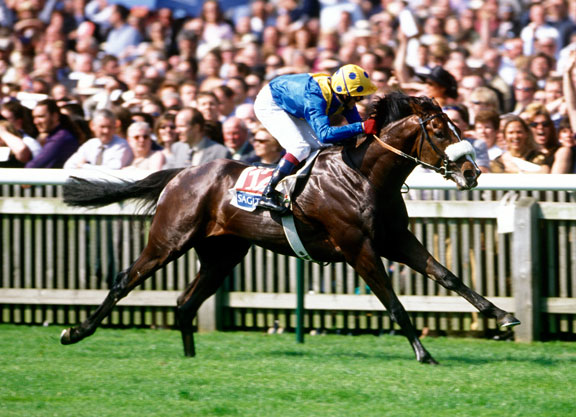 King's Best (Kingmambo-Allegretta {GB}), by Lomard {Ger}), winner of the G1 2000 Guineas and sire of G1 Investec Derby and G1 Prix de l'Arc de Triomphe winner Workforce (GB), has been pensioned from stud duty and will live out his retirement at Darley Japan, Racing Post reports.

“King's Best seems to be really enjoying his retirement in Japan,” Darley Japan President Harry Sweeney told Racing Post. “He remains in his old stall in the stallion barn and is flanked by Furioso on one side and Dubai World Cup winner Monterosso on the other. American Patriot, who joined our roster last year, is across the passageway from him.”

Racing for owner Saeed Suhail and trainer Sir Michael Stoute, King's Best beat Giant's Causeway in the 2000 Guineas but his career was cut short when he was injured and pulled up next- out in the G1 Irish Derby. He stood his first eight seasons in Ireland, and four years in France preceded a move to Japan in 2013.

“For a horse 22 years of age he remains in great health and goes daily to his paddock as usual,” Sweeney added. “He has given very distinguished service to Darley and in addition to Ireland has stood in France, Argentina and Australia before coming to Japan. He has certainly earned his retirement.”