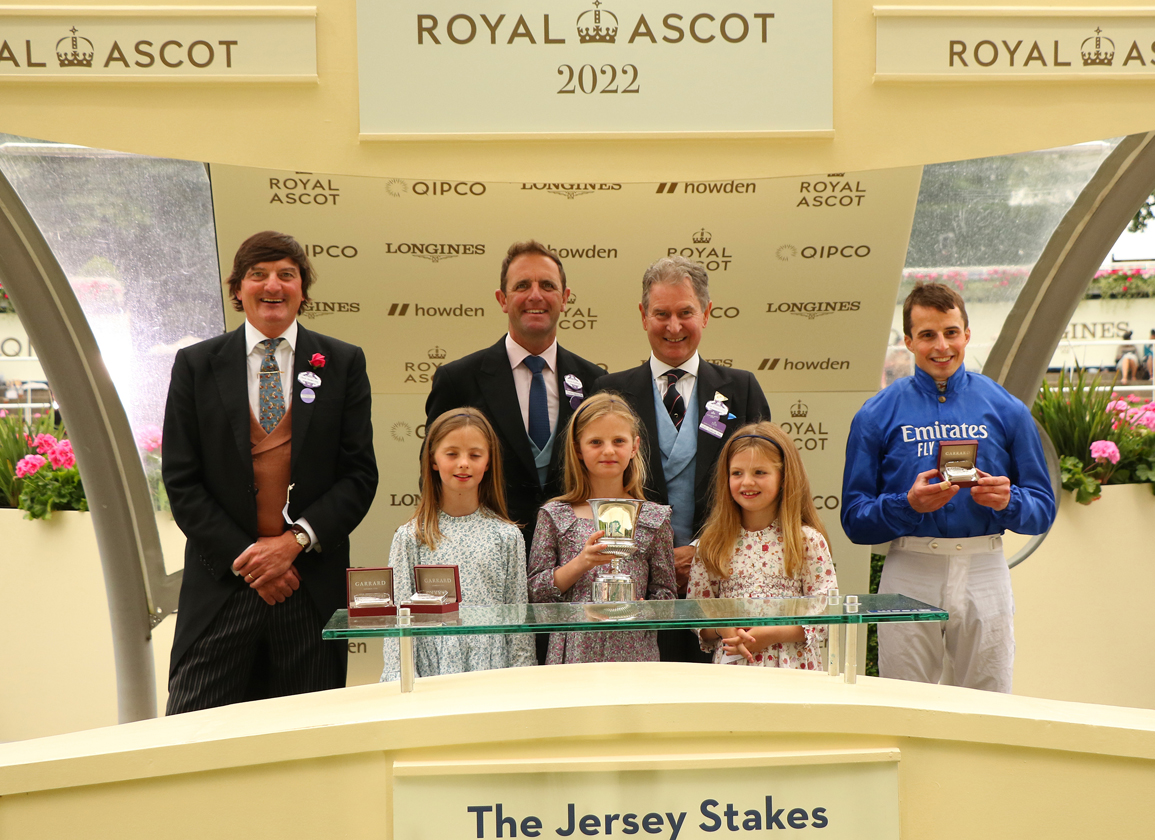 Charlie Apple and his daughters with William Buick after Noble Truth's win | Racingfotos.com

There is something about the straight track at Ascot that seems to bring out the best in Charlie Appleby's runners and Saturday's G3 Jersey S. had a familiar feel as last year's winning team again prevailed with Noble Truth (Fr) (Kingman {GB}). Talented at two, the Listed Flying Scotsman S. winner and G1 Prix Jean-Luc Lagardere runner-up had threatened to head south mentally but a gelding operation after his latest six-length success in Newmarket's Listed King Charles II S. over this seven-furlong trip Apr. 29 put him on the right road. Out in front from the break as he had been there, the 4-1 favourite was joined by the eventual sixth Samburu (GB) (Kingman {GB}) for a period two out and could have caved in, but kept digging for William Buick to regain command heading to the furlong pole and score by a length from the slow-starting Find (GB) (Frankel {GB}), with Dubai Poet (GB) (Lope de Vega {Ire}) a neck away in third. Appleby, who saddled Creative Force (Ire) to emerge best in this 12 months ago, has something ambitious in mind for the winner. “I am trying to find a horse for The Golden Eagle in Australia and he might be the type of horse for it,” he said. “We'll start to make a plan.”

Noble Truth, a €1.1million Arqana Deauville Select graduate, began his career with a third behind Lusail (Ire) (Mehmas {Ire}) and this race's runner-up Find at Newmarket last June before beating the smart Ehraz (GB) (Showcasing {GB}) at the July Festival and running fourth in the G3 Acomb S. at York's Ebor meeting. Taken to his third festival at Doncaster in September, the bay denied Hoo Ya Mal (GB) (Territories {Ire}) in the Flying Scotsman before finding only Angel Bleu (Fr) (Dark Angel {Ire}) too strong in the Jean-Luc Lagardere on Arc day and throwing away his chance when third having raced too keen in Newbury's G3 Horris Hill S. later in October. Tried on dirt in the Feb. 26 G3 Saudi Derby, he beat one rival there but was back in the groove allowed to dominate and race alone in the King Charles.

“Compared to his last run, when he was still a colt, he was much more professional today,” Buick said. “He has so much energy and today he was able to channel it in the right direction. He's got lots of speed, but today I was able to ride him a little bit whereas in the past I have been a passenger. He's always had plenty of ability and hopefully that discipline will be the start of him fulfilling his potential. I wanted to go on the rail, but he was just lugging away from it. Frankie came [on Samburu] and headed me and that kind of helped this lad get motivated. He's very tenacious and really sticks his neck out.”

Appleby added, “This horse has not been an easy horse to ride–he pulls like an express train every morning. Nathan, who rides him at home, deserves a lot of credit and we decided that, if we wanted the horse to go forward again then he had to have the cruellest cut! It was the right thing for him and in the last 10 days, Nathan had said he was starting to listen to him. When he got headed, I thought it would be interesting and I didn't expect him to find the way he did.”

Find was regaining his early two-year-old form after a spell in the wilderness and his rider David Egan said, “It was a very good performance. He is the sort of horse who runs the same race in a handicap as he does in a group race. It was a brave shout by the team to run him in this, as he was the lowest-rated in the race, but I was happy that the field converged around him and he got a lovely tow into the race. He does a lot on the bridle, but actually found for me today and galloped all the way to the line.” Dubai Poet's rider Andrea Atzeni said, “He has run a blinder. We have tried different trips for him–he tried 10 furlongs and didn't stay. We weren't sure about the ground, but it has really suited him. It was a nice run and I think a mile will be better.”