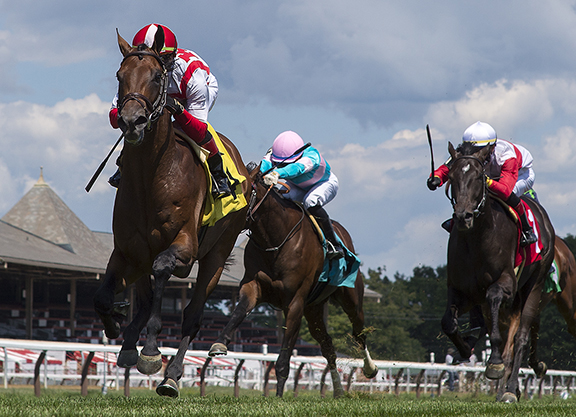 2nd-Saratoga, $72,000, Msw, 8-15, 2yo, 1 1/16mT, 1:42.55, fm.
PUBLIC SECTOR (GB) (c, 2, Kingman {GB}–Parle Moi {Ire}, by Montjeu {Ire}) engaged in a battle for pari-mutuel supremacy with stablemate Polinesia (American Pharoah), a son of GSW Super Majesty that cost $800,000 at Keeneland September last fall. Off as the 2.15-1 chalk to Polinesia's 27-10, Public Sector raced with just two rivals behind him around the first turn and settled at the back of the leading group through the middle furlongs. Appearing full of run nearing the stretch, the 170,000 Tattersalls October Book 1 purchase was steered out five wide into the lane and kicked it into high gear with a final five-sixteenths in a very sharp :29.77 to score by two decisive lengths. Scarlett Sky (Sky Mesa) was second, while Polinesia raced greenly early on, settled in range in the second flight of horses but finished at one pace to be fifth, beaten just under four lengths. The eighth U.S. winner from 13 runners for his successful young, sire, Public Sector is out of a daughter of French MGSW Di Moi Oui (GB) (Warning {GB}), the dam of MSW Toi Et Moi (Ire) (Galileo {Ire}), also an Italian highweight off a runner-up effort in the G3 Premio Verziere. Toi Et Moi passed away this year. Parle Moi produced a colt by Golden Horn (GB) this year. Sales history: 170,000gns Ylg '19 TATOCT. Lifetime Record: 1-1-0-0, $39,600. Click for the lEquibase.com chart or VIDEO, sponsored by Fasig-Tipton.
O-Klaravich Stables Inc; B-The Kathryn Stud (GB); T-Chad C Brown.