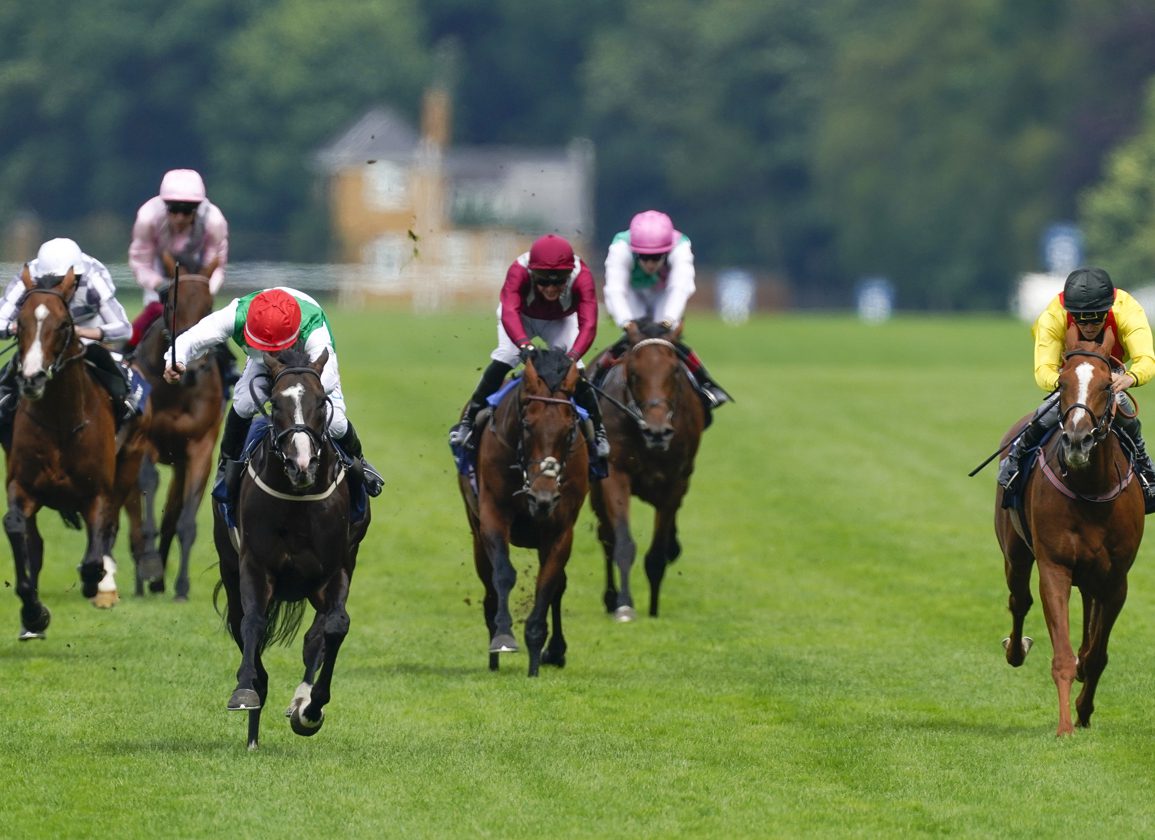 The heat was on in Saturday's G1 King George VI And Queen Elizabeth QIPCO S. at Ascot, a “Win And You're In” for the GI Longines Breeders' Cup Turf at Keeneland in November, and there was no hiding place as Pyledriver (GB) (Harbour Watch {Ire}) proved ruthless to prevail for the William Muir and Chris Grassick stable and jockey P J McDonald. Sent off at 18-1 with a below-par second in the June 3 G1 Coronation Cup last time tempering enthusiasm, last year's winner of that Epsom prize was always in his comfort zone with an ideal pace scenario tracking the hard-working duo Westover (GB) (Frankel {GB}) and Broome (Ire) (Australia {GB}). Sent by that tiring pair passing the two pole, the contest was decided surprisingly quickly and he lengthened clear for an emphatic 2 3/4-length success from Torquator Tasso (Ger) (Adlerflug {Ger}) as they opened up an eight-length gap to the slow-starting Mishriff (Ire) (Make Believe {GB}). The pair of 3-year-olds, the 13-8 favourite Westover, and Emily Upjohn (GB) (Sea The Stars {Ire}), proved major disappointments as the last pair home. “I honestly believed I'd win from two weeks ago,” an understandably emotional Muir said. “I didn't care what was in it. I've said I never wanted to cry, but I want to cry today.”

Back on Dubai World Cup night, a King George win for Pyledriver would not have looked as much of a surprise as it did on Saturday afternoon, with Frankie Dettori locked up on the rail until too late in the G1 Dubawi Sheema Classic. Only fourth but widely considered unlucky not to win there, he looked to have a Coronation Cup repeat in the bag until Hukum (Ire) (Sea The Stars {Ire}) intervened and he ended up soundly beaten there ridden from the front by Dettori. This was a return to his previous best when upstaging Al Aasy (Ire) (Sea The Stars {Ire}) at Epsom last June and when second in the G1 Hong Kong Vase during a light 2021 campaign. Willie Muir had stated after his G2 King Edward VII S. and G2 Great Voltigeur S. successes at three that he would win one of these “big ones” and while the team at Linkslade Stables have had to be patient, it finally paid off in spades in one of the very biggest.

Westover's race may well have been run before he left the paddock, having got noticeably warm, while Emily Upjohn refused to settle beyond halfway and Mishriff did his now-familiar trick of handing his rivals a few lengths headstart with another tardy break. Pyledriver was the spriteliest away, but P J McDonald was keen to wait on the Irish Derby winner and Broome to come forward and provide him with a lead that the latest Epsom experience proved is vital. Torquator Tasso was the only other rival running his race in behind, but as Colin Keane started to give out the warning signals on Westover turning for home the German raider was too far out of his ground to make a serious impact on the eventual winner. Killing the race with a swift sectional from the two to the one, Pyledriver even had the energy to swerve from the whip close home as he had done when third in the St Leger.

“Today, we smashed them to pieces,” Muir added. “I actually wrote the papers for you boys tomorrow. I said 'If Pyledriver wins, the line is a poor bunch of three-year-olds again. If the three-year-olds win, a great crop'. They are a great crop, the three-year-olds. He is just a very, very talented horse and I've never lost faith in him. In our second or third year, we had a horse who came here and won a five-furlong race and we were partying in the car park for ages. When Pyledriver won the King Edward VII a couple of years ago, we would still be in the car park today if we'd been able to but we couldn't because of Covid. This is a big, big moment. It means the world to me.”

P J McDonald was quick to point to the 5-year-old's currently-sidelined regular rider Martin Dwyer. “I feel so sorry for Martin, these horses are so hard to come by,” he said. “It happened to me getting injured when I had Laurens and I know what it feels like and what will be going through his head. He's an absolute gent and so supportive of me. He's helped me out so much over the last week. For me, these are days you don't think are going to happen. You work hard and sometimes think these chances aren't going to come and this one came to me by luck. I'm so grateful to the William and the team and to this horse. That was as smooth as it can be. The horse filled himself up going up the hill before the turn in and I just sat on him and I knew he was going to take some beating soon after. He was amazing.”