King Fury to Scratch from Derby 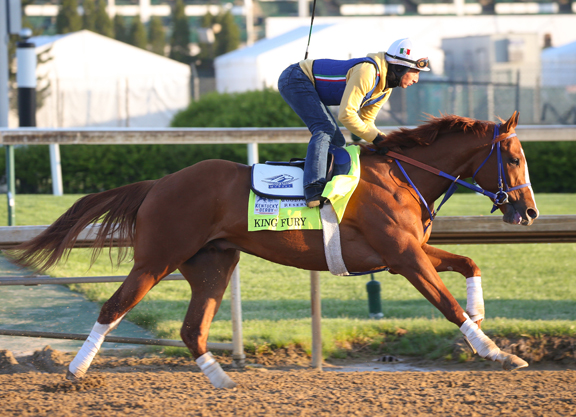 Fern Circle Stables, Three Chimneys Farm and Magdalena Racing's King Fury (Curlin) will be forced to scratch from Saturday's GI Kentucky Derby after spiking a fever Friday, his trainer Ken McPeek announced via a video on twitter. The $950,000 Fasig-Tipton Saratoga yearling and last-out GIII Stonestreet Lexington S. winner was drawn in post 16 and was 20-1 on the morning line.

“King Fury spiked a 104 fever this afternoon after he galloped this morning. He went off his feed. We obviously have to do the right thing–I feel gutted for [owners] Paul Fireman and Goncalo Torrealba and [jockey] Brian Hernandez and all the people who have worked so hard to get him to this race, but unfortunately, he is not 100%,” McPeek said. “This is a horse who has been doing well all week–anyone who watched him train had to be impressed, I know I was. We felt pretty confident going into this race. We had a big chance. We're obviously going to scratch him, on veterinarian advice–which is an easy one. We'll take him out, regroup and point to another race. I think you'll probably see this horse pointed for the [Aug. 28 GI] Travers, which I think is a great spot.”