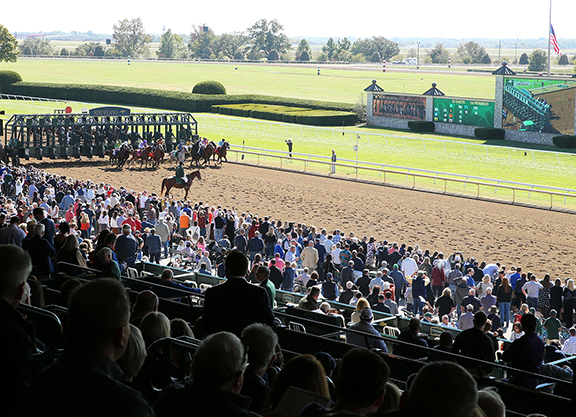 The Kentucky Horse Racing Commission (KHRC) voted unanimously Monday to phase out race-day Lasix, according to reports in Daily Racing Form and the Louisville Courier-Journal.

Race-day Lasix administration is scheduled to be barred in 2-year-olds beginning in 2020, and the use of the drug will be eliminated in stakes for all ages starting in 2021.

The Dec. 9 Lasix vote followed a November recommendation to adopt the phase-out by the state’s Equine Drug Research Council, which serves as an advisory board to the KHRC.

The Courier-Journal noted that the KHRC is a state board that is subject to gubernatorial appointment. The monthly meeting had originally been scheduled for Dec. 10, but it was moved up a day to Dec. 9, coinciding with the final day of Governor Matt Bevin’s outgoing administration.

“We do not want to be an island,” Dr. Bruce Howard, the KHRC’s equine medical director, was quoted in the Courier-Journal.

KHRC member Pat Day, a retired Hall of Fame jockey, said, “I can see the need to get it done and be the leader in the pack,” according to the Courier-Journal.

Daily Racing Form‘s Nicole Russo reported on the logistics of the phase-out:

“The proposed rule changes are written to go into effect on Jan. 1, 2020 and 2021, respectively. However, the changes are subject to additional formal steps before implementation, which could affect the dates they come into practice. The standard procedure for any ordinary regulation or proposed state law change is a legislative review process and approval, and a public commenting period. Only then can it be implemented on the racetrack. John Forgy, the general counsel for the KHRC, indicated that this process typically takes anywhere from five to eight months…

“[But] unlike ordinary regulations, proposals submitted as emergency regulations may be immediately approved by the governor of the state. The KHRC voted that its Lasix proposal be advanced to the governor’s office to be considered under either category. If the governor chose to give the proposal emergency consideration, it could be approved in time for the Jan. 1 date; if not, it would go through the ordinary process.”