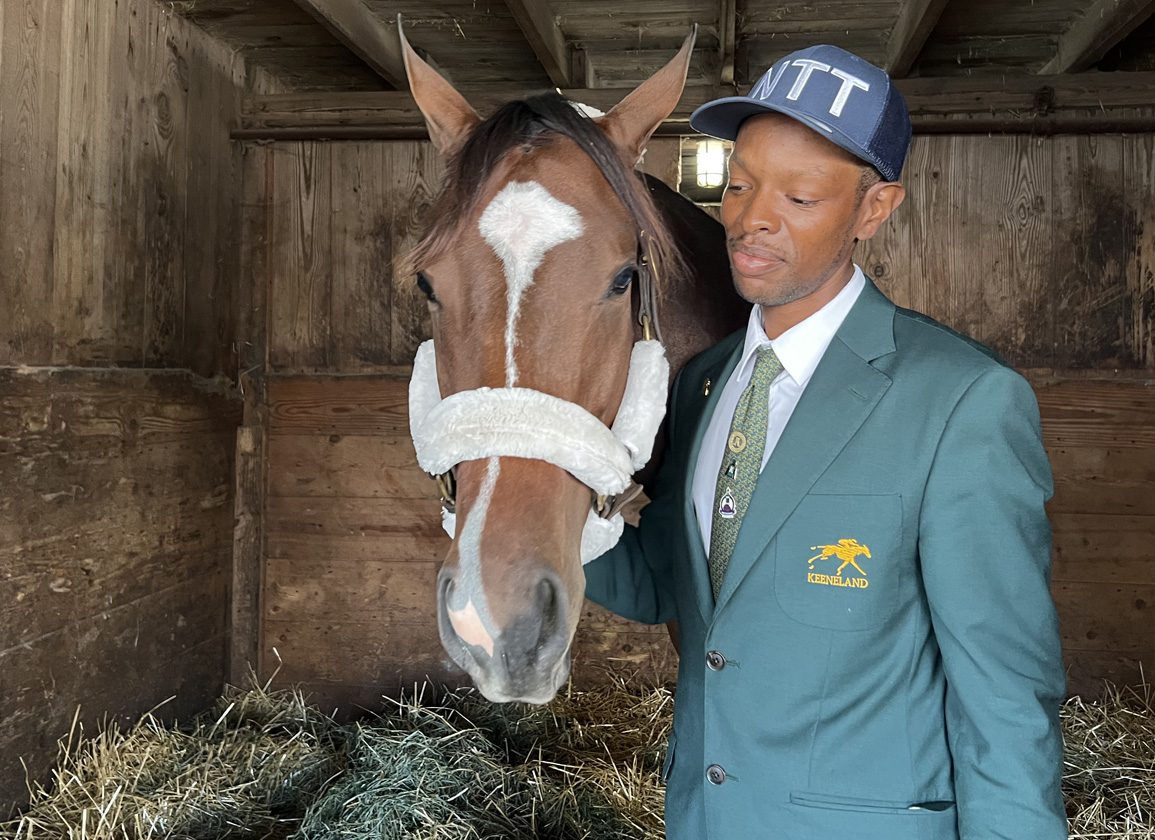 Of all the pinhookers at this year's Keeneland September Sale, DeJuan Smith has definitely taken the most hands-on approach. While some sellers might watch anxiously from the back ring or in a seat in the sales pavilion, Smith will quite literally be on the shank of his own horse as it goes through the sales ring.

Smith is a ringman for Keeneland and also a show person for Taylor Made Sales. On Thursday Hip 3452, his first pinhook project, will sell with Taylor Made.

Could Smith be the first person to ever handle his own horse in the esteemed Keeneland sales ring? Quite possibly.

Smith has led hundreds–if not thousands–of horses through the ring, but will he be nervous for this particular sale?

“Yes,” the horseman said without a moment's hesitation. “I just want people to like him and for him to go to a good home.”

“He has a good mind and he's a very strong horse,” Smith explained. “He covers the ground with a nice, big walk and he's balanced through his shoulder and hip.” 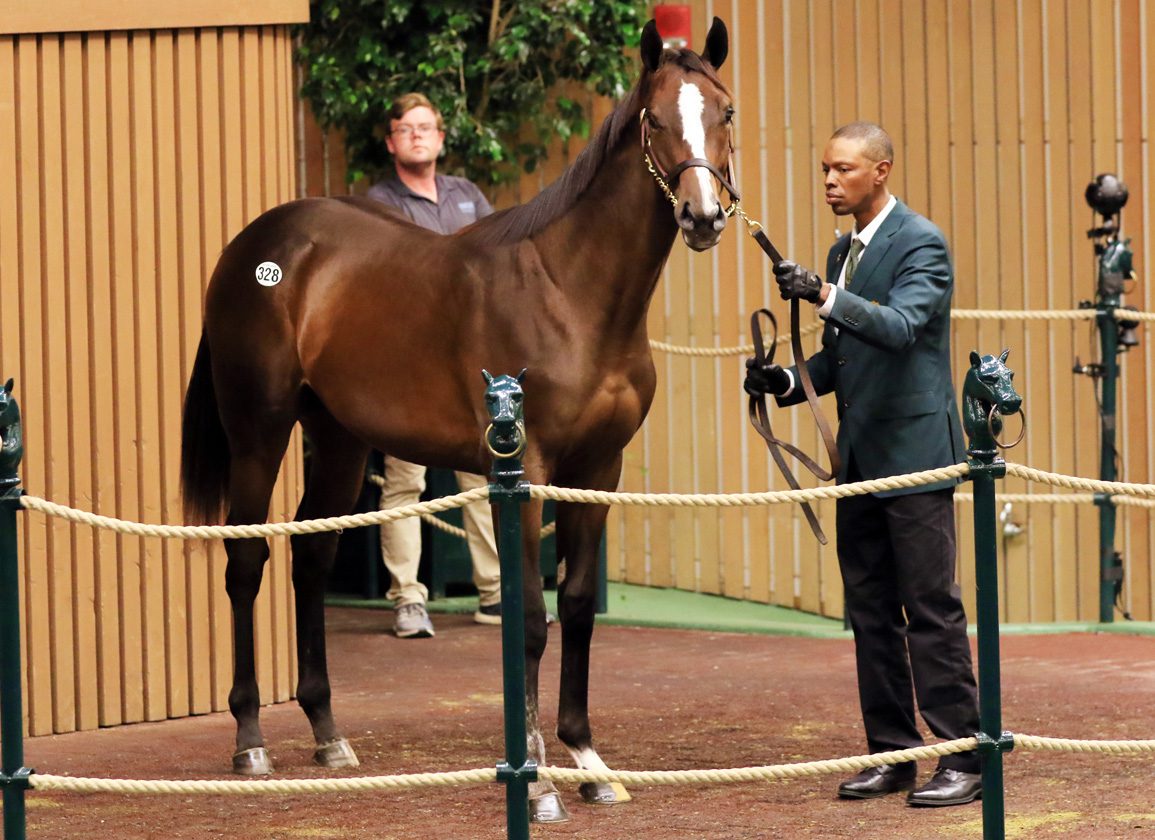 Smith and his wife Madeline have had a long-term goal of getting involved in the pinhooking game. They decided to take action at this year's Keeneland January Sale. Smith knew he would not have time to peruse the sales grounds looking at horses himself since he would be busy showing at the Taylor Made consignment in the mornings and then working as a ringman throughout the day, so he asked Mark Taylor to pick out a few prospects. They ended up with the Palace Malice colt, a $23,000 purchase, as well as a Preservationist colt who is from the family of champion Halfbridled (Unbridled) and will sell as Hip 4010 on the final day of the sale this week.

Both yearlings have developed at the Smiths' home in Florida, where the couple meticulously prepped them for the sale themselves.

“We've broke them too,” Smith said. “They're already ready for a rider. We probably took a month off of training for someone when they purchase these horses. They love apples and carrots and peppermints. Most yearlings don't know about treats like that, but my wife has them eating out of your hand. When you look at these yearlings and see how good they look, that's all her. That's not Show Sheen. It's just natural shine from her grooming them.”

Smith, who has built an impressive resume in the industry since he first got started in 2008, is the only member of his family to be involved in the sport. He described how his childhood in New York City was a drastically different environment than where he is today.

“We didn't have anything,” he said. “It was my mom, my brother and me and we were living between shelters and moving around the city a lot. My mom had some personal issues so we eventually had to go with her sister for a bit until she got straightened out.”

Smith was a self-described 'knucklehead' as a teenager, but when he and his family moved to Virginia, it was there that he was introduced to horse racing.

At a party, he met the son of Dale Jenkins, brother of legendary show jumper and trainer Rodney Jenkins. Smith was instantly interested in the business and began helping his new friend turn out horses and scrub water buckets. 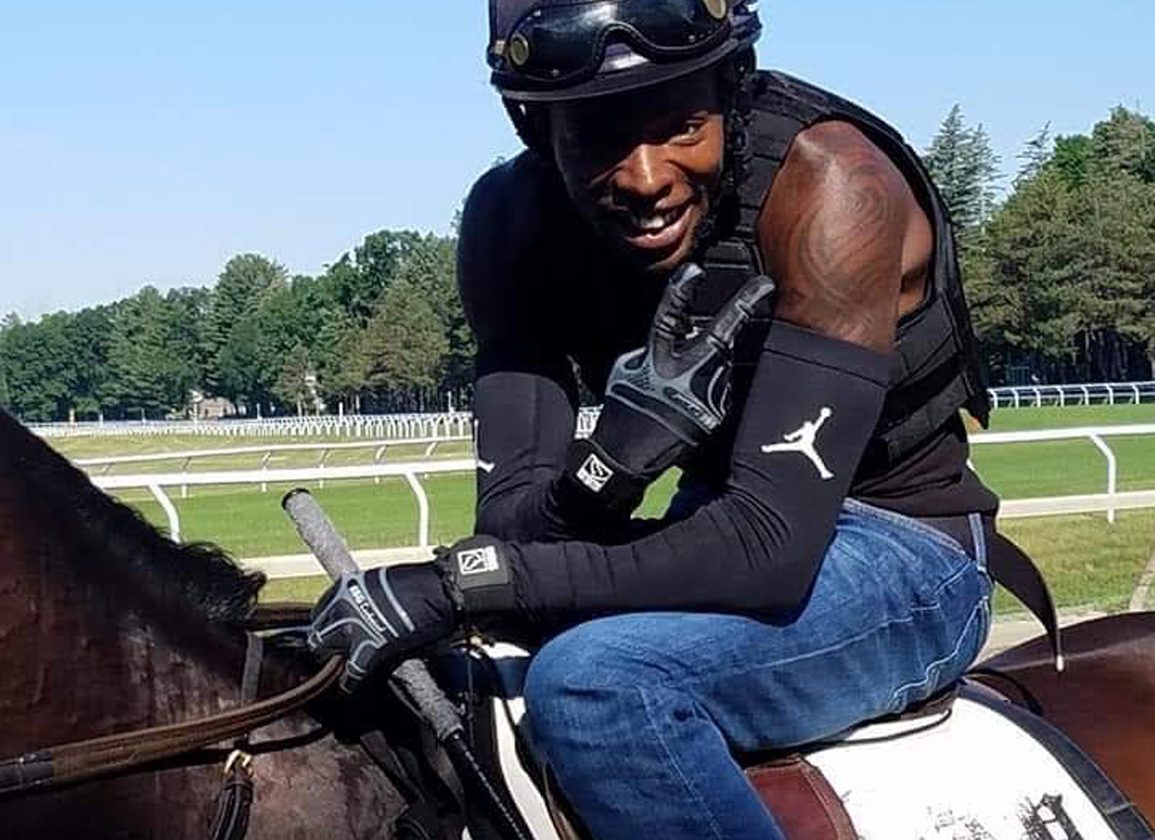 Smith said his favorite job in racing is riding, exclaiming that he has, 'A need for speed!' | photo courtesy DeJuan Smith

He began working as a groom at various farms and major sales, and eventually claimed a horse for $500 at Charles Town. The filly won several races and when it came time for her to retire, Smith decided to teach himself how to ride.

“Nobody ever has time to teach you,” he said. “So I just watched what other people did. I'm perceptive in that way.”

From there, he looked to get involved with the 2-year-old sales.

“I knew how to ride and had been working the yearling sales, but it's very hard to get in when people haven't seen you ride,” he said. “Eventually Kip Elser [Kirkwood Stables] gave me a shot. I'm still an assistant trainer for him to this day. At the time he had some difficult horses and people saw how I handled them, so it kind of gave me a name.”

When Smith wanted to try his hand on the racetrack, he spent several summers exercise riding in Saratoga for Todd Pletcher and Jonathan Thomas, riding the likes of Grade I winners Audible, Always Dreaming and Catholic Boy. It was there that he met his wife Madeline, who was working for trainer Jeremiah Englehart.

While riding is easily his favorite job amongst all the many hats he has worn, Smith said that he and his wife hope that their pinhooks this week at Keeneland September will serve as the launching point for them to get more involved in the sales arena. Smith doesn't spend much time shadowing bloodstock agents or watching the sales from the sidelines. Instead he prefers to learn in action as he shows horses at Taylor Made and works as a ringman.

“Even when you're doing stuff like that, you're meeting people and they're telling you about confirmation and pedigrees and everything,” he explained. “The more you're around it, the more you learn. Right now I'm trying to learn the sales business and make a bit of money. I still have a lot to learn, but I think I'm pretty good at the confirmation part.”

Once the Keeneland September Sale concludes, Smith will catch a flight west to help run a consignment for the Fasig-Tipton California Fall Yearlings and Horses of Racing Age Sale. From there, he'll be in Florida for the OBS October Sale and then will head back to Kentucky for the fall breeding stock sales. After that it's back home to Ocala, where 2-year-old consignors are already clamoring for his help leading into the juvenile sales season.

Smith explained that he is a completely different person than he was before he got involved in racing and he credits people like Mark Taylor and John Hall, the late, longtime yearling manager for Taylor Made, who have helped him along the way.

“With racing, I learned that trying to be a good person and staying humble gets you farther than trying to always be looking for your next quick move,” he said. “Ever since I started with the sales, people like Mark and John Hall have been life-changing people. Their presence inspires you to do well.”

Aside from the Smiths, no one will be more excited to watch this pair of pinhooks go through the ring than Mark Taylor.

“I have a lot of respect for DeJuan,” Taylor said. “He's very loyal, smart and hard working. He's everything you would want from someone working for you, and now the fact that he owns horses is great. One of the great things about this business is that it gives the opportunity for people who have started at the bottom and have an entrepreneurial spirit to take that step and become participants. We're going to be working hard so we can help him have a good sale.”

“We're not expecting to make a fortune,” Smith said. “But we're hoping to make a return so we can get another one.”